Vermont's natural beauty and tight-knit communities make it a great place to live. Here are four Vermont cities that won't break the bank. 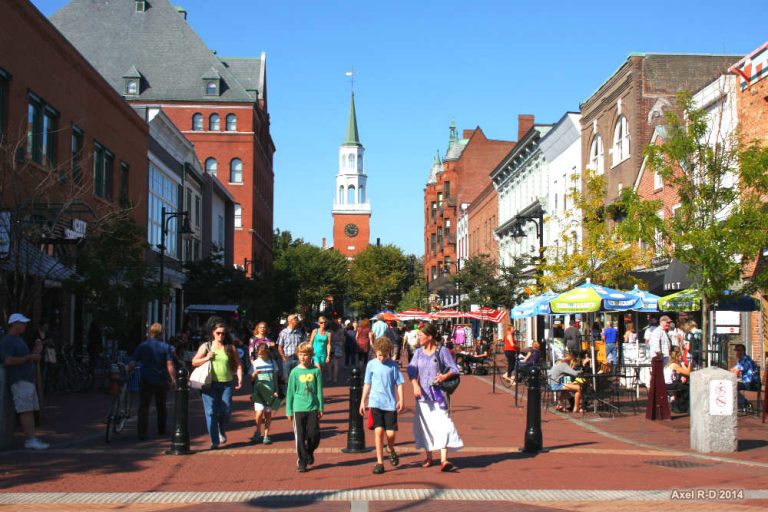 Courtesy of  Axel Drainville under a CC 2.0 license.

The Green Mountain state offers its residents many things that create a high quality of life: a thriving arts scene, innovative cuisine, year-round outdoor activities, an unemployment rate lower than the national average, and a scenic landscape that attracts visitors from around the world. However, these benefits come at a price: Vermont has a higher cost of living than many other states.

That doesn’t mean that you can’t find affordable living here, though. Although housing and utility costs might be higher than in other regions of the United States, when you factor in the convenience of small-town life that many of Vermont’s cities offer as well as the strong school systems, access to high quality medical care, and relatively short commutes, it’s easy to see why so many people want to make a home here. Here are four places that make the cost of living there worth it.

Located just nine miles north of the resort town of Stowe, Morrisville provides all the benefits of living in a tourist mecca but at a much lower cost. With a population of 2,400, residents enjoy small-town life with big-city amenities, including the top-notch Copley Hospital, several highly rated restaurants and microbreweries, and numerous recreational facilities, including the Lamoille Valley Rail Trail.

Though the median household income is only $38,684, the median home price is $174,800, which is five percent lower than the national average. The public schools in Morrisville have an extraordinarily low student-to-teacher ratio of 11:1, and the schools spend nearly $15,000 per student, compared to the national average of $12,383. Many residents are employed in the local area, with nearly 12 percent walking to work.

There’s no need to travel to the big city for a night out in Morrisville. The Bijou Cineplex movie theater and several highly rated restaurants and music venues can be found right downtown.

Vermonters Wanted: How Vermont Is Turning Tourists Into Residents

With a population of 42,570, Burlington is the largest city in Vermont, but it still retains a close-knit vibe. Residents are active in the community, whether through shopping at the bustling farmers market in City Hall Park, exploring the local art scene during the South End Art Hop each September, or attending one of the many music, cultural, or food and drink festivals held on the Lake Champlain waterfront.

Like much of Vermont, Burlington boasts a low employment rate of 3.3 percent. Several tech companies, such as Burton and Dealer.com, attract employees with their well-paying jobs and generous benefits. The city is also committed to energy efficiency, becoming the first city in the country to run completely on renewable energy back in 2015.


Need More Convincing? Here Are 8 Reasons to Move to Burlington


Education is a priority in Burlington. The public schools spend over $21,000 per student each year and offer many extracurricular programs, from a student-run food truck(!) to community gardening to sports of every type, to enrich kids’ learning experience. Burlington is also home to the University of Vermont and the private Champlain College, which lends the city a youthful vibe.

The median household income is $44,671, which does make the median home price of $265,800 a bit steep. However, Burlington’s small size enables many to walk or bicycle everywhere, which cuts transportation expenses down considerably.

The country’s smallest capital city – and the only one without a fast-food restaurant – Montpelier offers a lot of living in a small package for the 7,705 people who call it home. Quirky cafes, artisan shops and a handful of well-regarded restaurants make up the city’s compact downtown. A healthy lifestyle is the norm here, with more than 17 percent of people walking to work and many purchasing their locally produced groceries at the Hunger Mountain Co-op or the Capital City Farmers Market.


Outdoor adventures are just steps away, whether you opt for the wooded Hubbard Park right in the city or venture to several of the region’s best hiking trails just minutes away. For a more indoor experience, the arts are alive and well in Montpelier. The city has movie theaters–one for blockbusters and another that screens artsy independent flicks – and a stage production company, Lost Nation Theater.

With the median home price of $229,700 and a median household income of $61,588, Montpelier has attracted its share of younger families – the median age of the population is only 43.

A small city of 7,259 on the eastern side of Vermont, Brattleboro features slightly sunnier and warmer weather than the more northern cities and towns of Vermont. The median household income of $51,472 makes the median home price of $197,100 a bit more affordable than in many other cities in the state. Nearly 58 percent of residents own their houses, and the average 15.6-minute commuting time means they have more time to enjoy their homes and the city.

Residents of Brattleboro have quick access to the outdoors of New Hampshire, which is just across the Connecticut River, as well as western Massachusetts, a mere ten miles to the south. Outdoor activities abound for all four seasons. The alpine ski resorts, Mount Snow and Stratton, are located nearby. The Connecticut River is a popular paddling destination. The Gibson-Aiken Center, a recreation and community facility, is right on Main Street.

With its population’s median age of 39, Brattleboro exudes a hip, funky vibe, as shown through the many art galleries and restaurants that line the streets of this walkable city, as well as unusual events, such as the annual Strolling of the Heifers parade.