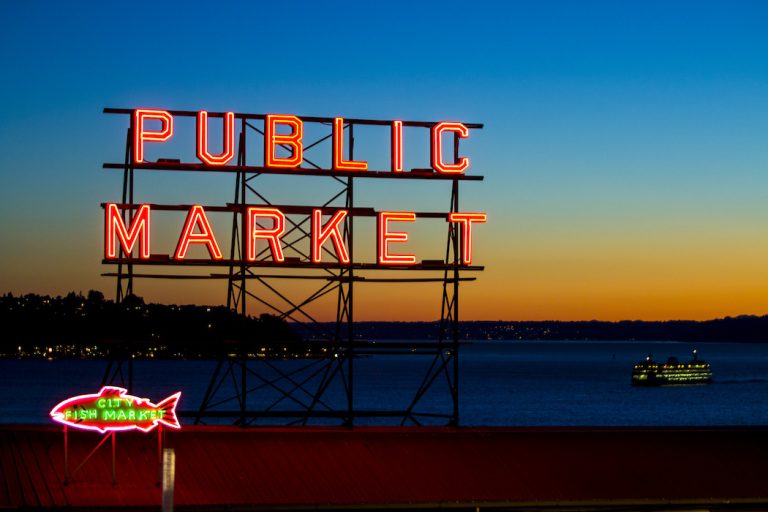 Seattle / Courtesy of Tiffany Von Arnim under a CC 2.0 license.

Seattle is the fastest-growing major city in the U.S., and remains a regional center for the performing arts along with top cuisine options and entertainment attractions. Here are 10 bucket-list-worthy options for your visit to the Emerald City.

The famed Space Needle, spanning 605 feet tall, was constructed for the 1962 World’s Fair and remains one of the most recognizable landmarks in the United States. An elevator ride starting at $20 for adults takes visitors to an observation deck 520 feet up, and meals can be enjoyed at SkyCity Restaurant.

Thriving in the downtown district since 1907 is Pike Place Market (pictured above), a year-round farmers co-op that is best known for its Pike Place Fish Market where vendors toss salmon across the room to one another, to the delight of patrons. On a lower level is a Down Under collection of small businesses, including the first-ever Starbucks.

Sightseeing boat rides are available to the public aboard Seattle-Bainbridge Island Ferry, with a 35-minute ride that provides views of Mount Rainier and the skyline of downtown Seattle. The ferry costs $7.70 round trip and boards at Pier 52 on the downtown waterfront, and walk-up passengers are welcome.

Nine acres of world-class artworks are on display at Olympic Sculpture Park, an outdoor garden stretching along a seaside bluff north of the downtown district. Seattle Art Museum owns the exhibit and offers free admission, with the park open year round. One highlight is a red, six-ton, steel sculpture called “Eagle.”

Originally opening in 1928 to Vaudeville audiences, Paramount Theatre remains a performing arts hotspot in downtown Seattle, providing entertainment such as Broadway shows, concerts, stand-up comedians and silent films. The 2,807-seat theater remains the busiest in the region and is listed on the National Register of Historic Places.

About 25 miles north of Seattle in Everett is the Boeing factory, where visitors can take a 90-minute guided tour to see jets built – including the 787 Dreamliner. The Boeing plant is the largest building by volume on Earth, and tour-goers can see “Future of Flight” exhibits as well as digitally design their own jet.

Seattle’s Children’s Museum on the ground floor of Seattle Center House is open seven days a week beginning at 10 a.m. Interactive attractions have names like Bus Stop, Grocery Store, Construction Zone and Play Café, and admission is $7.50 for children and adults. Children under one year are admitted for free.

Extending downtown from Pier 57 to Pier 59 is Waterfront Park, home to Seattle Aquarium with exhibits like Ocean Oddities and Window on Washington Waters. The park is ideal for picnics thanks to the waterfront scenery, and amenities include telescopes along with bronzes abstract statues of Christopher Columbus and Waterfront Fountain.

Founded by Microsoft co-founder Paul Allen, Experience Music Project Museum is dedicated to pop culture and has several rotating exhibits. Two popular displays are Hear My Train a Comin’: Hendrix Hits London as well as Nirvana: Taking Punk to the Masses. The museum also has hundreds of costumes from TV shows and movies.

Seattle: One of the 50 Best Cities for Entrepreneurs

Dating back to the 1880s is Seattle’s Chinatown, now often called International District because it’s a gathering place for Chinese, Japanese, Vietnamese, Filipino and other Asian immigrants. Packed with Asian restaurants and shops, the district also houses Wing Luke Museum that chronicles the life and times of Pacific and Asian Americans in Seattle.