From cheese hats to "cheese orphans" to gourmet gas station cheddar, here's how to experience Wisconsin's epic cheese scene like a hungry local. 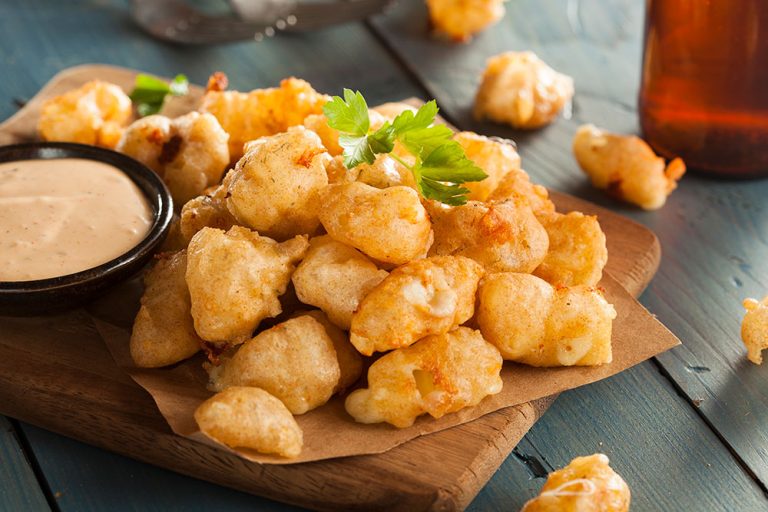 People call Wisconsinites cheese-obsessed, but we don’t really think about it like that. For us, easy access to literally the best cheeses in the country — and the world — is a given and often something we take for granted. But once you’ve lived here and then go somewhere else, it’s like cheese detox. You miss it and realize how lucky you were to live in this dairy product wonderland. The siren song of squeaky cheese curds might even be the thing that draws you back home.

Want to experience cheese like a Wisconsinite? From award-winning cheese in our gas stations to hours-old curds at our grocery store, here are just a few of the ways that you can indulge in cheese like a true Wisconsin native:

1. Indulge in the best of the best.

At the 2018 US Cheese Championship held in Green Bay, Wisconsin-made cheeses took home 168 of 348 awards presented at the competition in March, including first- and second-runner-up overall. In addition, state-made cheese swept 26 of 116 categories. Fifty-one Wisconsin cheese makers won awards, and 12 companies won five or more awards.

In the years that the World Cheese Championship has been held (every two years starting in 1958), the only US cheeses that have won have been from Wisconsin. Eleven world champions have been made here in the state; most recently, Emmi Roth’s Grand Cru Surchoix won the title in 2016.

Marieke Gouda Premium and Marieke Gouda Overjarige were the first and second runner up, respectively, at the US Cheese Championship in 2018. The Thorp-based cheesemaker also won the Grand Champion title in 2013 and second-runner in 2017. Crave Brothers in Waterloo won first and second place for their fresh mozzarella and had the second-place white cheddar curds. Carr Valley’s Cave Aged Marisa, Gran Canaria and Marisa all won best in class, while eight other cheeses ranked second or third.

Ok, we say tour, but honestly, going to the factory is about sampling some of the freshest cheese you’ve ever laid your hands on. If you head out to Carr Valley in La Valle early in the morning, you’ll have the best chance of seeing the cheesemakers in action. This company has been making cheese since 1902, making more than 50 different types of cheese. The most decorated cheese company in the U.S., Carr Valley’s Certified Master Cheesemaker, has won more top national and international awards than any other American cheesemaker.

3. Make your own cheesehead.

We here in Wisconsin don’t take ourselves too seriously. When Chicagoans started calling us “cheeseheads,” they meant it in a derogatory manner. Instead, we embraced it and made it our own. The giant foam cheese hats are sort of an international symbol of Wisconsinites. The factory that makes them has a wide variety of foam cheese products. The now-ubiquitous symbol of our state started as a single hat carved from the foam inside a couch cushion back in the mid-90s. Since then, the company has created a whole line of cheesy foam products, from koozies to Christmas tree toppers.

4. Grab some cheese for the road.

Getting the full Wisconsin cheese experience is hungry work. You’ll find yourself driving all over the state and need some road trip snacks when you do. Any full-sized interstate-adjacent gas station in Wisconsin will have at least a small display of Wisconsin cheese. Some offer up cheese and sausage snack packs. Others have fresh cheese curds. No matter what you find, you can bet that the cheese we Wisconsinites find in our gas stations is better than what most people see at their city’s best grocery stores.

Case in point? Nearly every interstate exit features a cheese factory or outlet shop on the I-94 that goes from Madison to the Twin Cities. Before leaving town, we recommend stopping at Madison’s Fromagination for local artisan cheese. Up the road is Tomah, and the Humbird Cheese store is right off the exit ramp and is the perfect place to stop for a road trip snack. They sell more than 100 tons of Wisconsin cheese from more than 25 makers yearly. It’s the ideal place to stop for a snack, though perusing the selection here will probably take longer than your standard pit stop. The most challenging part is deciding between the 5-, 10- and 12-year aged cheddar.

Though they probably didn’t invent the idea, the folks at West Allis Cheese Shoppe have a bin near their checkout that holds what they call “cheese orphans.” These are the ends of blocks or rounds that are packaged and sold in small amounts — usually an ounce or two. Peruse the orphans and take this opportunity to try stuff you’ve never thought to try before. It’s a great way to sample new things or to try something that’s normally beyond your cheese budget. The $7 orphan of 10-year aged cheddar is my best cheese orphan find, but really, you can never go wrong. Grab a box of crackers, a summer sausage and your orphans that makes for a pretty spectacular meal for a football Saturday or Sunday.

6. Spend a day (or three) in cheese country.

In south-central Wisconsin, Green County — and its county seat, Monroe — are the epicenter of Wisconsin cheese, though it’s not a stretch to think this might be the center of all cheesemaking in the US. Sometimes known as the “Gateway to Cheese Country” or the “Cheese Capital of the US,” this area was once home to hundreds of small cheese factories. Though that number has shrunk to the dozens now, there are still plenty of cheesemakers to visit and sample here, including award-winning Emmi Roth.

Monroe is also home to the National Historic Cheesemaking Center, where you can learn about hundreds of years of Wisconsin cheesemaking history and tour a restored cheese factory before heading into town to Baumgartner’s, Wisconsin’s oldest cheese store, where they serve up some of the most unique and delicious cheese sandwiches you can dream, including a Limburger option that comes with a breath mint. Chalet Cheese Cooperative in Monroe is the only cheesemaker in America producing Limburger, and it’s been that way for nearly 50 years. The stinky cheese is one folks either love or hate, but if you want it, they know how to make it.

Green County was where many Swiss immigrants to the Midwest settled, so Swiss cheese is a particular focus here. New Glarus is a true “Little Switzerland” right here in Wisconsin. Home to the Swiss Center of North America, this small town has some of the best Swiss food and culture outside Bern. Get traditional fondue at the Glarner Stube and stock up on local cheeses at Edelweiss Cheese Shop. Though it’s not cheese related, you’ll also want to stop at New Glarus Brewery, an award-winning craft beer spot that only distributes here in the state.

Wisconsin is the only state that requires its cheesemakers to be licensed. It’s also the only state to have a master cheesemaker program. Of 1,200 licensed cheesemakers in Wisconsin, less than 60 are women. But the women who are producing are undeniably impressive. Julie Hook at Hook’s Cheese in Mineral Point is still the only woman ever to win the World Cheese Championship. Marieke Penterman is the woman behind the Marieke Gouda cheese mentioned above that won second and third place in the country at the most recent US Cheese Championships. Katie Fuhrmann of LaClare Farms makes artisan goat milk cheeses, and her Evalon won the 2011 US Cheese Championship Best in Show.

When making cheese, milk is pasteurized until the whey and curd separate. Then, the whey is removed, and the curd is pressed to remove even more moisture and eventually create the wheel or block of cheese you’re used to seeing. But the curd itself is also edible. They’re generally roughly a peanut shape, and they’re a bit springier than most cheese. The moisture and unpressed texture are what squeak against your teeth as you bite into them.

Cheese curds are best eaten within hours of being produced. Unfortunately, the opposite of most cheese, they actually get worse as they age, so they’re frequently only found in places that have cheese production facilities. It makes sense, then, that curds are fairly unique to Wisconsin. Of course, everyone here has their own personal favorite curds, but that usually has to do with the proximity — and therefore freshness — of the curd.

The curds at Ellsworth Cooperative Creamery are so good they’ve been given their own festival. Their special packaging helps keep the curds tasting fresh longer than most, but heading right to the Ellsworth-based factory way out in the west-central part of the state is really the best way to get them. At Wisconsin’s only urban cheesemaker, Clock Shadow Creamery, they start their curd-making sometime before the sun comes up and have them on store shelves before most of us have even woken up. That schedule ensures the freshest, most flavorful and squeakiest curds around.

When cheese is as delicious, plentiful and inexpensive as it is here in Wisconsin, you don’t follow any recipe “guidelines” that suggest a ½ cup of cheese for an entire meal. Instead, when you’re in Wisconsin, take the opportunity to cook with cheese and then go nuts. And since the grocery store brand of cheese is as lovingly made as the rest of the good stuff here and costs less than $2 each, we don’t feel constrained or judged by these recipes. Add some sharp cheddar. Empty the bag of mozzarella. Throw in some Monterey Jack.

Like many of us ignore meager suggestions about one clove of garlic in favor of eight, cheese amounts in recipes are only suggestions as far as Wisconsinites are concerned. We’re the folks that put cheddar cheese (often in the shape of the state of Wisconsin) on top of a slice of apple pie. Need a little more convincing? A 2018 study linked cheese consumption to a longer life, so there’s no reason not to go ahead and eat cheese like a Wisconsinite wherever you are.

Hungry for more? Head to our sister site, Farm Flavor, to learn about Wisconsin cheese on the international stage.