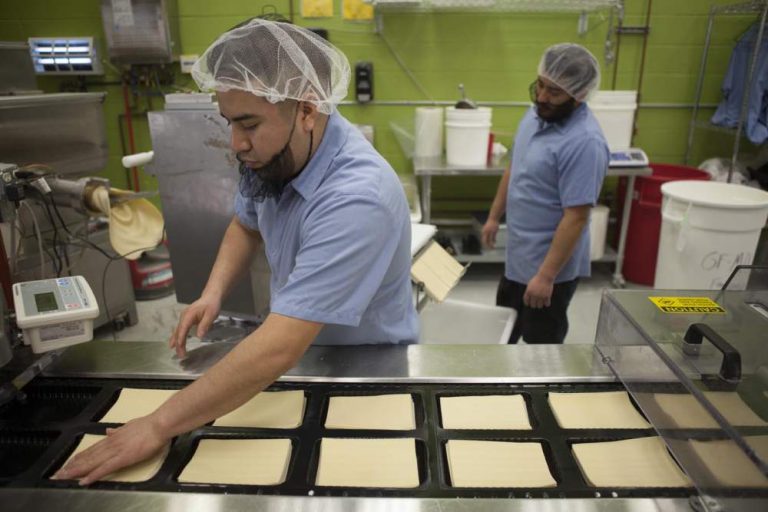 Deep roots in agriculture blended with superior agriscience research and advanced manufacturing capabilities have cultivated a food and beverage production industry in the Madison Region that is a staple of the economy. The region’s food and beverage industry supports more than 60,000 jobs and has gained a global reputation for such key products as milk, cheese, and beer.

The presence of major food production facilities also has created an ecosystem to support the launch and growth of innovative specialty food and beverage manufacturers. The region is a location of choice for a smorgasbord of major food manufacturers including Seneca Foods, Frito-Lay, Kraft/Oscar Meyer, Kerry Ingredients, Monsanto and Del Monte. Colony Brands, the internationally known food catalog retailer, is based in Green County and also has operations in Madison and Janesville. Fromm Family Foods, a pet food maker, has major operations in Columbia County.

RP Pasta of Madison makes fresh rolled and filled pastas, gluten-free pastas, frozen ravioli and frozen entrees and pasta sauce. Its products are sold in grocery chains and served in restaurants across the nation. Peter Robertson, founder and master pasta maker of RP, wanted to replicate the true natural pastas of Italy when he formed his company. The company’s pasta products are made from Midwest ingredients such Wisconsin cheese and vegetables.

“Madison has a great economic diversity,” Robertson says. “The community, including the city government, has supported our growth and helps keep businesses like ours viable.”

Robertson credits his company’s success in part to his involvement in REAP Food Group, a Madison-based organization that connects local producers, consumers, businesses and organizations, and supports sustainable local food efforts in the region.

Wisconsin is famous for crafted beer, and one of the most successful breweries in the state is in the Madison Region. New Glarus Brewing Co. in Green County was founded in 1993 and brews a variety of beers, including the well-known Spotted Cow brand. New Glarus has consistently ranked among the top craft brewers in the nation. Deb Carey, founder and president, says the brewery uses as many Wisconsin ingredients in its beer as possible, including locally grown hops.

“What I love about this region is that we have well-educated consumers who want to know where their food comes from,” Carey says.

The company, which has two brewing locations in New Glarus and employs 90 workers, benefits from a deep skilled labor pool and “great people working with us,” Carey says.

Adrian Reif and Matt D’Armour both had a fascination with food and wanted to create a company that was a source for good. They think they’ve found the right recipe when they created YumButter, a maker of natural nut butter lines including peanut butter and almond butter. Reif and D’Armour have committed some of the proceeds from company sales to help feed starving children in lesser developed countries.

“I came to realize how much of a great food culture we have in the Madison Region,” Reif says. “It’s a great place of opportunity for food entrepreneurs. There is a great amount of food creativity, along with a strong sense of social responsibility.”

YumButter is sold primarily in the midwest, but the company has plans to market it to other parts of the U.S.

Claudia Rayne, owner of Really Granola in Dodgeville, uses primarily Wisconsin products in her mixes. Rayne makes granola that has a definite Wisconsin flavor. Some of her company’s products feature oats and honey grown near Dodgeville. She also uses locally made maple syrup and Wisconsin cranberries in some of her mixes. Her granola is sold in several local grocery stores and served in several cafes and coffee shops.

“The Madison Region is a super supportive community for small batch-businesses,” Rayne says.

Bob Page, owner of Dodgeville-based Bob’s Bitchin’ BBQ Sauce, started selling his sauces and rubs six years ago. Since then, the company has grown to distribution at 22 different retail locations in the region as well as an e-commerce operation. Page also has opened a well-trafficked restaurant in Dodgeville.

“People in this region are very particular when it comes to the food they eat,” Page says. “They want to know where their food comes from and who makes it.”

Like many other budding food companies in the region, Page has his sauce made at Innovation Kitchen, a Dodgeville-based organization that works with growers around the state and food entrepreneurs looking to scale up a recipe into a business.

Wisconsin, of course, is known for its dairy products, and the the Madison Region includes a wealth of dairy farms and cheese making operations. Crave Brothers Farmstead Cheese, operated by four brothers, manages a 3,000-acre dairy farm with 2,700 head of cattle and an adjacent cheese-making facility in Jefferson County that specializes in making mozzarella, mascarpone and farmer’s rope cheese. Crave cheese is sold nationwide. The Crave operation relies a great deal on local feed for their cattle and works with many local businesses and organizations to keep its operation humming. The Crave brothers say they get a great deal of help from the Center for Dairy Research.

“We have a wealth of cheese makers in Wisconsin, and we work together to make a quality product,” says George Crave, Manager of Cheese Factory at Crave Brothers. The farm operation is widely recognized for its renewable energy and sustainable farming efforts. “We support a lot of people, and we get great support from the people of our community,” says Mark Crave, Herd Manager/Personnel Manager at Crave.

Read more about food production in the Madison Region.