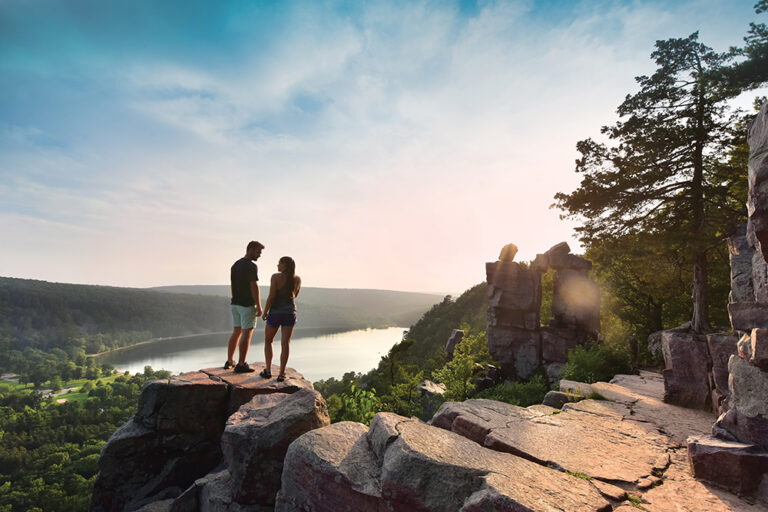 Whether you want to play ball, watch ball or just have a ball, the Madison Region is filled with regular sporting events and athletic competitions that will make you cheer.

It begins with the University of Wisconsin. UW-Madison’s various athletic programs — led by football and basketball, but also wrestling, volleyball, rowing, golf, swimming, ice hockey, tennis and more — combine to draw nearly 2 million people to Madison each year and generate a total economic impact on the state of $757 million.

“It’s a huge community builder and great focal point for people to come together, have fun and celebrate victories,” says Justin Doherty, University of Wisconsin senior associate athletic director. “It’s also a massive economic driver in the state as well.” The Madison Area Sports Commission is building off the Badgers’ base, which has helped bring numerous events to the region, including the CrossFit Games, USA Cycling National Championships, IRONMAN Wisconsin and the WIAA High School State Championships.

And for those who like to get outdoors, the opportunities are plentiful. Adventurous residents can enjoy the action of water sports on Lake Mendota. If you’re looking for something more relaxed, stroll the 16-acre Olbrich Botanical Gardens and 10,000-square-foot conservatory.

Add in the state’s professional sports teams (the Green Bay Packers, Milwaukee Brewers and the 2021 NBA champion Milwaukee Bucks), and the Madison Region has a robust lineup when it comes to athletics.

“Madison is a well-rounded place that draws a variety of people and a variety of events,” says Doherty, who has lived in the region for nearly 30 years. “People like to watch sports, but they also like to take part in them. There’s a really strong participatory component to the community.”

“Wisconsin in general and Madison, in particular, is an outdoorsy area. People enjoy being active,” Doherty says. “There’s just a lot to do here.”

Rarely does a day go by without some significant sporting event in the Madison Region. The various pro teams alone create plenty of spectator time, as fans enjoy watching the games in person, at home or at entertainment venues.

But there also is no shortage of athletic action within Madison, thanks in part to the efforts of the Madison Area Sports Commission, which was formed in 2010 to bring additional sports events to the community. In 2018, the National Association of Sports Commissions named the MASC the Sports Commission of the Year among cities with a population of less than 500,000.

Two of the most significant annual events Madison hosts are the IRONMAN Wisconsin triathlon (with more than 2,500 competitors) and the five-day-long NOBULL CrossFit Games (which has taken place in Madison since 2017). According to the MASC, those two events created a combined economic impact of more than $16 million.

But when it comes to pure passion, it’s hard to top the excitement generated by the Wisconsin Badgers sports teams, from the packed Camp Randall Stadium for football games all the way to the enthusiastic group of students competing in the university’s Esports Club.

“Regardless of your background or any of your views, when everybody puts on their red and white and goes to the game, we’re all together. We’re all cheering on the same group of people and having fun in the venue together. There’s no question that sports initiates a sense of community like few other things can.”