The Cullman area checks all the boxes for young families. 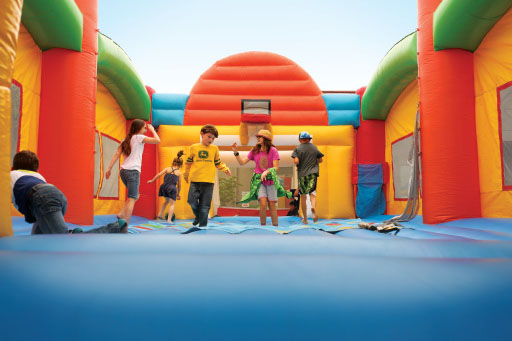 The secret is out:

Cullman is a fun place to live where you can get more for your money and plug into life year-round with community activities and great recreation options, including destinations in the area’s parks system, sports leagues and the beautiful Lewis Smith Lake. Plus, the entertainment options just keep growing with new restaurants and shops opening alongside established favorites.

Joe Ragsdale was raised in Cullman and returned to settle here after living in Destin, Florida, and Las Vegas, Nevada. He says he is enjoying Cullman’s affordability and wouldn’t want to raise his 5-year-old daughter, Evie, anywhere else.

“This is an incredible place to raise children,â€ he says. “We love to go to the parks – Evie loves the new Connected Park within Ingle Park – and Cullman events like 2nd Friday and seasonal activities like the fair and local festivals.”

Cullman’s many recreational facilities and events are popular with visitors and residents alike. 2nd Fridays (June-September) are held downtown on the second Friday of the month with live entertainment, activities by the Festhalle Farmers Market and specials at local restaurants and area boutiques. The new Connected Playground at Ingle Park is one of a few to be built with accessible features that connect children of all ability levels, and downtown’s Sportsman Lake Park features a putt-putt golf course, fitness equipment, paddle boats and a new splash pad.

And if there’s an occasion when you need something that can’t be found in the Cullman area, easy access to Interstate 65 whisks you to bigger cities like Huntsville and Birmingham in less than an hour.

And Then There’s the Lake

People from all around come to Cullman for fishing and other recreational activities on the 21,200-acre Lewis Smith Lake, the deepest lake in Alabama. On its shores, Smith Lake Park offers year-round camping, a fishing pier, a stage for special events and a new six-lane boat launch. In 2019, Lewis Smith Lake was the site of the Major League Fishing Bass Pro Tour Stage Five Tournament, which attracted top professional anglers, including Cullman natives Matt and Jordan Lee.

Ragsdale is co-owner of the Rock N Roll Sushi franchise group, which opened a restaurant in Cullman last year. He says the restaurant concept is something Cullman “has been wanting for a while.”

“I have always believed in Cullman and what it has to offer,â€ Ragsdale says. “I feel like it continues to grow and attract new businesses that enhance the quality of life.”

Goat Island Brewery has also found a niche in Cullman, where it became the first craft brewery to operate in town since the 1800s. It has become a popular nighttime destination for live entertainment, as well. Goat Island offers year-round and seasonal craft beers named after Cullman landmarks. With names like Sipsey River Red and Big Bridge IPA, some of Goat Island’s brews have won gold medals at the Alabama Craft Beer Festival and State Championship.