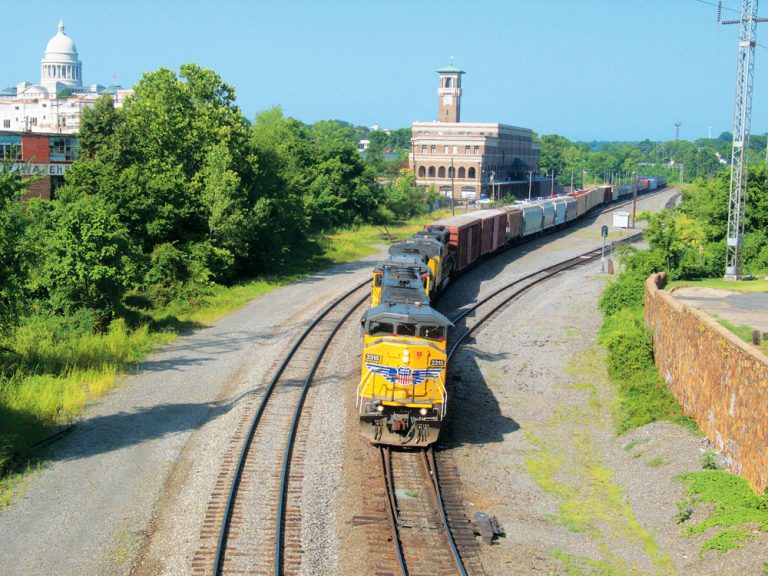 By road, rail, water or air, Central Arkansas can move the goods.

For companies that ship products by truck, access to interstates include I-40, which stretches east to serve major Atlantic Seaboard markets and west to California. I-30 spans from Little Rock to Fort Worth. The region is also served by I-430, I-440, I-530, I-630 and five U.S. and 22 state highways.

“There was no interstate here in 1959, the airport was the small Adams Field, and the landscape was acres and acres of farmland,” says Bryan Day, Little Rock Port Authority executive director. “Today, Little Rock Port Authority has 3,500 acres and 40 business tenants that employ 4,000 people from 17 surrounding counties. Within those 40 companies, five foreign countries are represented.”

Day says the Port of Little Rock is a major economic development engine for Central Arkansas.

“A 2016 economic impact study showed that over the previous 10 years, the port had an economic impact of almost $5 billion,” Day says. “Oddly enough, many people don’t even know that we’re out here doing business. The companies here ship products all over the world, dealing with raw materials like steel, aggregate, fertilizer, aluminum, wire rod, wet cake and other bulk commodities.”

Another advantage of the port is that it houses Foreign Trade Zone 14, an advantage for industries that bring raw materials from other countries and store the materials before turning them into another product, thereby deferring duties and taxes. Also onsite is a 4,500-foot-long slackwater harbor that allows safe loading and unloading of barges if the Arkansas River conditions are not favorable due to weather.

“The port is right off Interstate 440 – turn right and you’ll be in Memphis in two hours, or turn left to be in Dallas in about five hours,” Day says. “Clinton National Airport is right across the interstate, and shipping by barge downstream will have you in New Orleans in five days. We still have in excess of 1,000 acres for industries to build on.”

Another valuable transportation resource in Central Arkansas is the Bill and Hillary Clinton National Airport, which serves about 2 million passengers a year and offers 70 daily flights.

The state of Arkansas estimates that Clinton National Airport provides a $1.2 billion annual economic impact in Central Arkansas, says Shane Carter, airport director of public affairs and government relations. More than 3,500 employees work on the airport’s 2,100 acres, and $90 million in improvements to the terminal facilities have taken place over the past 10 years.

Carter says the traffic at Clinton National is about 70 percent leisure passengers and 30 percent business travelers.

The airport added carrier ViaAir in 2018 to go along with existing airlines American, Delta, Southwest, United, Allegiant and Frontier. In 2018, a $2 million runway lighting project was completed, and airfield improvements over the years have totaled nearly $120 million.

Carter adds that the Little Rock Municipal Airport Commission is currently finishing a new 20-year master development plan to identify future demand and how to effectively meet the anticipated needs of airport customers.

“We have the mindset of always looking ahead,” he says. “This includes making sure future property needs are handled, our tenants are happy with everything they need to have successful operations, and the airport continues to provide a strong economic impact to benefit all of Central Arkansas.”