Skip to content
Home > AZ > Education, Careers & Opportunity > How an Arizona Mining Town Reinvented Itself as an Arts Community

Faced with a closed mine, collapsed economy and shrinking population, Ajo, Arizona, embraced creativity — and saved itself. 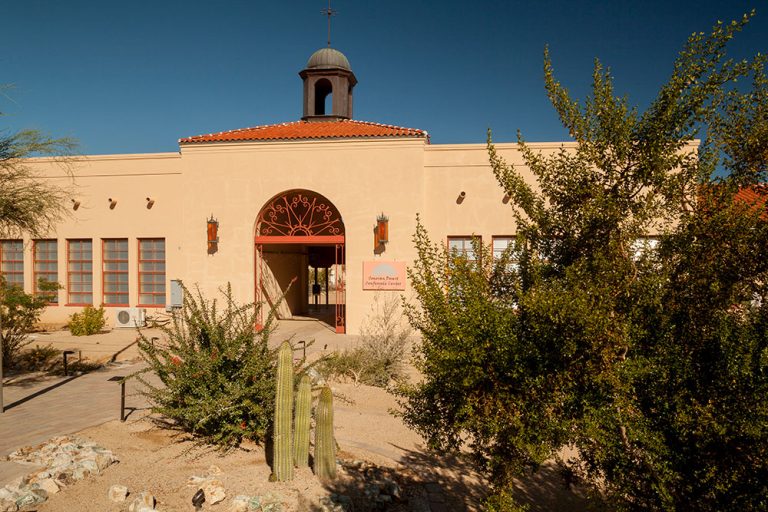 In an alley in southwestern Arizona, less than 40 miles from the border with Mexico, murals tell stories of community pride, nations divided and the humbling beauty of the Sonoran Desert. Tucked into 12 million acres of wilderness, the tiny town of Ajo is the kind of place that locals affectionately refer to as the somewhere in the middle of nowhere.

Home to Arizona’s first open pit copper mine, Ajo built its economy and identity on mineral extraction. Never incorporated as a city, the community depended on the mine for housing and infrastructure as well as employment.

Jose Castillo, 78, grew up in Ajo, the son and grandson of miners. As a kid, the surrounding desert was his second home. He and his friends would walk for miles or hold cookouts among the cholla. Even as a teen, he appreciated the enchanting warmth of his hometown. “I remember being in high school, and people wanted to go to Disneyland. People would say it was magical. I would say, ‘I have that every year at Ajo’s Christmas festival.’â€

Eventually, Castillo, too, worked in the mine. It’s just what people did.

In 1985, years of labor dispute led to the final closure of Ajo’s copper mine. Castillo, by that time a husband and father of three, was able to find work locally to support his family, but many residents had to leave. The town’s population plummeted from almost 8,000 to roughly 3,000, and its identity dissolved.

For years after the mine closed, Ajo served primarily as a gateway to Organ Pipe Cactus National Monument and Rocky Point, Mexico, but recently something has shifted. Decades after the end of extraction, residents are reimagining the town in a way that celebrates its creativity and honors its small town roots. And unlike so many small towns across the country that are facing extinction, new residents are moving here.

Ajo’s charms – welcoming locals and miles of untouched desert – lure adventurous, creative souls who want to be part of something bigger than themselves. These new residents ogle the Christmas Eve parade and dance Ballet Folklorico alongside multi-generational Ajoites, and they have injected fresh energy into the community.

In 1993, the International Sonoran Desert Alliance (ISDA) launched to preserve the surrounding desert and celebrate the region’s multi-cultural heritage. In 2007, under the guidance of then-Executive Director Tracy Taft, the non-profit restored the historic Curley School and converted it into affordable housing for artists, from potters to paper makers. One of the first resident artists, Morgana Wallace Cooper, taught for ISDA’s art-based GED program, led the town’s first community arts program, and now runs the only movement studio in town.

But, Ajo’s artistic streak isn’t just for residents. Stuart Siegal, who co-manages the Sonoran Desert Inn & Conference Center hopes it will give tourists a window into the community and an excuse to stay for a spell.

If you’re looking for art in Ajo, options abound. Late last year, the Curley School opened a shop selling pieces made by its residents. At the Ajo Plaza, every other year local and out-of-town artists get together to paint murals, in and around Artists’ Alley for Ajo Arts Weekend. Three galleries in the main plaza sell work by locals: Art Under the Arches, Ajo Copper News, and A Space in Time. For those willing to explore a bit, The Sonoran Desert Inn provides a brochure highlighting some of the public art on display throughout town, and artists regularly host pop-up shows in outdoor living rooms, so keep your eyes peeled for signs.

The desolate beauty of Ajo’s surroundings inspire creativity, and resources like the Curley School’s woodshop and ceramic studio support the act of making. “Ajo is a great place to live, have inspiration, reduce your living costs, and work on art,â€ says Siegal.

However, Siegal points out that the town’s isolation also limits artists’ local selling options, forcing resident makers to pursue online sales. “If you’re interested in selling art, you have to have a multi-faceted approach, selling in town but also online or elsewhere. We’ve had a recent push for e-commerce lately. There’s sales there waiting to be made.”

Despite these challenges, Ajo’s tight knit sense of community – a holdover quality from its mining days – are the very things pushing its new vision toward reality.

“I was creating a project and needed to build movable walls,â€ says Cooper. “I had people willing and able to volunteer to teach me how to do it. It’s incredible the human resources that are available. You can’t necessarily live off the sales of your work just living in our little town, but there are so many opportunities for wealth in other areas.”