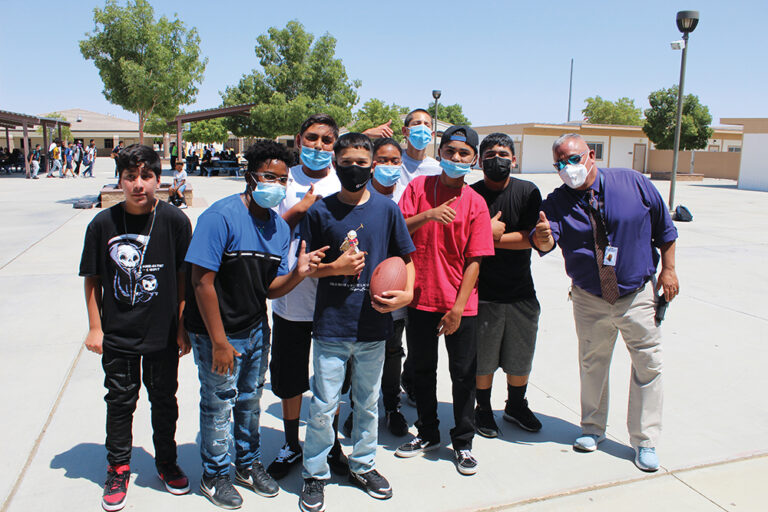 The Adelanto Elementary School District has lofty goals for its students and staff. However, the school district’s comprehensive plan to transform it into one of excellence was anything but conventional. And there were some tough obstacles to overcome.

Beyond the high student suspension rates, low academic performance and poor attendance, the district began to re-evaluate its approach in July 2020, when the pandemic was forcing educators and school administrators to rethink everything.

They hit the ground running and came up with a brand-new perspective on what standards of excellence look, sound and feel like.

“Standardized test scores, grades, attendance and discipline data are a myopic way of evaluating the potential of a school,” explains Interim Superintendent Michael Krause. “By focusing on these trailing indicators, educators and administrators may inadvertently set their schools up for failure.”

Instead, the district started by surveying staff, students and parents on how they felt about the 14 elementary schools in the Adelanto district. Direct feedback would enable the district to have a clear picture of their successes and failures to prioritize what was working and deemphasize what wasn’t.

As a result of the findings, the staff began to concentrate on community involvement, ongoing professional development and collaboration to shift the culture within schools.

Elected officials, police, firefighters, clergy and mayors worked together to establish a presence within local communities.

Teachers were encouraged to involve and engage with families to create a more robust network of student support and collectively celebrate their successes.

Add to that a belief that a strong sense of personal accountability is the foundation for effective professional development, and you have a recipe for success.

“When teachers consistently reflect on their behavior and remain open to and invested in improving their skills, knowledge and capacity, the sky’s the limit on what can be accomplished in the classroom,” Krause adds.

To empower teachers to strive for excellence, Adelanto administrators nurture a culture of continuous improvement through comprehensive coaching, professional development, mentorship and feedback for all staff members.

Collaboration is also a central tenet of the district’s philosophy. Instructional practices are their best when teachers view their classrooms as part of the greater good versus in isolation.

Twice a month, principals converge on a different school within the district to explore classrooms and curate best practices. These standards of excellence are shared districtwide and serve as inspiration to drive better outcomes over the long term.

“Replicating excellent ideas raises the caliber of teaching and has the greatest potential to make the Adelanto Elementary School District shine,” Krause concludes.

The idea was to cultivate a warm, welcoming and safe school environment that would profoundly impact students’ and families’ commitment to education.