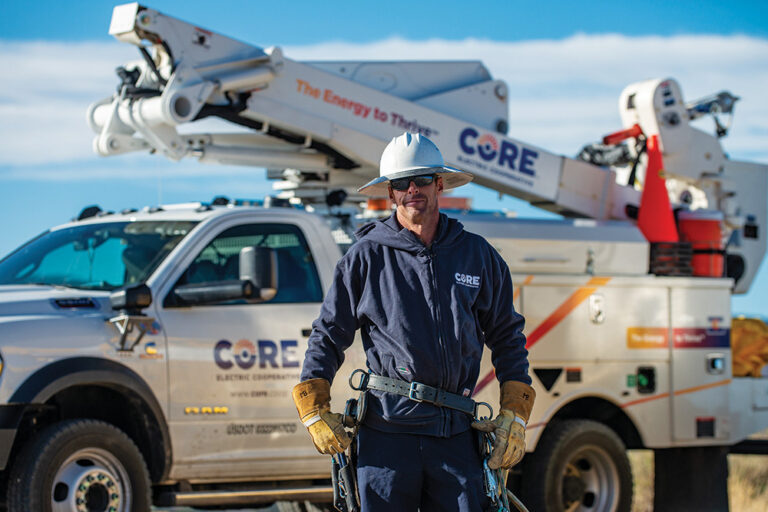 They are served by CORE Electric Cooperative, a unique alternative to municipal and investor-owned private utilities, which has 170,000 members in a 5,000-square-mile region.

“We don’t operate to make a profit. We operate to provide the most cost-effective, reliable service to our members,” says CORE CEO Jeff Baudier. “We’re also not regulated, so that allows us maximum flexibility to tailor an electricity solution to a potential new business.

“For example, if we want to incentivize a particular large business to come to Adams County, we can either provide them a specially tailored electricity rate that would be less burdensome in the front years or it could be tailored so that the more electricity they use, the cheaper the rate becomes,” he explains. “Or we could even participate as an investment partner to help them get incentives or funding to get the business started in the first place.”

Formed in 1938 by a group of residents in a sparsely populated area where big utilities wouldn’t venture, CORE is now the largest electric distribution cooperative in Colorado and one of the largest in the United States.

Unlike for-profit utilities, CORE returns a portion of its profits to members in the form of capital credits. In the past decade, CORE has returned nearly $120 million in capital credits.

CORE is also “the most reliable electric utility in Colorado,” says Baudier, thanks to preventive maintenance, from meter replacement to regular line inspections. The frequency and duration of power outages are less than half that of most other Colorado utilities.

We see Adams County as the next frontier of growth in Colorado. So, it’s very important to us that potential new businesses see CORE not as just the electric supplier, but as a key partner helping those businesses get their feet under them.

CORE’s newest office, which opened in early 2021 and features charging stations for electric vehicles, is conveniently located near the Interstate 70 corridor in fast-growing Adams County. So are two operating solar facilities and a third under construction.

“It’s clean energy that our consumers want, and it’s cheaper than the traditional fossil fuel-type power sources,” says Robert Kiess, district manager of the Bennett office. “We’ve got 8,000-plus members out here and when the sun’s shining, we’re running completely off solar. It makes us more independent than other power producers, so it gives us more control over our pricing, and that is better for our consumers.”

What’s more, Kiess adds: “A lot of businesses are very conscious of their carbon footprint. It’s attractive for them to go where they can get a good percentage of their power from renewable resources.”

“If you’re at work and your power goes out, we already know,” Kiess says. “And we may already have it back on before you get home without ever having to notify us.”

Colorado’s growth and the economic effects of the COVID-19 pandemic have highlighted the critical importance of enhancing economic development. For many businesses, energy is a top consideration in where they… END_OF_DOCUMENT_TOKEN_TO_BE_REPLACED