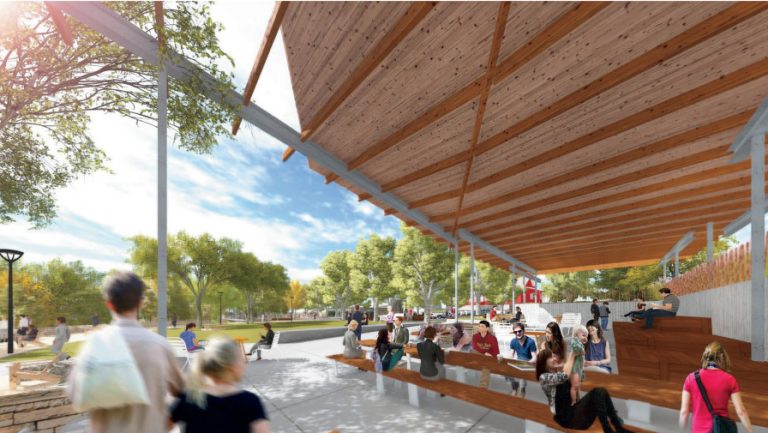 Castle Rock / Courtesy of the Town of Castle Rock

Once a bedroom community of fewer than 10,000 people, Castle Rock has grown into a vibrant city of more than 63,000 residents – and growing fast. In fact, the U.S. Census ranks Castle Rock as the 10th-fastest growing community in America. The town is actively preparing for the population growth by green lighting projects that will add to the housing mix, spur job growth in the high-paying tech sector and strengthen the community’s quality-of-life amenities.

Downtown on the Upswing

One of the best examples of the town’s commitment to smart growth is the $60 million mixed-use Riverwalk project, which when completed will include 10,000 square feet of retail space, 21,000 square feet of commercial office space, 228 luxury apartment units and a 328-space parking garage right in the middle of downtown. Golden, CO-based Confluence Companies broke ground on the property in early 2017. Developers and local officials expect the Riverwalk will attract young professionals looking for an urban setting where residents can live, work and play.

“We definitely need more housing options for the young professional. The millennial or young professional demographic is very similar to an empty nester demographic. They both want to be in a walkable area and have access to great places to dine, and our historic downtown provides all of those things,â€ says Kevin Tilson, Director, Castle Rock Downtown Alliance. “We’ve heard it for years that people would love to live in downtown Castle Rock, and we really didn’t have a lot of options available. The Riverwalk is going to cater to a number of different demographics of people that want to live in this cool and hip space.”

“For residents and office tenants of Riverwalk, they’ll have access to great amenities including a resort style swimming pool and expansive clubhouse facility,â€ says Anthony DeSimone, Principal, Confluence Companies LLC. “Residents will have access to a cyber cafe, club room, health club quality fitness center, enclosed bike storage, bike maintenance area, dog wash room and easy access to the community trail system that runs through the property and along Sellars Gulch and Plum Creek. With immediate adjacency to the town’s investment of Festival Park, residents can enjoy all of the new outdoor amenities across the street in downtown Castle Rock.”

A Home for High-Tech

“The Move Building downtown is filled with locally grown startup companies that needed a hip and modern space to run their business and recruit the top talent,â€ Tilson says. “Their presence in downtown, along with the Mercantile Commons and Riverwalk mixed use projects, will surely help drive a stronger downtown economy, which will benefit anyone that is looking to shop local and get their goods and services in an historic and authentic downtown environment.”

The town’s growth stretches beyond downtown. For example, the $177 million Promenade at Castle Rock retail, dining and entertainment complex continues to bring new shopping and dining choices to residents, and the 320-acre Philip S. Miller Park is the town’s largest park project and has been a major priority for the local officials. The park and adjoining Miller Activity Center feature a 2.5-acre playground, a zip line, an amphitheater, climbing wall and video-simulated golf course. Tilson says the addition of these amenities has also helped with economic development efforts.

“Without a doubt, Castle Rock has become a regional draw for dining, shopping and enjoying our active and unique parks and trails system,â€ Tilson says. “Philip S. Miller Park is tremendous asset for the community. Obviously, it is a major attraction for residents and visitors, but it is also a huge attraction for employers. We are seeing more and more primary employers base their location decisions, in part, on the amenities that would be available in the community for their employees. This park checks that box in major way for our community.”

We continually get put on the lists of the best places to live in the nation, and I think our secret is out that people want to live here, and businesses want to be here.