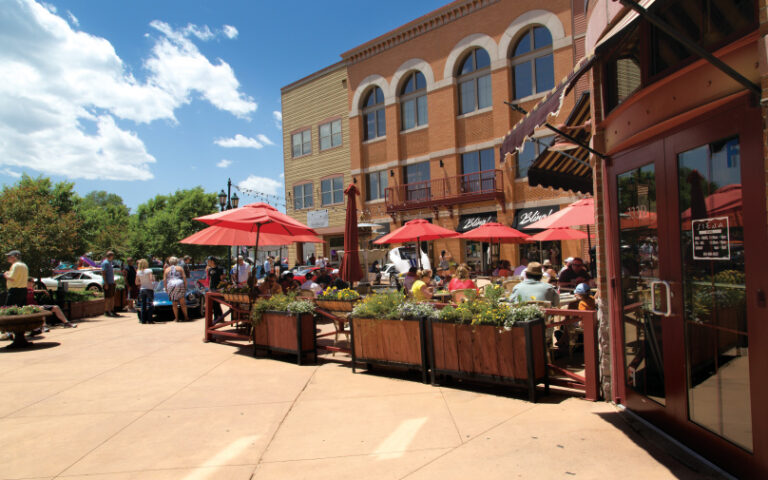 Redevelopment in downtown Castle Rock is bringing renewed excitement to the district, with plans that include a $5 million expansion and enhancement of a popular Festival Park, and the 2016 opening of The Move contemporary office building that will ultimately house high-tech companies and an estimated 200 total employees.

“Those well-paid tech employees at The Move will need places to eat, shop and enjoy a cocktail after work, and that will bring even more exciting plans to the future vision of the district,” says Kevin Tilson, director of Castle Rock Downtown Alliance.

Also new is the opening of an eclectic Acme Water Tower Center building that now houses Castle Rock Beer Co. and Tamarind Indian Cuisine, while a spacious Mirage Dental Building is being constructed on an empty lot near Safeway grocery store and will open in 2017.

Tilson points out that downtown Castle Rock has also installed aesthetic lighting over a busy Wilcox and Third streets intersection, and many new public events have debuted throughout the district. A Classic Rock Cruisers Car Show & Concert takes place in June and has won a Governor’s Award for Excellence, and a “Rink at the Rock” outdoor skating rink has become a well-liked annual wintertime attraction.

Other events include a huge Oktoberfest celebration, Trick or Treat Street Halloween afternoon, Colorado Artfest and Rock After Dark Musicfest, and four Starlight outdoor movies staged in Festival Park. Past Starlight showings include The Boxtrolls, Goosebumps and Captain America: The Winter Soldier.

“Speaking of Festival Park, major upcoming upgrades there will include an interactive water feature, an elevated boardwalk and access to a nearby Sellers Gulch Creek,” Tilson says. “Those enhancements will add even more to the aesthetics of downtown.”

One of many people especially enjoying the energy of downtown Castle Rock nowadays is Michaela Bacon, owner of Maddie’s Biergarten, a gathering-place pub where all draft beers are microbrews produced in Colorado. Maddie’s also features live music on Friday and Saturday nights.

“I am impressed with the increase of job activity and the overall buzz occurring in downtown Castle Rock these days,” Bacon says. “Besides running Maddie’s, I’m looking to personally move downtown to have my residence there, too.”

Also experiencing success in the district are restaurants like Union and retailers like The Barn and The Emporium. Nick Lucey, owner of NickLucey.com, which specializes in fine art photography and graphic design, echoes the same positive attitude about downtown Castle Rock and its creative vibe.

“I am pro-development and am glad to see all the construction and progress occurring,” Lucey says. “Besides working downtown, I also live in the district in the historic Craig & Gould neighborhood. It’s great.”

Castle Rock is a retail mecca with its well-established Outlets of Castle Rock. Also developing in 2016 north of the Outlets is Promenade at Castle Rock, a grand mall construction project with many brand name retailers. Tilson addresses the topic of whether Promenade is being perceived as a competitor to downtown retail development.

“They are two very different amenities for the community. Our malls bring assets that residents really need and want, while the downtown is also adding attractions that will contribute to our quality of life,” he says. “Both are good for Castle Rock. It’s like the saying, ‘A rising tide raises all boats.’ The success of both together will be good for the entire town.”

I am impressed with the increase of job activity and the overall buzz occurring in downtown Castle Rock these days. Besides running Maddie’s, I’m looking to personally move downtown to have my residence there, too.