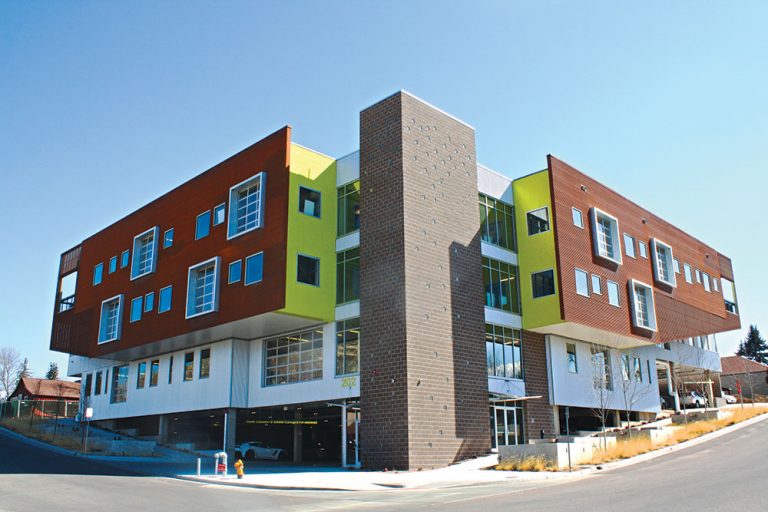 Downtown Castle Rock has always been abuzz with activity as a center of commerce, shopping, tourism and colorful community festivals for which the town has long been known. Redevelopment and construction have been transforming the district dramatically in recent years, yet what has not changed is how the district reflects and celebrates the special camaraderie of its residents.

“The downtown area was becoming a bustling urban center prior to the coronavirus outbreak, and I look forward to the entire district becoming just as active again,â€ says Pam Ridler, president/CEO of the Castle Rock Chamber of Commerce. “Castle Rock is a beautiful community, and that certainly includes everything that our downtown has to offer.”

One of the highlights of the downtown area is Festival Park, a once underutilized space that is now a centerpiece attraction. The park received a $6.9 million makeover during 2017-2018 to become a destination for community events, fun and relaxation. Its amenities include an amphitheater, splash pad, market plaza, fire pits, pedestrian walkway and a bridge over a creek.

“Festival Park has become a phenomenal attraction, and we’ve even moved our chamber’s annual Colorado Artfest at Castle Rock to the site,â€ Ridler says. “We’ve hosted Artfest for 32 years and know that the refurbished park is the place to have it from now on. It has become a perfect gathering place in the core of downtown.”

Festival Park is also near a new development called Riverwalk Castle Rock, a multifamily, commercial and retail center along Wilcox Street that adds even more energy to downtown. The $64 million Riverwalk project was developed by Tony DeSimone, an executive with Confluence Companies. DeSimone is also a former U.S. Army Corps of Engineers officer and current resident of Castle Rock who wanted to create an eye-pleasing walkable district that would be dynamic seven days a week, where people can live, work and dine all in the same place.

That same vision of livability is going into another DeSimone downtown development called Encore, which is currently under construction across the street from Riverwalk. Encore will be a seven-story building that will feature 120 condominiums, along with a few retail shops on the first floor.

Mercantile and the Move

Also helping transform the downtown have been a couple of relatively new developments that have been open for a few years, Mercantile Commons and The Move.

“Millennials and young professionals are looking to move into apartments, lofts and condos in the downtown area to be where the action is, with stores, restaurants, bars and entertainment venues popping up to serve those incoming populations,â€ Ridler says. “Such is the case in Castle Rock.”

Mercantile Commons is an apartment complex with an entire second floor dedicated to commercial office space, and that building opened with every office space fully leased. In addition, there are currently no vacancies for any studios, one-bedroom or two-bedroom apartments within the attractive four-story building.

The Move is a four-story commercial building developed by White Construction Group with a specific goal to attract small startup companies. Some of these businesses were actually thinking about leaving Castle Rock due to the lack of office space downtown, and The Move provides them with a great location where they can continue to work and grow.

The Move was constructed with an open industrial dÃ©cor look and features LED lighting that can change colors for the holidays and special occasions. It also has 270 solar panels on the roof, and the office windows provide great views of Castle Rock and the Rocky Mountains.

As for local government, also headquartered downtown is Castle Rock Town Hall, and for safety’s sake, the Castle Rock Police Department is right across the street from Festival Park.