Three breweries are thriving, and more are on tap 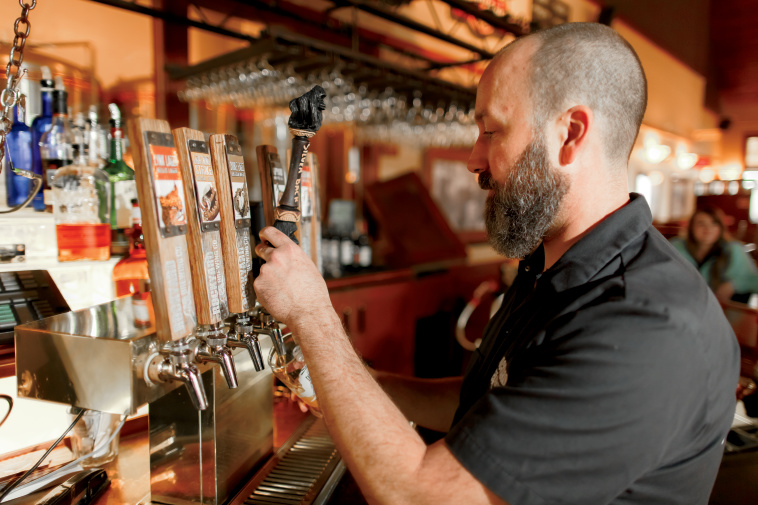 Here’s a toast to Colorado’s craft beer industry, whose economic impact to the state is more than $1.7 billion annually, according to a September 2016 report by the University of Colorado’s Leeds School of Business.

There are now in excess of 350 breweries in The Centennial State, and that includes three in Castle Rock. Those three operations are Rockyard Brewing Company, 105 West Brewing Company and Castle Rock Beer Company.

“I’ve heard that a few more local microbreweries are in the pipeline,” says Jeff Drabing, managing owner of Rockyard Brewing Company. “It seems like the more breweries that open, the more business everyone gets.”

Rockyard Brewing has been in Castle Rock for 18 years, enjoying a good location on the north side of Castle Rock across the street from five hotels.

“We are also the only brewpub in town, which means we are licensed to cook and serve food on site. Typical breweries cannot,” Drabing says. “Rockyard is a full-service restaurant and bar and has won more than 100 awards in our history. We also package and distribute our beer in stores along the Front Range of Colorado.”

“There are 85 employees here, including 40 full-timers, and we’ve built a good local clientele over the years,” Drabing says. “I enjoy doing business in Castle Rock.”

Also enjoying success is 105 West Brewing Company, which is located northwest of downtown Castle Rock and opened in late 2015. Principal owner and brewmaster Eric Seufert thought that since the population of Castle Rock is more than 60,000 residents, it was time for another brewery to open.

“I did research and started putting the concept together, then hand-picked some investors and opened Nov. 8, 2015,” Seufert says. “Things have been great so far. Castle Rock is turning into a pretty good craft beer town.”

“Our best seller is called Hopped and Loaded, made with Australian hops and featuring a pineapple and citrus taste,” Seufert says. “As for food, we aren’t licensed to make food, but we have a food truck parked out front every afternoon and evening. People can buy food and bring it into the brewery to enjoy with their beers.”

The latest craft brewery to open in Castle Rock is Castle Rock Beer Company, which debuted downtown in January 2016 and primarily serves English, Irish and Scottish styles of beer.

“We focus on malt beers instead of the traditional hoppy beers that are found at most microbreweries,” says Mark Quinnell, general manager of Castle Rock Beer Company. “Malt beers are easy to drink and have lower alcohol levels, allowing patrons to enjoy the taste and experience of microbrews in a comfortable setting – instead of just getting smashed.”

Quinnell says the lower alcohol content of malt beers allow his customers to enjoy 5-6 beers over a couple of hours of, for example, watching a Broncos football game, Nuggets basketball game or Avalanche hockey game.

“Our brewery mimics the atmosphere of establishments in Great Britain, where people drink with friends and family members to enjoy an outing,” he says. “We don’t have a food license but have many restaurants and cafes around us, so people can get food nearby and bring it in. Then they can enjoy some of our top sellers like Dry English Wit, Cream Ale and Red Irish Hart.”