Skip to content
Home > CO > Castle Rock > Love Where You Live > All for One: Castle Rock, CO Residents Are All in This Together

All for One: Castle Rock, CO Residents Are All in This Together

Castle Rock residents are resourceful, collaborative and all about giving back. 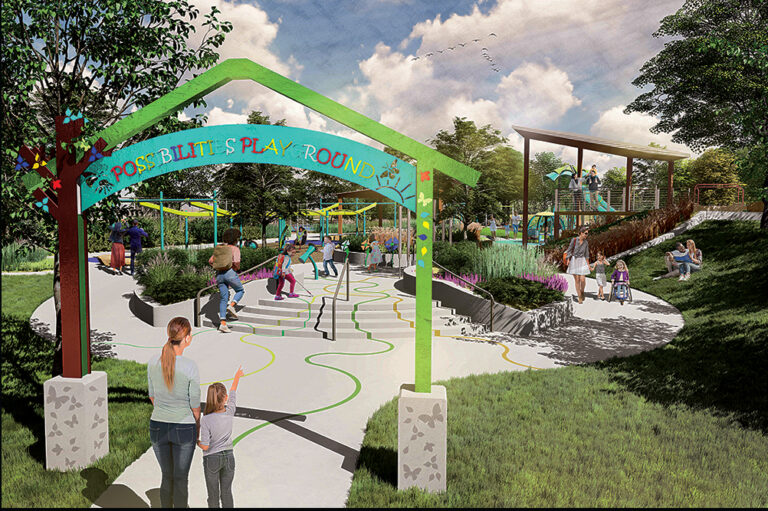 Castle Rock is a community that’s constantly giving back to its residents.

“We raise money, and our mission is to enhance the outdoor spaces in Castle Rock,” says Marne Hansen, executive director of the Castle Rock Parks and Trails Foundation. “We believe one of the most special things about Castle Rock is that we have such a beautiful landscape and so many trails and parks throughout town.”

The town’s master plan calls for a park within one walking mile from every household in the area, a goal it is close to achieving. The numerous parks would be a welcome addition to an already plentiful natural playground.

“We have this really cool outdoor landscape that’s bluffs and hills and pine forests, so we have a lot of mountain biking and hiking trails,” Hansen says.

And, speaking of playgrounds, also on the project list is the highly anticipated Possibilities Playground.

Butterfield Crossing Park is currently undergoing renovations by the town to upgrade the park to be fully Americans with Disabilities Act compliant.

“We have an opportunity to bring an inclusive park to town, so we’re helping the Castle Rock Parks Department defray the costs as much as we can,” Hansen says. “There will be tons of sensory-rich amenities and features that folks in wheelchairs, those not, siblings, friends can all play in one spot together. It’ll be inclusive so that everyone can play there.”

Hansen says the project is expected to be complete in April 2023.

Similarly, fundraising and philanthropic efforts in the community extend far beyond parks and outdoor recreation.

Hilleary Everist, founder and spokesperson for the Aloha Fund, began the fund after the charitable trust her late brother had left called the Aloha Trust (named after his love of Hawaii) had ended. Everist had been the trust’s executor. Throughout her executorship, Everist donated money every year to nonprofit organizations.

“As soon as that ended, I was having so much fun supporting nonprofits in Castle Rock that I started the Aloha Fund, continuing my brother’s intent,” Everist says. “It’s a fun thing to do, and it supports my community. I look for nonprofit organizations that will help improve the activities and opportunities for Castle Rock residents to increase the quality of life here.”

“We raise money, and our mission is to enhance the outdoor spaces in Castle Rock.”

Everist has lived in Castle Rock for over 20 years, using the Aloha Fund to make donations for that entire period.

She recently hit a milestone of donating $1 million, an impressive accomplishment for a one-person effort.

“I want to support as many nonprofits as possible,” she says, naming a few local organizations she enjoys donating to most, including the Castle Rock Library, Castle Rock Chamber Foundation, Castle Rock Hospital and the Colorado Agricultural Leadership Foundation (CALF).

The Chamber Foundation, in particular, she says, is doing work to increase workforce opportunities for Castle Rock residents since many commute out of town for jobs.

“Leadership Douglas County is a program I support through the Chamber Foundation, which develops leaders in Douglas County to hopefully stay here and take leadership positions,” Everist says, noting the needs of the community due to recent growth. “We have grown tremendously in 20 years, and I want to support as many areas as I can.”