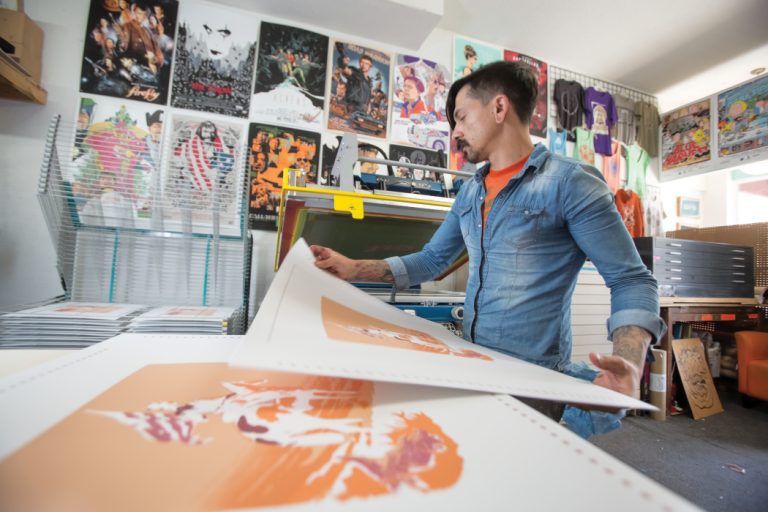 Pueblo Economic Development Corporation (PEDCO) and the City of Pueblo granted $25,000 to LastLeaf Printing, which produces silk-screen art posters for big-name concert and movie industry clients like Bruce Springsteen and Marvel Comics, and $37,500 to Formulary 55, a luxury bath and body products company whose items are sold in the Seattle Space Needle and more than 600 retail stores in 17 countries.

“The half-cent tax-assistance program started in 1984 and has been renewed several times by a vote of the people, which shows Pueblo’s commitment in trying to provide higher-paying jobs and further our economic development,â€ says Jeff Shaw, PEDCO president and CEO.

The current half-cent sales tax fund is about $40 million and traditionally has been used to help attract major employers to Pueblo and expand existing big companies and their suppliers. However, Shaw says PEDCO recently decided to implement a pilot Micro Program to also assist very small businesses.

“Microcompanies are categorized as having 10 employees or fewer,â€ he says. “Traditionally, PEDCO looks for projects larger in scope involving companies with hundreds and even thousands of employees. However, it’s a lot easier for us to help maybe 10-15 microcompanies to expand and add three to five employees apiece than it is for PEDCO to attract a new company with 100 employees.”

For a micro-company to receive a grant, PEDCO ultimately recommends the company to the Pueblo City Council, which makes the final decision after studying the small company’s business plan and financial situation.

“Any interested company can contact PEDCO and will be guided through a user-friendly process that culminates with completing a one-page form,â€ Shaw says. “If approved for a grant, the small-business owner can use the money to buy land, make construction additions, make building renovations or purchase equipment. The money is free if the company promises to create a certain amount of jobs and retain those jobs over a specific amount of years.”

In the case of LastLeaf Printing, the company received $25,000 from PEDCO through the half-cent sales tax fund, with all of the money going toward the purchase of more silk-screening equipment. LastLeaf also received a $25,000 loan from Pueblo County, which was separate from the city’s grant.

“LastLeaf won’t need to pay back the City of Pueblo grant if their company adds three full-time employees by the year 2019,â€ Shaw says. “Then they must at least maintain that employee level until 2025 or face monetary penalties. The bottom line is that LastLeaf’s deal with the city will be satisfied after 10 years, at which time the $25,000 is forgotten.”

Formulary 55 was founded in Seattle in 2012, but wanted to grow in a pro-business community with a lower cost of living and good quality of life. After much research, owners Anthony and Cordelia Hill chose Pueblo.

“We moved to Pueblo in 2014 and grew our wholesale business by 80 percent in 2015 and 50 percent in 2016,â€ says Anthony Hill. “Today, about 85 percent of our handmade soap and skin care products is shipped to retailers around the world, while 15 percent of our sales occurs from our website. Everything we do originates from Pueblo – we love it here.”

As part of the half-cent tax-assistance agreement, Formulary 55 has guaranteed to hire three full-time employees by 2019 to bring its workforce to nine. Those three new full-time employee positions must remain on the payroll until 2025.

“The Micro Program creates jobs in our community, adds more revenue to Pueblo, and lessens the work pressure on small business owners who receive these grants,â€ Shaw says. “We want as many micro-companies as possible to get involved, so contact our PEDCO offices at 719-544-2000 for more information.”