Getting to know neighbors just got more fun 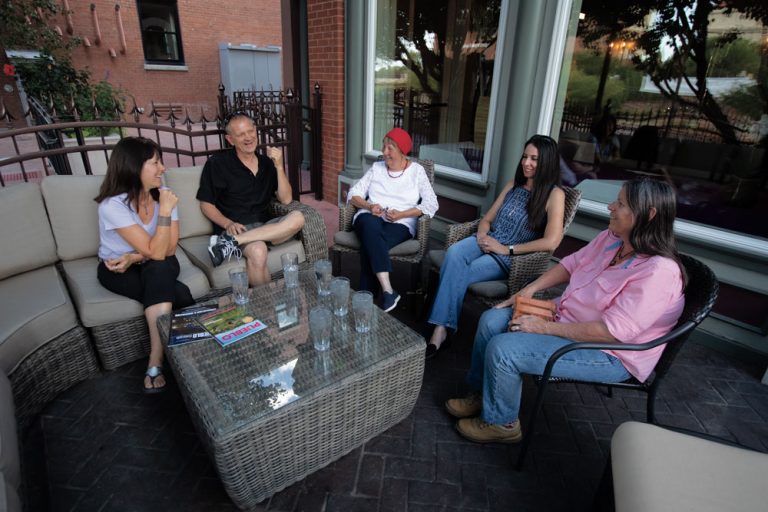 For newcomers, exploring Pueblo and meeting its newest transplants has never been easier – or more fun. Moving to a new community can be challenging and overwhelming, but here, there’s a group helping ease the transition from nervous newcomer to plugged-in resident.

The Pueblo New in Town Meetup began in August 2017 on meetup.com, a website that helps facilitate in-person connections, but it wasn’t until September – when Linda Lutz moved to Pueblo and found the group – that it started hosting events. Lutz has been the group’s lead organizer ever since, and with her at the helm, it’s helping bring together new residents and longtime locals alike.

“Many people are looking for a sense of community and connectedness,â€ says Lutz, who also serves as the travel and tour sales coordinator for the Greater Pueblo Chamber of Commerce. “It’s important to be engaged in your community, and I think our group is perfect for people looking for ways to get involved and make new friends. We’ve also helped each other navigate the challenges that come up when moving to a new place, like finding jobs, and that’s been wonderful.â€

Now comprising nearly 300 members, the Pueblo New in Town Meetup group typically gets together once or twice a month, and attendees can expect anything from drinks and dinner to dancing, museum tours and concerts.

Lutz, who moved to Pueblo from the midwestern U.S. with her husband, says she does her best to organize events that enable participants to get to know one another as well as the city. For example, they’ve been to local hotspots like Brues Alehouse Brewing Co., Gus’ Place and the Steelworks Museum, and they’ve joined with other groups to take part in activities like tubing on the Arkansas River.

Although many members are between the ages of 40 and 60, Lutz says individuals of all ages are welcome, and she emphasizes that the group’s proverbial door is always open.

“This is an inclusive, friendly group, and we’re happy to have anyone who wants to join,â€ Lutz says. “I see it as an opportunity for people to get out of their comfort zones, come together and get to know one another. We’re a diverse bunch; we have a lot of retirees who’ve recently moved here to enjoy this stage of their lives, but we also have several younger members who have lived here a long time and decided to get involved after seeing how much fun we have.â€

Retiree Patricia Swatek has been a member of the Pueblo New in Town Meetup group since the fall of 2017, shortly after she moved to the area from Missouri. In addition to enjoying the group’s events, she says she’s been happy to have a network of people to consult when it comes to finding resources in the community.

“There are a wide variety of activities for us to choose from, and there really is something for everyone,â€ Swatek says. “It’s also been nice to pass information back and forth – things like who’s the best local plumber and how to get to nearby destinations – and largely because of this group, I’ve never felt alone in Pueblo. I truly feel like I’m part of the community.â€

Another newcomer who has joined the group is Theresa Fraboni, a retiree who relocated to Pueblo from New Jersey with her husband in October 2017. She discovered the group after searching for a local club with which to get involved, and after receiving a warm welcome at her first event, she says she knew it was a perfect fit for her.

“I felt lonely when I first moved here, but thankfully, the Pueblo New in Town Meetup group really changed things for me,â€ Fraboni says. “You might not think having a dinner with strangers would be important; for me, it was exactly what I needed. The members are fun, interesting and positive people, and I remember how great I felt after I left my first event. I knew I could be happy here, and I am.â€