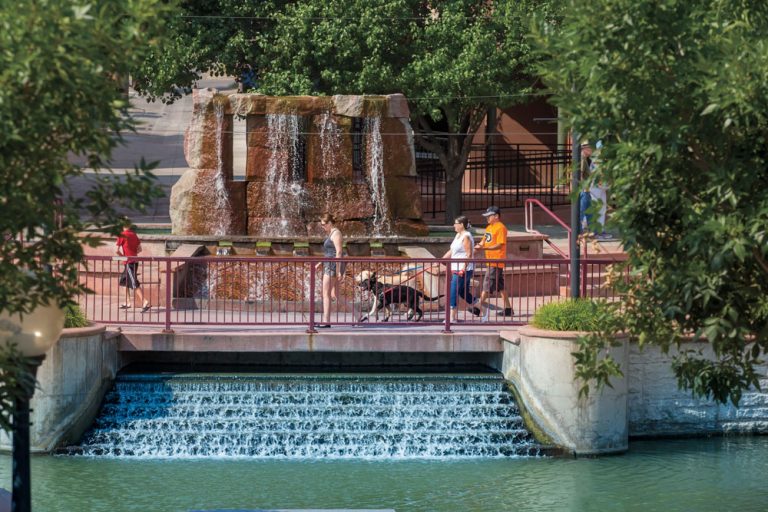 One of the most visited attractions in Pueblo is becoming even more dynamic.

The Historic Arkansas Riverwalk of Pueblo, or HARP and commonly referred to as the Riverwalk, is undergoing an expansion. Three previous construction phases over the years transformed the downtown attraction into the eye-pleasing destination it has become, and now another phase is underway.

In 1991, the original vision of the Pueblo Riverwalk began when a coalition of interested citizens conceived the creation of a Riverwalk through downtown Pueblo, modeled after the famous Riverwalk in San Antonio, TX. In 1995, a 20-year, $12.85 million bond issue passed to build the basic infrastructure, and the new attractive destination opened to the Pueblo public in October 2000.

“The Riverwalk provides cultural, educational, economic, recreational, social opportunities and social experiences to a broad spectrum of the population within our region, and it also revitalized an underdeveloped area in the urban core of the city,â€ Clark says. “It attracts many visitors annually from around Colorado and is the site of numerous events, festivals and community gatherings.â€

The 32-acre waterfront attraction includes a lake, a navigable channel for boat rides along the Arkansas River and a natural area with a stream, and there are several stores, restaurants and office spaces along a boardwalk. The Riverwalk is free of charge and accessible 24/7, and it has been vital in attracting new businesses.

“As for the current expansion, a second unique feature will be a children’s adventure play area with a river theme,â€ Clark says. “Future phases include construction of new HARP offices and a boat maintenance facility to be called Gateway Center, and there are even plans to further expand the channel.â€

One of the signature buildings along the Riverwalk is the Pueblo Convention Center, which is also undergoing an expansion and upgrade.

The Center debuted in 1997 and features a 16,200-square-foot ballroom, five meeting rooms totaling 3,000 square feet, a 2,900-square-foot multi-purpose pavilion space and a 2,120-square-foot pre-function lounge. The building has hosted everything from Western Field Ornithologists to a Congressional Medal of Honor Convention.

“The Center was responsible for filling 4,165 hotel room nights throughout 2017,â€ Corona says. “It’s especially nice that the convention center is conveniently adjacent to the Riverwalk.â€

Also experiencing success along the Riverwalk are several stores and restaurants, including Twenty One Steak that serves delicious food along with beer, spirits and wine. Another great place for dining and entertainment is Brues Alehouse, which opened in 2015 as a family-run microbrewery and also includes a restaurant, music venue, bakery, rooftop beer garden and Riverwalk patio.

“We are in what used to be Pueblo’s police station and jail, creating an impressive transformation with respect to an historic building,â€ says Tony Garcia, Brues Alehouse president. “Our place is open seven days a week and pride ourselves on a from-scratch kitchen and an extensive array of house brewed beers.â€

Garcia says the Riverwalk has become the focal point of Pueblo tourism and development.

“It’s amazing to go to work every day in such a beautiful location,â€ he says. “It is important to us to give Puebloans and visitors alike a memorable experience, and the Riverwalk is a perfect environment to showcase our business and city.â€