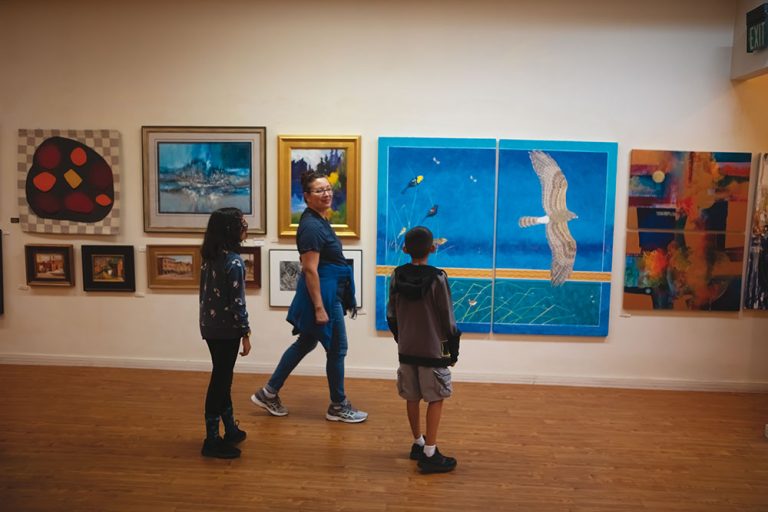 Pueblo residents say there are many reasons to move here – and even more reasons why they plan to stay. A lot of people come to the area for job opportunities and then are wowed by the awesome climate, low cost of living and limitless things to do.

Pueblo is also becoming known for its welcoming spirit and diversity. Kristian Calaj moved here four years ago from Slovakia, by way of New York City. He says he came for the mountains, natural beauty and outdoor activities, but he has also found deep connections with the people in this multicultural community.

“In Pueblo, I meet people from different places, different countries and cultures all the time,â€ says Calaj, who teaches yoga at Studio Share. “This feels like a crossroads for all kinds of people. I have experienced nothing but a warm welcome from locals. My friends here accepted me as one of their own.”

Sonja Reynolds also experienced that warm welcome when she moved to Pueblo in May from Louisville, Kentucky, for a job opportunity as the community employment coordinator with the PFC James Dunn VA Outpatient Clinic. She says she immediately felt embraced by this community.

“I had no clue what I was coming to, and that welcoming feeling means the world to me,â€ she says. “I’ve moved so often, and this was the first time that people went out of their way to show me things and take me on tours, so I learned about the area.”

Reynolds says joining the Greater Pueblo Chamber of Commerce gave her “an instant social calendar – there are a lot of great things to do here.”

In her first months, she’s been invited to barbecues and has been kayaking with new friends. She says the area is very bicycle friendly, and she’s able to ride her bike around her hilltop neighborhood and on downtown streets after business hours without concerns about heavy traffic. Pueblo’s murals and the stories they tell have been a highlight of visits downtown, she adds.

“The pride that people in Pueblo have for the city made me interested in learning about local history and appreciating all that the area has to offer,â€ Reynolds says. “On my third day here, I went out to Liberty Point to see the spectacular views, and a man there told me all about local history. Each person I meet makes an effort to share their knowledge with a newcomer.”

Reynolds says she was pleasantly surprised by the area’s diversity and felt right at home at New Beginnings Church, the very first church she visited.

Affordability = More Money to Have Fun

Residents of greater Pueblo enjoy a much lower cost of living than is available throughout much of the country. The majority of homes here are under $200,000, and this affordability is a major factor for many people who decide to move here – and stay – once they realize all they can get for their money.

Calaj says Pueblo’s cost of living is a fraction of what he paid in New York City, and he puts that extra money toward enjoying life and all the region has to offer. Among his favorite local activities are paddleboard yoga at Mineral Palace Park Pool, City Park Pool and Pueblo Riverwalk, and hitting the slopes at ski resorts throughout the region.

Nadja and Robb Hartman moved to Pueblo from Florida in March when Robb began working as a senior auditor for the Colorado State University System.

“We were pleased to see how inexpensive housing is, rent-wise, compared to where we moved from, and we were able to purchase a home here in Pueblo,â€ Nadja says.

Call of the Wild

Pueblo’s stunning vistas, climate and opportunities for year-round outdoor recreation are a huge draw for visitors and new residents alike.

“We love that, even if it’s hot outside during the day, evenings are nice and cool and allow us to enjoy walking our dog,â€ Nadja says. “Some of the first things we did here were visit the Pueblo Zoo, take our dog to City Park Dog Park and visit the Nature and Raptor Center. Pueblo’s location and proximity to the mountains bring great opportunities for other outdoor activities we enjoy, such as hiking.”

There are hiking and biking trails throughout the area as well as other popular parks, such as Lake Pueblo State Park, which attracts people from near and far for boating, fishing and swimming. Pueblo Zoo is home to more than 400 animals.

Other newcomers say they are pleasantly surprised by the high desert’s abundantly sunny weather, which allows them to enjoy the outdoors in each of the four distinct seasons.

“The most amazing thing for me is that I can ride my dirt bike all winter since it gets warm here during the daytime,â€ Calaj says. “Pueblo’s PMI is a paradise playground for dirt biking. And I can ski all winter, since the greatest ski resorts are an easy drive away.”

Other local treasures include Pueblo Riverwalk, a 32-acre downtown destination that’s open every day and attracts about 500,000 people each year. Modeled after the famous Riverwalk in San Antonio, Texas, the Pueblo Riverwalk features water recreation, dining and shopping opportunities. For boating options, there’s kayaking, canoeing, paddle boarding and pedal boats as well as gondola rides and narrated boat tours. Pueblo Riverwalk is also home to outdoor events, such as the Farmers Market, Steel City Brew Fest and the Boats, Bands and BBQ Festival.

The area’s great weather also allows for outside dining at restaurants such as La Forchetta da Massi as well as Angelo’s Pizza and Brues Alehouse Brewing Co., which offer patio seating along Pueblo Riverwalk.

Just as it’s known as a haven for outdoors activities, Pueblo is also known as a cultural destination with dozens of studios, galleries and other arts-based businesses both downtown and throughout the area.

Pueblo is designated a Creative Corridor and features Pueblo Arts Alliance Studios, an incubator in which dozens of artists work each day. The Sangre de Cristo Arts and Conference Center has been showcasing the art and culture of the American Southwest since 1972. The center provides an array of visual arts exhibitions, performing arts, dance arts and the award winning Buell Children’s Museum as well as arts educational programming and space for events, meetings and performances.

“Despite its small-town feel, the city has so many artistic people and events,â€ Calaj says. “The more I’m going out and meeting people, the more depth and connections I’m finding here.”