Discover how new developments like Tradepoint Atlantic are reshaping the waterfront in Baltimore beyond the Inner Harbor. 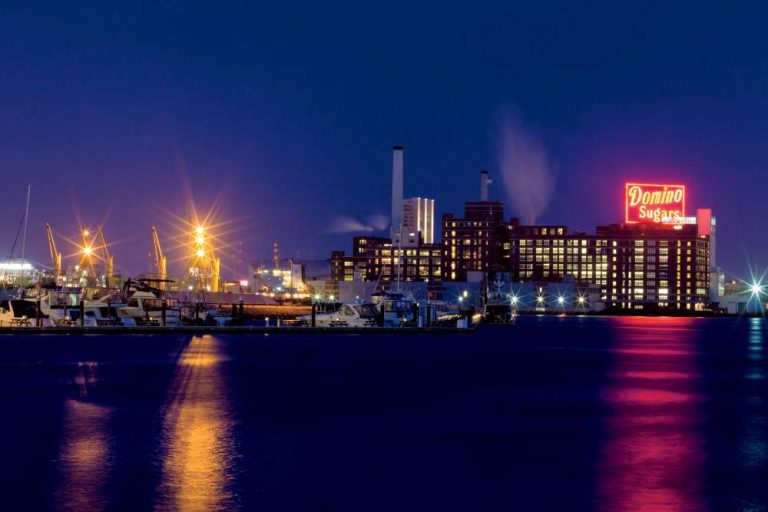 Baltimore’s Inner Harbor is one of the nation’s most successful waterfront reclamations — a once-declining collection of warehouses and old piers transformed over decades into shops, restaurants and visitor attractions. Another waterfront transformation is taking shape past the Inner Harbor, with developers, working in tandem with city and regional economic development officials, planning new projects and new life for historic waterfront land in neighborhoods like Canton, Port Covington and Sparrows Point.

The motivations are, at times, personal. Aaron Tomarchio grew up in Catonsville. Now he’s helping lead the Tradepoint Atlantic project, a redevelopment of the former 3,100-acre Bethlehem Steel plant site at Sparrows Point in Baltimore County into a manufacturing and multimodal logistics complex.

“I had a cousin who worked at the mill when it closed in 2012. He had to go to West Virginia to find work,” says Tomarchio, Tradepoint Atlantic’s vice president of corporate affairs. “I think everyone here who’s local has some kind of connection to Sparrows Point … and a sense of responsibility to re-imagine this property as something beneficial to the city and region.”

The total investment will approach $1 billion, the money coming from Chicago-based Hilco Global and Redwood Capital Investments LLC in Hanover, Md. FedEx plans to locate a 300,000-square-foot distribution facility on the property, expected to open in 2017 and be fully built out in a decade.

Tradepoint Atlantic has landed several other tenants, including Baltimore-based Under Armour, which plans a 1.3 million-square-foot distribution facility at the site. Logistics company Pasha Automotive Services will launch automobile processing operations there and Atlantic Forest Products, a distributor of building materials, is taking 160,000 square feet at the development.

“We’re the next growth opportunity for the Port of Baltimore,” Tomarchio says. “This is an incredible opportunity to clean up and reuse a site that can prosper for generations … just like the mill was in its heyday.”

Tradepoint Atlantic isn’t the only project making new use of old land on the water. Sagamore Development Co., the venture capital subsidiary of Plank Industries spearheaded by Under Armour CEO Kevin Plank, is redeveloping a 266-acre former industrial site at Port Covington with a mix of offices, housing, stores, restaurants, green space and running paths along a revamped shoreline. An Under Armour campus with 5,000 employees is planned as the center of the new development.

A project that matches Tradepoint Atlantic’s investment and may help transform another area is Corporate Office Properties Trust’s (COPT) $1 billion development in Baltimore’s Canton neighborhood. COPT owns 10 acres on the water at the site of a former shipping terminal. COPT’s Canton Crossing plan includes office space, retail, a 400-foot residential tower and a marina — along with pedestrian- and bike-friendly public space along the waterfront.

Columbia, Md.-based COPT, which specializes in developing and leasing office space, bought its piece of the property in 2009 but only recently settled on its development plan. Canton is a key area on the harbor just east of Fells Point, and company officials saw a chance to find a new use for precious land and tap into young professionals’ desire to live, work and recreate in historic neighborhoods.

“There’s a heightened interest in redeveloping and renewing sites like this,” says COPT CEO Stephen Budorick. “It’s a tight-knit and highly sought-after community. People really enjoy living in Canton — there’s a mix of people from young professionals to empty nesters who have flocked to this area. There’s a real opportunity here.”