Discover why Under Armour selected Baltimore for its $5.5 billion campus, Amazon’s job growth is exceeding expectations and other businesses are making Greater Baltimore their destination of choice. 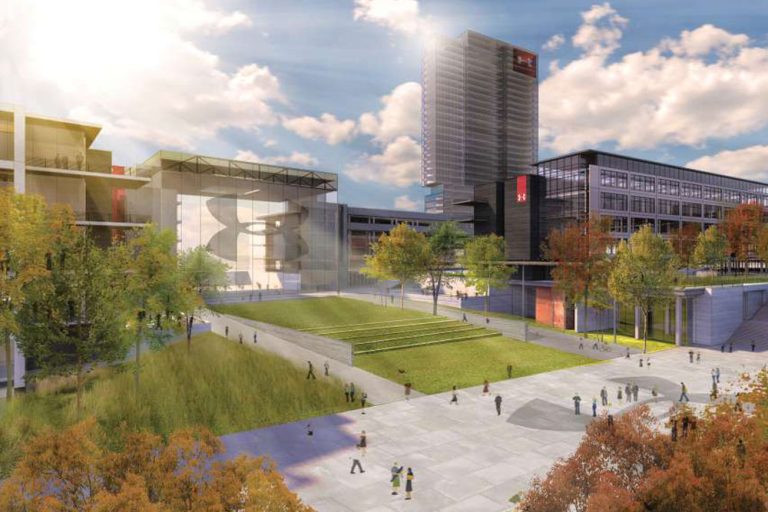 Why is Under Armour part of a $5.5 billion development in Baltimore? And why is spice and seasonings manufacturer McCormick & Company Inc. maintaining its global headquarters in Hunt Valley and FedEx committing to be the first tenant in the planned Tradepoint Atlantic redevelopment project, formerly known as Sparrows Point?

There are numerous reasons why those companies, and many others, are bullish on Greater Baltimore, says Donald C. Fry, President and CEO of the Greater Baltimore Committee (GBC), the region’s premier business organization. The GBC provides leadership on issues related to economic growth, job creation, workforce, transportation and quality of life.

A highly educated workforce, availability of commercial space and housing at comparatively affordable rates are among the major advantages the region offers, Fry says.

Add to those attributes a transportation network that includes Baltimore/Washington International Thurgood Marshall Airport, access to the Port of Baltimore and Chesapeake Bay shipping, rail lines for commuters and cargo and an excellent interstate network that connects to major East Coast and Midwest cities.

“There are 14 colleges and universities just in the Baltimore area, which include a law school, a school of dentistry, and two major medical schools and nursing schools,” he says.

“We have an educated and available workforce, a location that businesses desire in the Washington D.C.-New York corridor and lower costs. A trifecta,” says Shannon Landwehr, President and CEO of the Economic Alliance of Greater Baltimore.

Those advantages help explain Greater Baltimore’s other recent successes, including Pandora’s selection of the city for its North American headquarters, Amazon’s decision to build a second distribution center and exceed its initial employment projections by hiring more than 2,500 people, and Northrop Grumman’s selection of Linthicum in Anne Arundel County for its new Mission Systems headquarters and the home of an $80 billion Advanced Stealth Strike Bomber contract.

Sephora renewed its lease for 316,000 square feet of space in Harford County, and Coastal Sunbelt opened a 340,000-square-foot food processing and distribution center in Howard County.

In Greater Baltimore, which has a $181.4 billion Gross Domestic Product in 2015, the dynamic economy is driven by innovation that runs across its key industry sectors. Those showing the greatest strength include higher education, health care and professional services, including law, consulting, engineering and architecture, commercial construction, life sciences – such as biotech and med tech – shipping at the port and transportation.

The list of thriving sectors and businesses is getting longer on a daily basis, it seems. Technology is particularly dynamic since it is a point where other key industries meet, including biohealth and financial services.

Greater Baltimore’s deep talent pool, combined with other advantages, including access to venture and angel capital, and a network of business incubators and accelerators, helps to create an entrepreneurial ecosystem where business startups thrive.

A total of $820 million was invested in Maryland firms in 2015, the greatest amount since 2006. One of them, Tenable, a tech company that develops vulnerability detection systems, raised $250 million.

The region ranks No. 3 in the country for entrepreneurship, and the cluster of government agencies, like the National Security Administration and U.S. Cyber Command, are breeding grounds for creating and attracting new companies.

Adding to its appeal as a business and personal address, Greater Baltimore offers an unmatched quality of life that includes spectacular natural attractions, world-class arts, entertainment and restaurants, and professional and collegiate sports.

“That region also has great access to a variety of recreational and other amenities – beaches, mountains, Chesapeake Bay, major museums and other cultural attractions,” Fry says.