With the Port of Baltimore, BWI and great network of highways and railways, Greater Baltimore has earned a reputation as a solid transportation center. 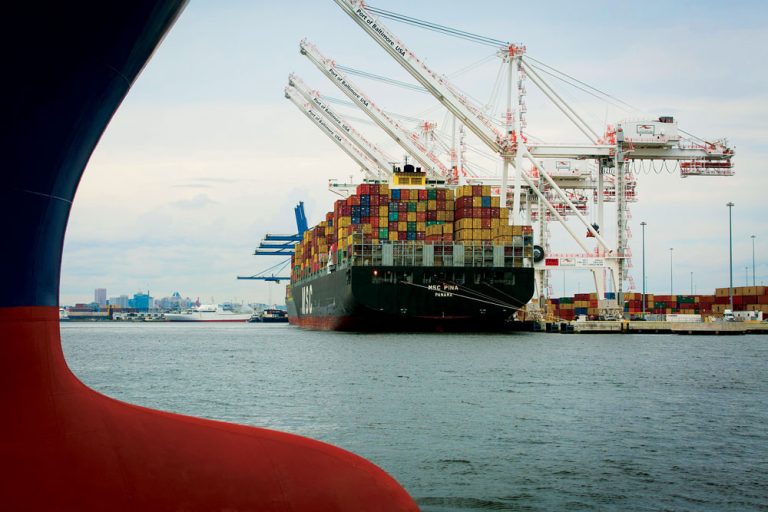 Greater Baltimore’s East Coast location, access to a deep-water port and proximity to three international airports connects it to major markets nationally and internationally and solidifies its place as a global business destination.

Strategically positioned in the mid-Atlantic region of the U.S., Greater Baltimore is the closest East Coast port to major Midwestern population and manufacturing centers and a day’s drive to one-third of U.S. households.

The region offers more transportation options than many other U.S. cities, including multiple interstate highways, such as Interstate 95, a main arterial on the East Coast, major freight rail service and more than 100 trucking terminals.

A jewel of the region’s transportation assets is the Port of Baltimore, one of four East Coast ports with 50-foot-deep channels considered key to attracting the new breed of larger ships that will pass through the expanded Panama Canal.

The Port of Baltimore handled more than 9.67 million tons of cargo in 2015, and had an 8 percent increase in container handling over 2014. The port is served by three of the world’s largest container shipping giants.

The Journal of Commerce recently recognized Baltimore’s Seagirt Marine Terminal as the most efficient container terminal in the U.S. Seagirt is managed by Ports America Chesapeake, which recently signed an agreement with CSX Transportation to handle management of the Port of Baltimore’s intermodal container transfer facility, a move expected to greatly enhance efficiency and productivity at the port.

“This agreement is the first step in creating a business model that will work long term,” says Jim White, Executive Director of the Maryland Port Administration. “This also will help us become more competitive with attracting discretionary cargo destined for the Midwest.”

The port’s focus on major commodities like auto, farm and construction machinery, and forestry products has paid off handsomely. In 2015, the Port of Baltimore handled more autos than any other U.S. port for the fifth straight year. More than 13,600 direct jobs are generated by the port and another 130,000 jobs in Maryland are linked to the port.

Once again, BWI was the busiest airport in the region in 2015 and the growth has continued in 2016. Through February 2016, BWI experienced eight straight monthly passenger records. To meet increased demand for international service, BWI is fast-tracking a $105 million secure connector between its D and E concourses, which will add a new security checkpoint and new gates that will be able to “swing” between international and domestic flights.

For 2016, BWI will see expanded international service to Europe from carriers WOW Air and Condor. British Airways is upgrading its daily service between BWI and London to its premier 787 Dreamliner aircraft.

The airport set a new all-time passenger record in 2015, with more than 23.8 million passengers. Rising international traffic helped drive the record growth. International passenger traffic grew by more than 31 percent for the year.

“We have a longstanding reputation as an airport that offers excellent customer service, a great location, easy access and affordable airfares,” Smith says.