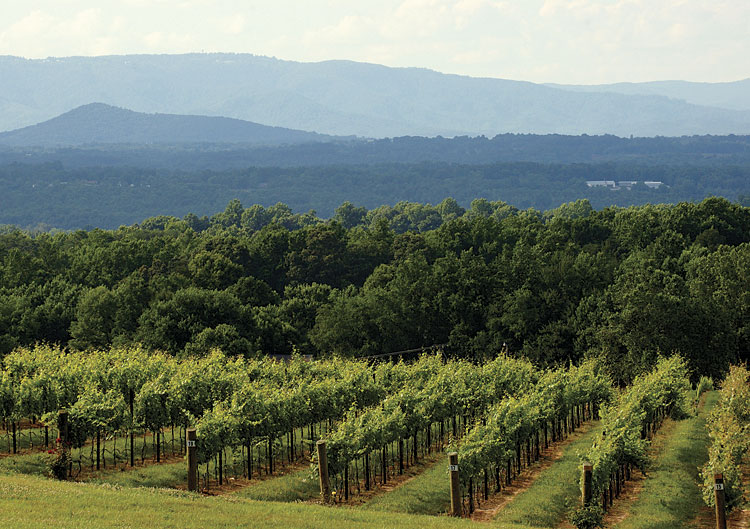 On the western North Carolina land where legendary NASCAR driver Benny Parsons was born and raised, his legacy endures at a vineyard bearing his name.

Benny Parsons Rendezvous Ridge in Purlear is the newest wine operation in the area, but certainly not the only one. There are nearly three dozen wineries and vineyards within a 30-mile radius – and the industry is growing steadily here.

Other area wineries include Raffaldini Vineyards and Winery, MenaRick Vineyard and Winery, both in Ronda; McRitchie Winery & Ciderworks in Thurmond and Elkin Creek Vineyard in Elkin.

Rendezvous Ridge opened in July 2007 as a vineyard, wine-tasting room and racing museum honoring Parsons, who died in January 2007 of lung cancer. His widow, Terri, completed their home on the property and oversees the business operation.

“Benny had owned all this land up here for a lot of years. It had been in his family and handed down from generation to generation,” says Terri Parsons. “We had started getting calls from land developers wanting to purchase the land.”

“The day I moved in, the house was about 70 percent complete, and the grapevines hadn’t even arrived yet,” she says. “When Benny passed away, he never saw them in the ground, but he had worked with our winemaker and picked out what he liked. He picked out the bottles, I designed the labels and the corks, and his youngest son wrote the copy for the back of the labels.

“The land was very important because of the legacy it held for the family,” Parsons says. “[Benny] was born and raised in an old house down the street. When you look at that house and the house I’m in, you can see the great distance his life traveled. He lived there with his great-grandmother.”

Parsons is buried in a family cemetery behind the old home.

In the racing museum, Parsons’ accomplishments as a NASCAR driver and later as a respected racing commentator are showcased, and Terri Parsons herself gives the tours. Parsons, who started his driving career in 1963, was the 1973 NASCAR Winston Cup Series champion and won the Daytona 500 in 1975.

Taking the Snob Appeal out of Wine

Rendezvous Ridge occupies six acres, and the operation produces approximately 2,000 cases of wine a year, Parsons says. “What we did and what Benny wanted to do was take the snob appeal out of wine,” she says.

“Part of what makes us unique is our wine-tasting room is located in a racing museum. He didn’t want race fans to feel like they had to know a lot about wine to enjoy the experience.”

Parsons says the growth of the local wine industry is exciting.

“There is nothing better,” she says. “The more of us the better.”

Many of these businesses are showcased each year when downtown North Wilkesboro hosts the annual ’Shine to Wine Festival. The event features entertainment, food, art and wine from some 15 local vineyards and wineries.

Check out more on the food scene in Wilkesboro, NC.