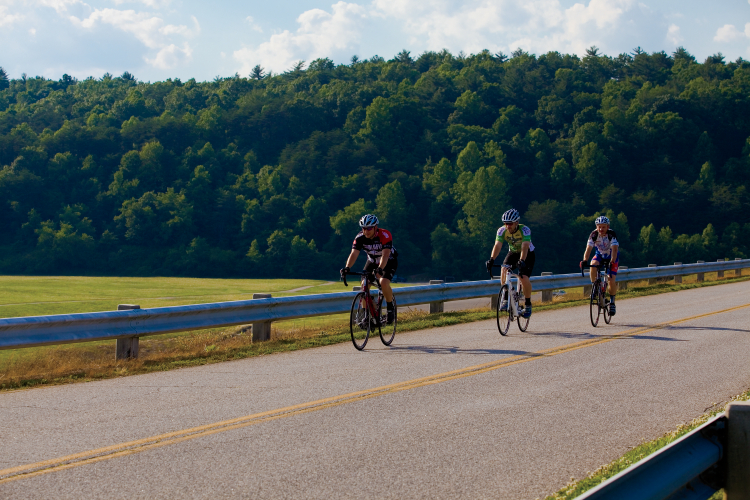 What could be finer than a peaceful bike ride along a quiet rural road on a sunny spring day? How about dragging your muddy bike up a gravelly hill and being greeted by a raucous cowbell serenade?

Around here, bicycling is many things to many people. For some, it’s easy outdoor family fun. For others, rigorous mountain biking offers the perfect weekend getaway. And still others find cycling a healthy, environmentally friendly way to commute. In Wilkes County, they all can find what they prefer.

“Wilkes offers the best of everything for road cycling,” says Andrew Stackhouse, organizer of the Wilkesboro Cyclocross Festival. “It has a fantastic network of quiet country roads that are clearly marked, and a wide variety of terrain, from trails along the Yadkin River to climbs over Brushy Mountain, and there are fantastic trails for mountain biking.”

Stackhouse’s Cyclocross Festival, which will be held for the fourth time in November 2013, combines aspects of road biking and mountain biking for what he describes as “a somewhat foolish spectacle,” but one whose success netted a Wilkes Tourism Development Authority grant for $4,000. The annual weekend festival, expected to draw 300-400 attendees, was named best new event in Cyclocross Magazine‘s reader poll in 2013.

Cyclocross races, which last from a half hour to an hour, are held on contained courses that feature obstacles, gravel, steep descents and climbs, sharp curves and lots of mud. Fans and competitors tend to wear silly costumes, shout friendly insults at one another, clang cowbells and joyfully sample free beer. As Stackhouse says, cyclocross racers embrace miserable race conditions.

Fortunately, the county offers much non-“miserable” cycling too. The W. Kerr Scott Reservoir’s 234 miles of mountain-biking trails cross varying terrain, from the very steep Dark Mountain Trail to the technically difficult Warrior Trail to the beginner-friendly Overmountain Victory Trail, named a National Recreation Trail in 2012. All are popular with local cyclists, such as the Brushy Mountain Cyclists Club, which puts in prodigious effort to help maintain the trails with the U.S. Army Corps of Engineers. Increasingly, the reservoir is drawing cyclists from other places too.

“It amazes me. But the trails are full every weekend, all year round,” says Jory Shepherd, assistant operations manager for the reservoir.

Road cycling is also growing in popularity, from short rides on in-town greenways to tours on the area’s many bike-friendly roads. A new eight-county bike plan by the North Carolina Department of Transportation launched this year, and a state-wide bicycle plan will link Wilkes to other counties’ bike routes. The new Complete Streets state policy will help make roads safer for pedestrians and cyclists, and hopefully encourage people to take to the streets on two wheels.

“As we build up more bike lanes and bicycle facilities like greenways, the safer people feel about cycling, the more they will cycle and the more that will encourage others to cycle too,” says Dean Ledbetter, senior planning engineer for NCDOT division 11. “This will help us to provide better accommodations for pedestrians and cyclists as we plan.”

Find more on the outdoors in Wilkesboro, NC.