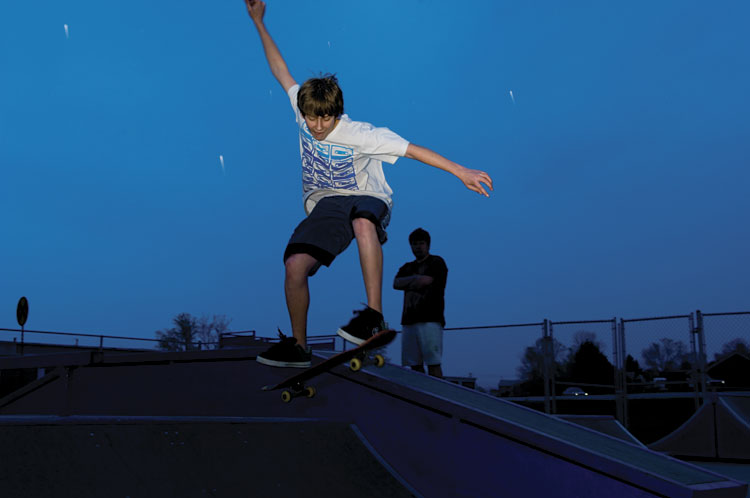 Every day, the area’s two parks, with high-flying ramps and half-pipes, beckon to skaters of all ages, sending parents racing to local sporting goods stores.

Located in downtown Smoot Park, the site has become a favorite after-school and summer post for many area youths, who also take advantage of the park’s public pool and other offerings.

“Skateboarding is pretty big right now, and kids and parents were asking why we didn’t have a skate park,” says Nelson Martin, Town of North Wilkesboro parks and recreation director. “Kids had been skating downtown on the sidewalks, post office and church steps, and we wanted to draw them off the streets into a more controlled atmosphere.”

A public meeting allowed skaters to provide input to city planners, and, according to Martin, helped foster a sense of ownership among many of the skate park’s regular patrons. More than $100,000 and multiple truckloads of cement later, the park now welcomes up to 100 skaters a day in warm summer months.

“A lot of the kids are really proud of the park, and try to protect it,” Martin says. “It gives them a place to go and something to do, since just about everything downtown is off limits to skateboarders.”

Adrenaline junkies also take refuge at The Edge Skate Park, located at1606 Industrial Drive in Wilkesboro. The popular park, which opened in 2003, features four-foot ramps with a half-pipe. The project was a $120,000 investment for the city, and brings skaters of all ages out to rollerblade, skateboard and bike with like-minded high-speed enthusiasts.

“This park has allowed skaters a safe place to skate away from the highways and has calmed the business owners,” says Kevin Anderson, Wilkes County Parks and Recreation director, referring to shop owners’ concern for their customers who are walking on the sidewalks.

The Edge also is home to Wilkes County’s BMX Bike Track. The 1,100-foot track welcomes dozens of adventurous biking enthusiasts each week and draws crowds with weekly Saturday night races from March through October. The public track is one of only four BMX tracks in North Carolina sanctioned by the American Bicycle Association.