Get the dish on the Wilkes Playmakers theater group in Wilkes County, NC. 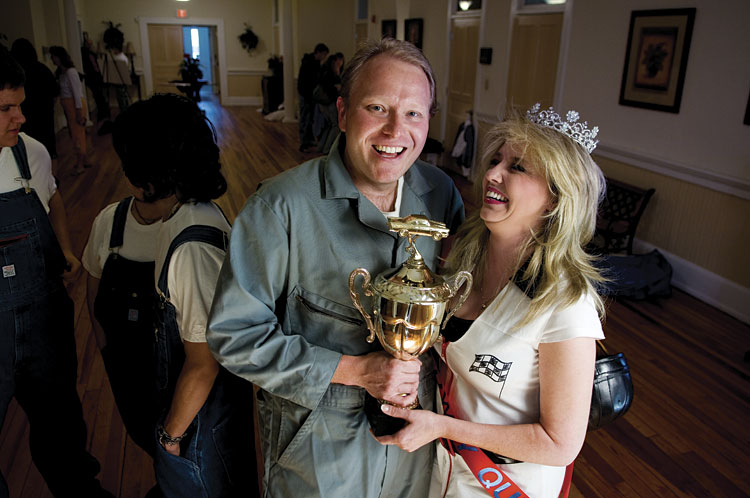 Moonshine, fast cars and the law provide all the makings of a great story – and it’s the true tale of Wilkes County’s colorful past.

Today, people share in the area’s history as a moonshine capital and witness the origins of local moonshine runner turned NASCAR racing legend Junior Johnson at the riveting outdoor drama, Moonshine & Thunder – The Junior Johnson Story, staged by the Wilkes Playmakers at the Forest’s Edge Amphitheatre in Fort Hamby Park.

Not one, but two shows bring the county’s exciting heritage to life. Tom Dooley – A Wilkes County Legend, the story of the 19th-century trial and hanging of Tom Dula (which is pronounced Dooley), who was convicted for the murder of Laura Foster, is also a summertime fixture onstage.

Karen Reynolds, executive director of the Playmakers, wrote both outdoor dramas, and has been with the nonprofit organization since its start in 1990. Tom Dooley is performed annually from July 5-18, and Moonshine & Thunder has a weeklong run, June 26-July 3. The subject matter for the plays is both interesting and entertaining, she says. “Tom Dooley took about a year to write,” she says.

“I was not as familiar with the racing and the moonshine, so it took a couple of years to write Moonshine & Thunder. One of the reasons was moonshiners aren’t so quick to talk to you until they know you, and there really is a code of silence in the foothills. It took me a long time to get them to talk to me and tell me stories.

“And the one who was most open – I guess he’s most used to it – is Junior Johnson himself,” she says. “When he realized this [play] was really going to happen, he invited me to breakfast. He has breakfast every morning in his garage with all of his friends. They sat around and told me stories, and I got a lot of material from that.”

Johnson won 50 NASCAR races in his driving career, including the Daytona 500 in 1960, and later became a team owner. He honed his driving skills running “white lightning” as a young man and served time in prison after being convicted of moonshining in 1956. President Ronald Reagan later pardoned him.

Johnson has seen the outdoor drama that bears his name, Reynolds says.

“He did come to see the show and absolutely loved it,” she says.

The multimedia show features film clips from NASCAR, live actors onstage, old cars – and a moonshine still is even blown up during the drama.