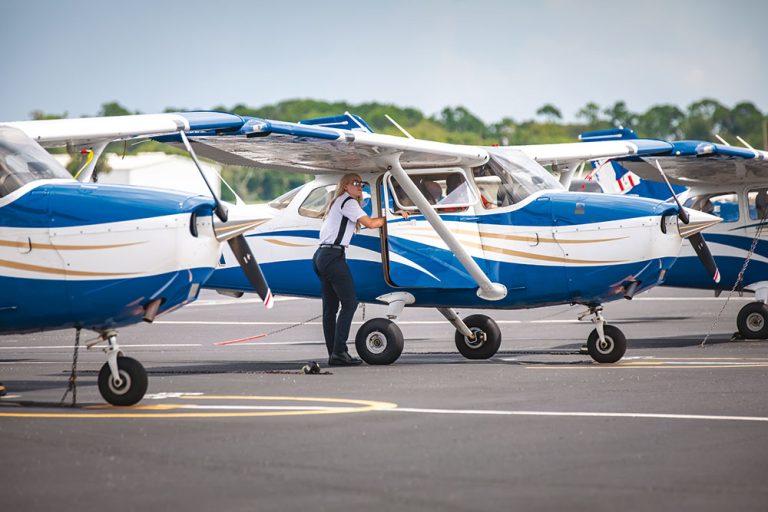 Tomorrow’s jobs are being created today in the Greater Daytona Region thanks to a powerful set of resources that support innovators and entrepreneurs.

The region’s major technologically oriented industry sectors, including advanced manufacturing, aviation and aerospace as well as motion picture and video production, have spawned numerous companies that can leverage the region’s lower costs and access to skilled talent.

Greater Daytona is a hub for aviation and aerospace innovation, with proximity to Florida’s Space Coast and assets that include Embry- Riddle Aeronautical University, which turns out more than a quarter of the nation’s pilots.

The MicaPlex is an incubator space at Embry-Riddle Research Park where startups can collaborate with the university and tenant partners to create and refine new products. TECHFIT Digital Surgery, a company created by Colombia-based Sampedro, opened a state-of-the-art prototyping and innovation lab at the research park in 2018.

The Volusia County Business Incubation Program, powered by the University of Central Florida, helps startup companies develop into financially stable, high-impact businesses by providing tools, training and infrastructure that help facilitate smarter, faster growth. The program has assisted hundreds of new businesses since its inception in 1999. The Volusia County program is housed in an 8,000-square-foot facility at the U.S. Customs terminal at the Daytona Beach International Airport.

“In addition, we have our Soft Landing Program that helps international firms and domestic companies headquartered outside the region quickly adapt and connect to the central Florida business community,â€ says Connie Garzon-Bernal, associate director of the Volusia County Business Incubation Program.

The program provides support for startups in early stages and has helped nearly 400 local companies reach their potential faster. That support has translated into those companies creating more than 6,700 local jobs over the last two fiscal years. The Volusia County Incubator, which opened in 2011, is 100% occupied, with 20 startup companies and six more in a pre-incubation program.

“It’s an exciting time to be in the Greater Daytona Region,â€ she says.

The Florida High Tech Corridor Council’s Florida Virtual Entrepreneur Center, which can be found at FLVEC.com, is the leading online resource in Florida that promotes and connects entrepreneurs. The website lists events of interest to business leaders and entrepreneurs, offers resources they can use to make their businesses more successful, and connects entrepreneurs to one another so they can share best practices, gain inspiration and build partnerships.

“There are online directories where you get the name, address and contact information of business owners, but on FLVEC.com, you learn about who these business owners are, why they are doing what they do, how they got started, and learn from their successes and challenges,â€ says Michael Zaharios, director of the Florida Virtual Entrepreneur Center.

The MicaPlex brings together entrepreneurs in technology, aviation and aerospace with Embry-Riddle faculty, researchers and alumni, and the results are positioning Volusia County as a major player in the global aviation and space economy.

Consider Censys Technologies Corporation, which produces longrange, high-efficiency drones. The company, founded by three Embry-Riddle alums, was among the first to join the MicaPlex as an incubator client in 2017. Censys hired interns, raised funding and ultimately became the first company to graduate from the incubator into a tenant space at the Research Park. Today, the company has five products on the market and a team of full-time employees.

“Business owners and entrepreneurs cluster,â€ Zaharios says. “Before someone picks up their operation to move here or starts a business here, they want to know others are being successful here. It solidifies their decision-making process.”