Discovery how Gainesville's accelerators, incubators and other resources are creating a wealth of new tech entrepreneurs. 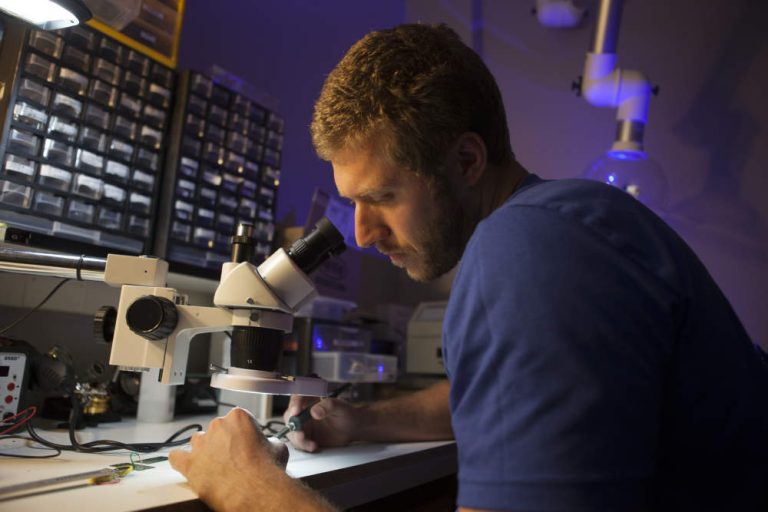 In 2002, Deepika Singh and her husband, Dr. Rajiv K Singh, launched Sinmat in the Gainesville Technology Entrepreneurship Center (GTEC) to commercialize technology to enhance manufacturing microchips. Today, the company’s workforce has grown to 23 and it operates from 20,000 square feet of space for manufacturing an array of inventions that make high-tech products better, from oil-drilling bits to high-power electric motors. Singh credits GTEC, now operated by Santa Fe College, with helping get Sinmat off the ground.

“We can say that the company would not be here without the help of the center,” Singh says.

The reputation of Gainesville as a global hub for innovative companies is being fueled by the wealth of talent drawn to the region by the University of Florida and Santa Fe College, a vibrant quality of place that meshes with entrepreneurial activity and a network of resources and facilities that promote startup enterprise. The region hosts nearly 120 software and IT companies alone that employ nearly 1,700 workers.

The University of Florida is a driver of the region’s innovation economy. UF helps stock the region’s pool of knowledge workers and ranks among the top public universities in commercializing new technology and bringing it to market.

The region’s emergence as a center of technology innovation is being shaped by homegrown talent, such as web-based music streaming service Grooveshark, founded by two UF undergrads in 2006. The startup has grown into an enterprise with 35 million users and 120 employees.

Companies far outside the region are also discovering Gainesville’s inviting tech ecosystem. Mobiquity, a Boston-based designer and developer of custom mobile solutions, opened a Gainesville office in 2013, and MindTree, a software company from India, put down roots in the region in 2012. The region offers abundant resources to promote innovation, including a network of incubators, co-location and accelerator facilities. In fact, Gainesville has more incubators per capita than any other U.S. city, and they run the gamut from small startups in their own right to large, university-connected programs.

A former Firestone Tire & Rubber building used to outfit Model Ts in the 1930s is now the breeding ground for tomorrow’s breakthrough companies. Starter Space, the brainchild of local tech professionals Quang Tran and Payal Khurana, is a hybrid co-work/incubator venue that has been at capacity virtually since the day it opened. Tran calls Starter Space a “mom and pop” incubator without the resources of the some of the larger operations but with a focus on the basics and contributing to the entrepreneurial community.

“We focus on making sure they have a product to sell,” Tran says. Haul Box is one company that got off the ground at Starter Space.

UF grads developed an app and storage solution for college students to store their unneeded gear from dorm rooms and apartments.

The Gainesville Technology Entrepreneurship Center opened in 2000, and has been the platform for many companies to get their start. For instance, Innovative Scheduling, which started at GTEC and later changed its name to Optym, has expanded its development of planning and scheduling software for the transportation and logistics industry. In 2014 Optym expanded its operations in Gainesville, creating 100 new jobs and spurring a capital investment in the region of nearly $5 million.

One of the largest facilities for entrepreneurs in the region is the Florida Innovation Hub, a 48,000-square-foot incubator at Innovation Square that helps startup companies based on technologies emerging from UF’s labs. Director Jane Muir says the center offers resident partners such as law firms, accounting firms and venture capital partners who provide pro bono services to other companies in the building. Shadow Health was one of the first tenants when the center opened three years ago, and has grown to 60 employees supporting an interactive learning platform for medical students.

“It’s a beautiful facility and full of energy and companies that are creating products that are changing the world,” Muir says.