Learn how Gainesville, Fla., development projects like Depot Park and Innovation Square are bringing more investment and activity to downtown. 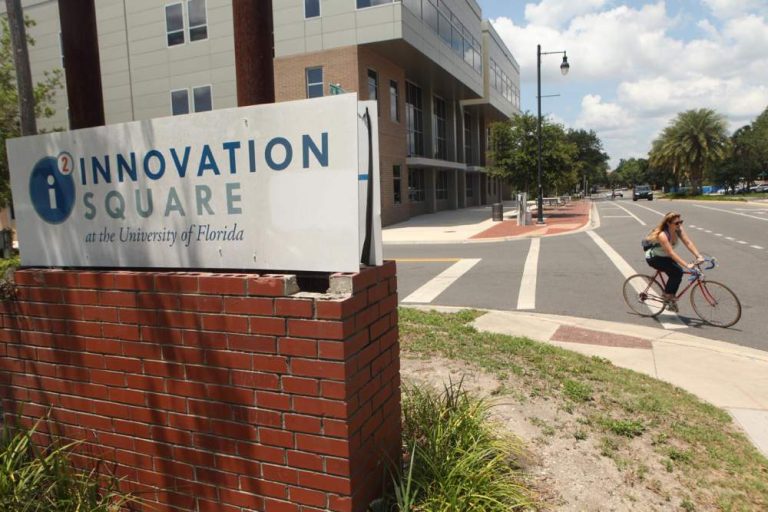 In Gainesville, potential is palpable. People from diverse backgrounds, fields of study and geography are coming to the region and infusing it with fresh energy and ideas. That feeling of possibility extends to the city’s downtown spaces, where major projects are enhancing walkability, vibrancy and opportunities for connection and commerce.

Development starts at the heart of the city’s historic district, the Bo Diddley Community Plaza, named for the legendary rock ‘n’ roll artist, guitarist and songwriter who lived in Gainesville the last years of his life. The plaza, which includes a covered stage, already hosts a weekly farmers market and numerous concerts and festivals, including the international punk rock festival The Fest, but the city is working to increase its size and appeal as an event space.

“Adding a waterwall entry feature, a green room for more special events and a second cafe space to the plaza will encourage more events in the heart of downtown at all times of the day,” says Anthony Lyons, director of the Gainesville Community Redevelopment Agency (CRA).

The revamped space will also include new landscaping, enhanced bike facilities, benches and an information kiosk, along with a revival of a favorite local Indonesian-inspired restaurant, Steamers, in a restored 1920s-era gas station, Bethel Station, on the plaza’s south side.

The city’s most ambitious project is the 32-acre Depot Park, which will transform a former industrial site into a downtown gathering spot with fountain-filled ponds, extensive trails and $1.6 million in renovations to a historic train depot that will house restaurants and a museum. The park will include a football-field-size playground with water springs and equipment modeled after Gainesville’s history and ecology, an outdoor music amphitheater, sculpture gardens and the soon-to-be-built Cade Museum of Creativity + Invention.

Businesses are picking up on the excitement surrounding the revitalized brownfield area, with establishments from a microbrewery to a top cartooning school locating in the former utility warehouse district near the park.

Another development taking shape is Innovation Square, a 40-acre master-planned greenway project that connects the University of Florida’s main campus with Gainesville’s downtown, bringing the business and research community together. When fully built out, the square will include 5 million feet of office, research and high-tech space, along with residential options like the new Savion Park Luxury Apartments, and retail, hotel and open space. Innovation Square is already drawing investment from international firms like Zeeko Technologies, a U.K.-based producer of intelligent robotic polishing machines.

“Our No. 1 priority was to be close to the university, and UF is just a few blocks away,” says Arthur Graziano, a UF graduate and director of Zeeko’s Gainesville research center – its sole U.S. facility. Proximity to UF will allow the firm to collaborate closely with researchers doing groundbreaking work in the polishing field and share their resources, while also “being able to choose from the next best talent coming out of the university,” Graziano says.

Retail of the Future

Development is also extending beyond downtown to other city centers. Butler Plaza, the city’s retail core, is being transformed into a walkable town center, and the mixed-use Celebration Pointe development is rising near the intersection of Archer Road and I-75, bringing specialty retail, restaurants and entertainment, upscale residential units, hospitality and meeting space, and Class A-office space with high-speed technology to the corridor. The walkable, sustainable environment planned for Celebration Pointe distinguishes it from most retail projects its size, says Ralph Conti, a partner in the project.

“We are building something that is very forward-thinking,” Conti says.

A pedestrian-friendly “Main Street” will anchor the development, which will include abundant green space, walkways and bike paths, bus transit to area communities and a pedestrian bridge over Interstate 75 linking Celebration Pointe to Butler Plaza. The development encompasses 100 acres of conservation land that will include hiking and biking trails connecting to surrounding nature preserves. Set to break ground in summer 2015, the $170 million project has already attracted the boutique Hotel Indigo and an anchor store, Bass Pro Shops, and it will eventually add a 10-screen luxury movie theater, Conti says. Celebration Pointe’s technology park is drawing interest from fast-growing firms like InfoTech, a leading consulting and software company for public and private contractors that is building its new 60,000-square-foot headquarters there. The park’s collaborative community atmosphere fits InfoTech’s culture, and its amenities and transit options resonate with the firm’s 240 employees, says president Tom Rothrock.

“Having amenities like walking and biking trails, restaurants and entertainment within walking distance of our building will be very desirable for our current employees as well as potential new employees,” he says.