At Innovation Square in Gainesville, the power of research at the University of Florida and the energy of the region's business community are coming together to fuel the rapid growth of an innovation ecosystem that is creating jobs and transforming industries. 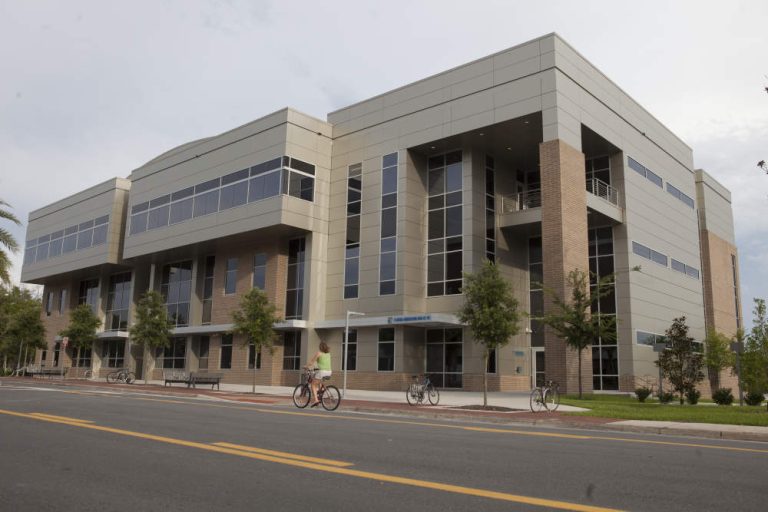 At Innovation Square in Gainesville, the power of research at the University of Florida and the energy of the city’s business community are coming together to fuel the rapid growth of an innovation ecosystem that is creating jobs and transforming industries.

“Gainesville is on track to accomplish that, to be part of an entrepreneurship ecosystem similar to Silicon Valley,” says Yatit Thakker, CEO of Omninox Publishing.

The company, which once shared office space with a hookah bar, is a tenant of Florida Innovation Hub, a 48,000-square-foot incubator of startup businesses that are commercializing technologies emerging from the university’s labs.

Florida Innovation Hub is a key component of Innovation Square, a 40-acre, master-planned development that will include 5 million square feet of office, research and high-tech space along with residential, retail and hotel components conveniently located near both the university’s campus and downtown. Other areas will be preserved as open space.

Thakker and Omninox’s other founders created the company in 2012 while they were studying environmental engineering at UF. Their breakthrough idea was to create digital, interactive study materials for Advanced Placement high school classes.

At Florida Innovation Hub, the company has quick access to mentorship as well as services such as printing and shipping all in one location. “It has contributed to our staying in Gainesville, and many of our team have a relationship with the university,” Thakker says.

Florida Innovation Hub is a key element in the growth of Gainesville’s knowledge economy, says Jane Muir, its director.

“The creation of the Florida Innovation Hub in 2011 gave tremendous visibility to our community about how fortunate we are to live in a town that has a tremendous source of innovation, from both researchers at UF and the many brilliant student minds, but also a talent pool energized to turn the innovation into products and services that make the world a better place,” she says.

The Hub is a valuable tool for growing ideas and for commercializing university research, she says.

“Certainly, there have been startups in our community for many years, but being able to create a hub for this type of activity made it a destination place and helped people get energized and excited about all the possibilities,” she says.

One of the first companies there was Prioria Robotics, a company that has since graduated from Florida Innovation Hub and has gone on to transform the Unmanned Aerial System (UAS) industry and provide new capabilities for civilian customers and the military.

“The Hub really became a physical embodiment of the innovation ecosystem that was already here in Gainesville,” says Bryan da Frota, Prioria’s CEO. The company was founded by business and engineering graduates from UF.

The company produces the Hex Flyer, a multi-rotor drone aircraft that weighs just 14 pounds and can be launched and operated by a single person to provide information related to emergency management, drug interdiction, mapping and surveying, monitoring of incidents, search and rescue and other uses.

Prioria’s flagship product, the Maveric UAS, has been acquired by the U.S. Military. At just two pounds, the bendable-wing vehicle can be carried into combat by a single soldier and provides instant battlefield information.

Maveric, which is designed to be the first “smart” UAS, uses Prioria’s proprietary processing platform – called Merlin – to provide image processing and control to reduce dependence on communication with the operator on the ground.

With resources including Innovation Square and Florida Innovation Hub, the Gainesville Area Chamber of Commerce and the UF Office of Technology Licensing, Gainesville is home to a growing number of knowledge-based businesses that strengthen one another, da Frota says.

“We do find synergy with the network. … I find that I have an opportunity to connect to other tech entrepreneurs and build off their shared experience,” he says.

With its combination of living, shopping, business and research space, as well as open, undeveloped spaces, Innovation Square is designed to foster the exchange of ideas, says Ed Poppell, with the University of Florida Development Corp.

“Innovation Square is strategically located near UF but near downtown, so location is critical to attract the knowledge worker and millennial generation, given their desire to have a live-work-play lifestyle,” Poppell says.