With two major medical centers offering both primary and advanced care, Gainesville residents can be assured access to the highest-quality health care available. 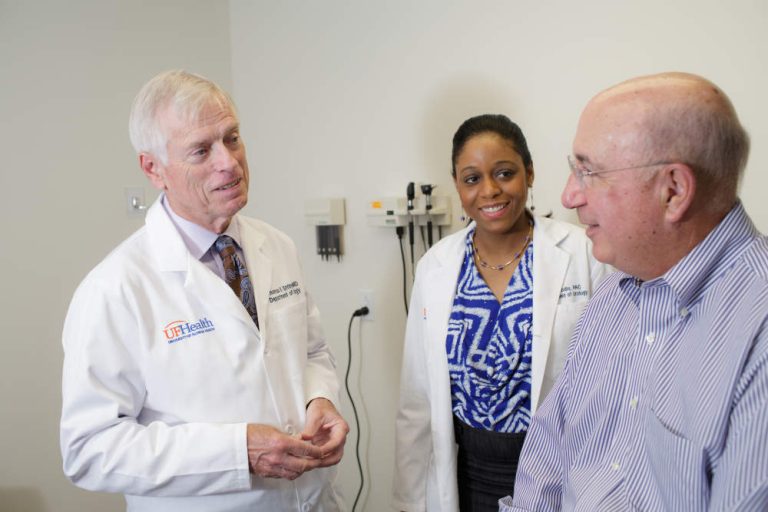 More often than not, health care tops the list of quality of place amenities that attract relocating families and businesses. In Gainesville, residents are fortunate to have two of the state’s high-ranking medical centers – University of Florida Health and North Florida Regional Medical Center, a Hospital Corporation of America affiliate – right in their backyard.

Both facilities offer a sizable selection of services, from primary and preventative care to the most highly specialized treatments and procedures. UF Health comprises the UF Health Science Center on the Gainesville campus and its six academic health colleges – Dentistry, Medicine, Nursing, Pharmacy, Public Health and Health Professions, and Veterinary Medicine, as well as UF Health Jacksonville, its teaching hospital and its colleges of Medicine, Nursing and Pharmacy.

According to Dr. David Guzick, Senior Vice President Health Affairs and President of UF Health, UF Health Shands Hospital is the main referral facility for complex medical services in the state and each year treats patients from all 67 Florida counties as well as from across the country and around the globe. The relationship with the university has allowed UF Health to stay at the forefront of research and development of treatment for major diseases.

In fact, leadership at both hospitals share a symbiotic relationship with the university and the Gainesville community.

“The strength of our ability as a university and as a health system to develop a brand regionally and nationally is in large part because of the Gator Nation,” Guzick says. “Gainesville is the university, and the university is Gainesville. It’s different than if you ask someone at Emory in Atlanta about the relationship it has with the community because Emory is just a small part of the economic landscape there. It’s a much more personal relationship here given the size of the Gainesville community.”

“They understand our community and the people who live here,” Rittenhouse says. “We feel that we’re Gainesville’s community hospital.  We are very aware that our success hinges on support from throughout our community, and we are grateful for that support.”

Rittenhouse says the hospital’s affiliation with HCA, one the nation’s largest health care organizations, makes it possible to invest in advanced technology, such as the CyberKnife, MAKOplasty and the da Vinci Robotic Surgical System, not typically available at a community hospital.

“Our affiliation also helps ensure North Florida Regional has experienced senior leaders with access to research into medical needs here and medical trends nationwide so that strategic planning for the future is sound and will provide the care patients will need in the future,” Rittenhouse says.

A Shot to the Economy

Gainesville’s medical centers also have a significant impact on the region’s economic health.

“The increase in research grants brings in new dollars, which in turn means new staff, which has a ripple effect on the local economy. We’re bringing in dollars from outside of Gainesville into the community,” Guzick says. “Plus, the individuals we recruit tend to have high-paying jobs, and that impacts many businesses that rely on consumers – from the purchase of a home to the local dry cleaner.”

UF Health employs 22,000 people, of whom 10,000 work at UF Health Shands Hospital. In addition, the majority of the vendors serving the hospital are local, from caterers to furniture suppliers. North Florida Regional employs more than 2,000 people and has more than 500 physicians on its medical staff.

Rittenhouse says the estimates on the hospital’s total economic impact to the area in 2013 was well over $200 million, including nearly $136 million in salaries and benefits, charity care of $26.8 million, taxes paid of nearly $38 million and capital investment of $26.3 million.

“When you look at those numbers and think about what they represent, it’s easy to see our impact on our region’s economic growth and stability is very significant,” she says.