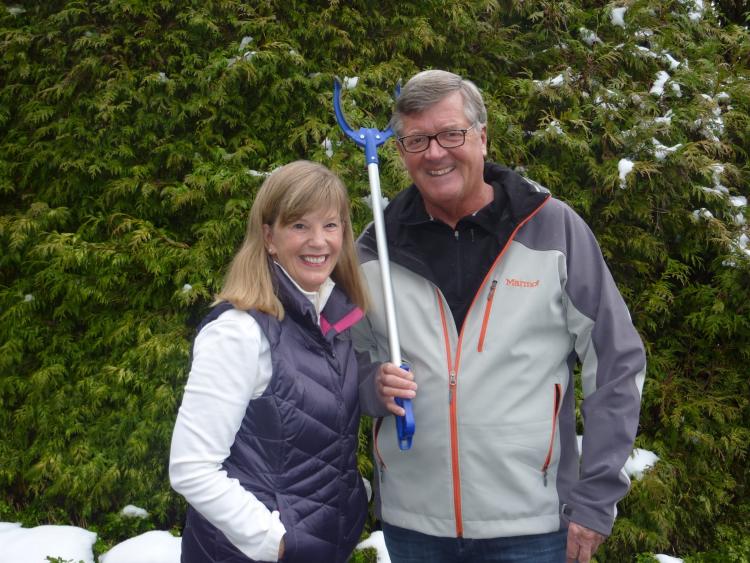 When Bellingham, Wash., residents Dick and Peggy Campbell decided to pick up the trash littering a stretch of roadway they traveled every day, they had no idea that their simple act of community service and personal responsibility would attract any attention at all. But one of their neighbors took notice, and thanks to his shout-out, so did we.

Dick and Peggy Campbell, who own Bellingham Millwork Supply Co., met in college at Western Washington University and have lived in Bellingham (one of our Top 100 Best Places to Live) since 1972. They love the community where they have raised their family and built their livelihood.

But late in 2013, driving from work to their home on Lake Whatcom through the Old Lakeway area – a road where they also enjoy frequent walks – they noticed something troubling.

“It seems lately that a lot of people just throw trash out of their car window,” Dick Campbell says. “It’s really a beautiful little stretch of road. It does not deserve to be trashy.”

For a lot of people, noticing the trash and complaining about it would have marked the end of the story. Not so for the Campbells.

While walking one day, Dick told Peggy he wanted “one of those grabber things that you can pick up garbage with” for Christmas.

After the holidays, armed with Dick’s new Superior Grabber, the Campbells got busy picking up trash. That’s when their neighbor Don Beaty happened by. The three chatted for a bit before Beaty continued on his way. When he wrote a glowing letter to the editor of the Bellingham Herald a week later saluting the Campbells and vowing to follow their example, they were blown away.

“We didn’t do it for publicity, that’s for sure. We did it to make us feel better. We just feel good about doing something that makes the place look better, and it gives us something to do on our walk,” Dick says.

“It was kind of a simple thing,” Peggy adds. “We were shocked when Don wrote that letter to the paper. We just thought, ‘You know, we have to drive this road every single day, and it upsets us to see garbage there.’ So we decided to pick it up. Bellingham is a lovely community, and we love it dearly. It’s given us lots of opportunity, so this was just something we could do to give back.”

But learning that they have inspired others – whether to pick up trash or some other act of service – feels pretty great too, the Campbells acknowledge.

“People need to take pride in their communities and neighborhoods,” Peggy says. “And I must say there are a lot of people in Bellingham who do.”