Thinking of moving to Orlando? From rent to groceries to lattes, here’s how much it will cost you. 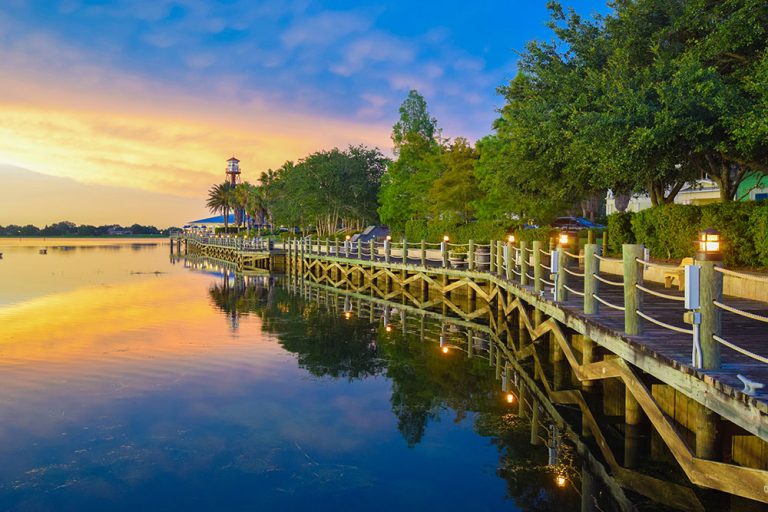 Curious about the cost of living in Orlando? How much does it cost to live near Disney World? What’s a typical mortgage? Keep reading for insights into life in the capital of amusement parks!

How long have you lived in Orlando?

I’ve lived in the actual city of Orlando for the last four years. Before this, I lived in a suburb of Orlando from the time I was seven months old until, well, now. I took a brief break from Orlando in college when I attended the beautiful College of Charleston!

Living the Dream: I Moved to Orlando to Get a Job at Disney World

What’s your rent/mortgage in Orlando?

Our mortgage is $1,200 a month, which is a great deal for our area. My husband bought our house in 2011 when the market was low. It’s a 1952, three-bedroom, one-bathroom and it needs some work. But the neighborhood is amazing and our property value has increased like crazy! We had an abandoned house next door that had to be torn down and it still sold for more than our house!

Who are the main employers in Orlando? Are jobs relatively easy to find?

If you’ve seen The Florida Project you know that Orlando has a mix of jobs. The hospitality industry (Disney, Universal, hotels, etc.) are obviously major Orlando employers. Low-wage, hourly and service jobs are relatively easy to come by.

How’s the access to grocery stores and food in Orlando? Are you going to be able to find things like quinoa and gluten-free pizzas at your local grocery store?

We live in an amazing place for groceries. We have access to the basics: Trader Joe’s, Whole Foods, Fresh Field Farm, Publix and year-round farmers’ markets. We also have a lot of local shops, and Asian and Hispanic markets can be found all over Orlando. You can find just about anything you want!

How family-friendly is Orlando?

Not surprisingly, Orlando is chock full of family events. We have an incredible library system, an amazing science center, you-pick farms, carnivals, festivals and more.

What’s it like to be a child-free adult in Orlando?

Being child-free in Orlando is great! Our local children’s science center even has its own adult nights! There are tons of festivals, breweries, bars and great local restaurants.

You’re not retirement age, but do you have any insights into how elder or handicapped-friendly Orlando is?

Yes, yes and yes. One nice thing about being a tourist mecca is that we’re very handicap-friendly and we’re about an hour south of The Villages. The Villages are a giant retirement community. People come down in hordes to peruse downtown Winter Park and the local gardens, restaurants, etc.

How walkable is Orlando? Is there a good public transit system?

Certain areas of Orlando are walkable and we have a few really great bike paths, but overall, it’s a city where a car is kind of required. We do have a SunRail that runs through the major areas of town. It closes early and it’s not open on holidays or weekends, which is disappointing and sort of counterintuitive.

This is one of the reasons I love Orlando. Orlando is amazingly diverse and incredibly welcoming. After the Pulse shooting, the rest of the world saw just how diverse and supportive we are here in Orlando, and that goes beyond sexual orientation. We also have large Hispanic, Black, and Asian populations and several religions. Orlando is incredibly diverse.

A fancy cup of coffee costs $5-$6; the best coffee in town can be found at Lineage. A good cocktail costs about $12 –and Orlando’s cocktail scene is insanely good.

What are your absolute favorite things about Orlando?

My absolute favorite thing about Orlando is that whatever you want to do, there’s a place that does it. I love the Asian food in Colonial Town. I love the amateur wrestling at The Mayhem on Mills, the cookies at Gideons, the cool bright clear days at the theme parks (which always come when the tourists are at home), the craft cocktail and music scene at Will’s Pub.

Most cities have a ‘catch’ – San Francisco has an insane cost of living, LA has terrible traffic, NYC has garbage bags lining the sidewalk. What’s the ‘catch’ with Orlando?

It’s stupid hot and muggy here. There are only about four months of the year you want to be outside – or can be. Wages also are pretty low but we have no state income tax, so it’s a tradeoff, I guess!