In the wake of unspeakable tragedy, Orlando’s LGBTQ community drew on collaboration and resilience to rebuild. 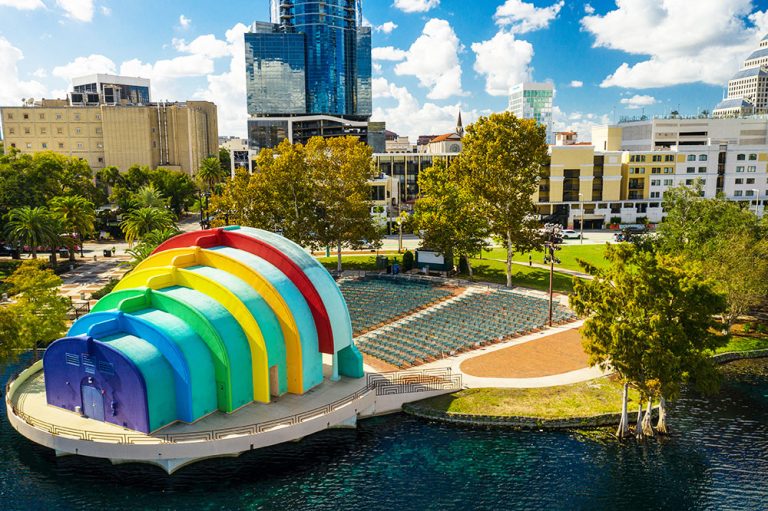 Southern Pride is our monthly column exploring and celebrating LGBTQ culture in Southern cities. This month we’re heading to the Sunshine State to check out the scene in Orlando.

Orlando’s identity has always been synonymous with one thing: Disney. The mere mention of the city’s name conjures images of roller coaster rides and live versions of Mickey, Goofy and an array of Disney princesses. What wasn’t top of mind was Orlando’s long-standing reputation as being a diverse, inclusive and welcoming city for the LGBTQ community.

It took a horrific tragedy to shine a national spotlight on Orlando’s LGBTQ community. On June 12, 2016, all eyes were on Orlando when an armed man entered Pulse, a popular gay night club, and killed 49 people. More than 50 others were wounded.

The Pulse tragedy sent shockwaves around the world. In the aftermath, the true heart of Orlando was revealed: this is a city whose residents, government and organizational leaders showed no hesitation in standing by, supporting and protecting their LGBTQ+ members. Suddenly, in the nation’s eyes, Orlando was more than a place for families to visit on vacation. It was a town where LGBTQ individuals and families could thrive.

Now, almost four and a half years later, Orlando is recognized as a desirable Southern city for LGBTQ individuals looking for a place to live and raise their families. If you’re looking to relocate and have your eye on the Sunshine State, the following are just some of the many reasons you should consider moving to Orlando.

Orlando is an Oasis

Carlos Carbonell is the CEO of Echo and a Latino, LGBT and tech community leader living in Orlando. “This area is still the bible belt,â€ he says. “It’s a bible belt within a bible belt because it is located in the center of the state, which tends to be pretty conservative. Orlando is an island of blue in the sea of red so, we get all of the people from surrounding towns moving here…and have a fairly sizable LGBTQ community because of that.”

For those longing to move to the Sunshine State, Orlando is an oasis. Surrounded by less-inclusive cities, LGBTQ+ individuals can enjoy the perks of living in Florida – think sunshine, fast access to miles of white sand beaches, and a vibrant nightlife – without having to deal with homophobic attitudes.

A Vibrant and Fun Community

While queer individuals and families move to Orlando from the nearby surrounding areas, Disney World and the University of Central Florida (UCF) are a huge draw for people living out of state.

“A lot of people come here for the  college program, which is extremely successful,â€ explains Carbonell. “Students come here and fall in love with the vibe of the city. If they happen to be queer, it’s immediately known that it is a welcoming city and there’s no way they are going to go back to wherever they are from.”

With a large, thriving LGBTQ+ community, the city of Orlando always has something fun going on to bring people together. From weekly festivals that celebrate the arts, culture, food and booze to its epic nightlife scene, locals have a hard time picking and choosing what to do. Some would say that the party never ends in this Central Florida city, which isn’t a bad thing if you love live music, dance clubs, comedy, carnivals and theme parks.

Today the remains of the Pulse night club still stand as a memorial to those who lost their lives. While it is currently surrounded by a wall covered in photos depicting the LGBTQ community, the onePULSE Foundation recently announced a design for the official Pulse memorial and museum which will include a reflecting pool, 49 trees surrounding the remains of the club and a museum that will be located a half-mile away.

onePULSE Foundation is just one of the many LGBTQ resources that exist in Orlando. According to Jennifer Foster, executive director of One Orlando Alliance, prior to the Pulse tragedy, the city’s LGBTQ community organizations were disconnected and worked separately.

“There was so much chaos going on after the tragedy that … especially in the LGBT community, everyone wanted to do something, but nobody really knew what to do or how,â€ she explains. “In cases like that everybody just goes off in their different directions.â€ This led to the inception of One Orlando Alliance, which is a now a coalition of LGBTQ+ organizations in Orlando.

The need for an immediate and organized approach to providing support right after the Pulse shootings led Foster and Carbonell to identify and bring together all of the city’s LGBTQ organizational leaders. Foster says, “On the 16th, we convened our first meeting. Eighteen organizational leaders attended. The sole purpose was to get everybody there and collaborate.”

Today, the Orlando Alliance coalition consists of an impressive 35 organizations that all serve the LGBTQ+ community. New individuals moving to the area have no shortage of places to go where they can find help and support connecting with the queer community. And finding the correct resource is as simple as visiting the One Orlando Alliance website and perusing the directory.

Orlando’s LGBTQ members are proud of their local government and many city officials, especially Mayor Buddy Dyer who was immediately welcoming and supportive of the LGBTQ community when he was elected in 2003.

Carbonell says, “When Mayor Dyer was elected … it felt like the pendulum swung to our favor, even back then. He has been a really big figure of support, and has played a large role in our community feeling welcome.”

The city has had a Human Rights Campaign’s Municipality Equality Index (MEI) score of 100 for four years and has a long list of policies, ordinances and initiatives that it has established to support the local LGBTQ community. Queer individuals moving to Orlando enjoy knowing that the city’s LGBT+ organizations and members of the local government work together to create a safe and inclusive environment for all.

There are a multitude of reasons why moving to Orlando is tempting. Year-round sunshine and warm weather, an emerging tech industry, entertainment job opportunities and miles and miles of white sandy beaches are just a few. But for members of the LGBTQ+ community here, Orlando’s dedication to their needs and safety makes the city a sweet safe haven, as well as a perfect place to call home.