Things to Do in Ames, IA 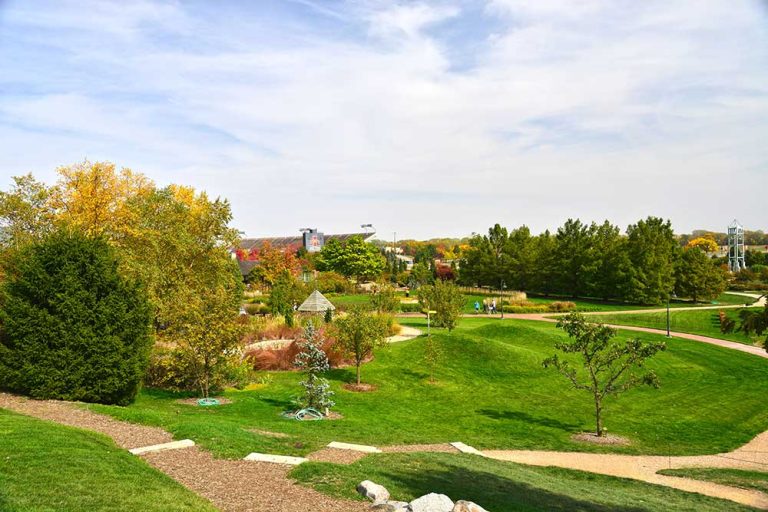 Ames / Courtesy of SD Dirk under a CC 2.0 license.

Ames is largely a college town, so there are numerous restaurants, night spots and attractions to keep both residents and visitors busy. Here are some choices:

A quaint diner by day and a bar/social spot by night is Café Beaudelaire, located in the Campustown district near Iowa State University in the heart of Ames. The eatery specializes in Brazilian-based fare such as pao de queijo, feijoadas and Portuguese omelets, plus the café is known for its Long Island ice teas.

Why Ames Is One of the Best Places to Live in the U.S.

Iowa’s only museum with a decorative arts collection is Brunnier Art Museum, founded in 1975 and situated in the Iowa State Center. The Brunnier collection showcases décor items such as ceramics, dolls, enameled metals, glass, ivory and jade along with carpets, furniture, lacquered objects, sculptures, silver, textiles and wood.

Ames Public Library is a Carnegie library founded in 1904, and the long-standing building on Douglas Avenue welcomes more than 300,000 visitors a year. Voters in 2011 approved a $20 million bond issue to expand and renovate the library, and each year Ames Public Library lends more than 1 million items.

Party at the M

One of the top nightclubs in Ames is the Maintenance Shop, which hosts 60 concerts a year along with comedy shows, open mic nights and theater performances. Located in the Iowa State University Memorial Union, the M-Shop is also open weekday afternoons as a place to hang out.

Ames: One of the 10 Best Cities for Singles

Root for the Cyclones

The Iowa State Cyclones football team competes in the NCAA Division I Big 12 Conference and plays their home games at Jack Trice Stadium, with a capacity of 61,500. ISU fans are known for their tailgating parties, arriving hours before the Cyclones kickoff to grill bratwurst, pork loin, hamburgers and hotdogs.

Ames Figure Skating Club provides a number of recreational and professional-level skating opportunities, including a Learn to Skate Program. The club schedules an annual Spring Ice Show where young to adult skaters can perform their best moves, and each summer the club hosts the figure skating portion of the Iowa Games competition.

About 75 stores such as JC Penney, Kohl’s and TJ Maxx are available to shoppers at North Grand Mall, a one-story complex that opened in 1971. A number of renovations have occurred throughout the years to help keep the 340,000-square-foot Ames shopping center up to date.

Immediately south of Jack Trice Stadium on the Iowa State University campus is Reiman Gardens, a year-round attraction that is one of the top visited sites in Central Iowa. Open seven days a week, Reiman has a dozen distinct garden areas, an indoor conservatory and an indoor butterfly house.