This Midwest state is a leader in harnessing wind for electricity and an innovator in protecting natural resources. 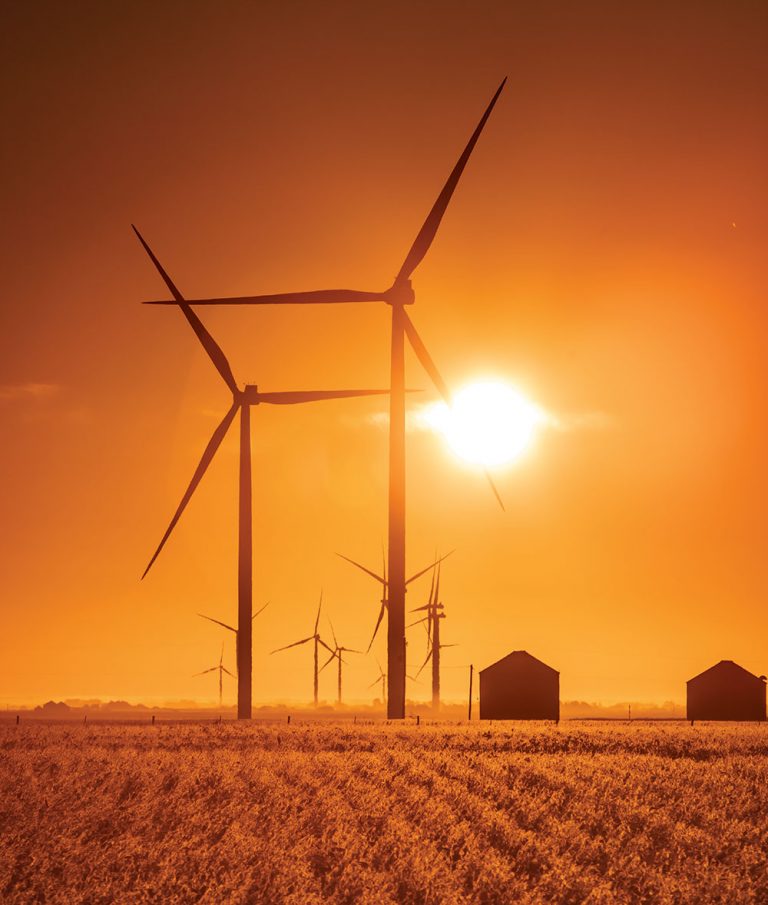 While it might seem like the needs of fast-growing companies and the desire to protect the Earth’s ecosystem do not always align in some areas, Iowa does business differently. Here, protecting the planet is woven into the hearts of people who have, for generations, depended on the Earth to make a living.

This understanding has helped drive innovation of green energy in Iowa, boosting Iowa to be the top renewable energy producer in the country.

“We can take advantage of Iowa’s natural abundance – wind and corn, in this case – and be able to use those raw materials for energy production,” says Brian Selinger, Iowa Energy Office team lead for the Iowa Economic Development Authority (IEDA). “We’re so good at being exporters of commodities, we can look at natural resources the same way. Renewable energy can be a resource for other states that need that access to power.”

Iowa generates more electricity from wind than any other state as a percentage of total energy (57%), according to the Energy Information Administration, which is a major reason why companies like Google, Facebook and Microsoft have chosen to build their energy-intensive data centers here. It’s not just companies who look to Iowa for energy, though. Other states do, as well.

“Iowa is invested in wind energy, and we have 23% fewer power outages. Rates are 13% lower than the national average. It’s hard
to argue with those stats, and it’s one of the top reasons
we’ve received so much buy-in from our communities.”

“We’re already serving as a power generator to other states, most of the regions from the Rockies eastward,” says IEDA research analyst Matt Kodis.

Creating green energy alternatives is lucrative for the state, as protecting and preserving natural resources helps ensure legacy businesses like farming also have a future. Iowa sees tremendous potential in carbon sequestration, which plays to its legacy of innovation in renewable energy and its deep roots in agriculture.

Gov. Kim Reynolds created a Carbon Sequestration Task Force that includes government, academic and business representatives from the state’s energy and agriculture sectors who are tasked with exploring how to capture carbon and the opportunities it presents for further economic development in the state.

“(The task force) was born from the governor’s economic recovery plan to bounce back from (the impacts of) COVID-19,” Selinger says. “That strategy warped into something way more bold and proactive.”

The task force will look to Iowa’s agricultural heritage as a means to build its future. “How can we capture carbon emissions? Can those captured emissions help replenish soil or plant more trees? Can we further build on renewable energy strengths? How does the environment win? All those things can come from this,” Selinger says.

Smaller cities are following suit and reaping the benefits. The Winneshiek Energy District, which emerged in 2010, was one of the first such nonprofits in the state formed to help municipal and corporate leaders identify green energy techniques. Partnering with power companies like Alliant Energy, communities keep the conversations moving forward.

Sometimes this progress arrives on the heels of disaster. After terrible flooding wreaked havoc across much of the state in 2008, new initiatives emerged to reduce flood risk and improve water quality. Thanks in part to a $97 million federal grant, the Iowa Watershed Approach has been transforming Iowa’s watersheds into flood-resilient spaces that double as recreational facilities.

The Iowa Energy Plan is a national model for sustainability and innovation. The plan’s motto is “Collaborate locally. Grow sustainably. Lead nationally.” Its main goal is to reaffirm Iowa’s energy leadership in the future. A key initiative is funding more research and development to keep Iowa at the forefront of energy innovation. Officials say the next step is implementing the plan through the work of dedicated individuals, municipalities, universities, businesses, nonprofits and energy organizations and associations.

In Dubuque, for example, more than 4,500 feet of Bee Branch Watershed was excavated, reconstructed and restored. This impacted the lives of people in 1,150 homes that were constantly flooding and creating unsafe Energized IOWA living conditions, and it spurred other economic development around it.

From solar units and rain gardens to electric vehicles, permeable pavement and even capturing wastewater and food scraps to turn back into usable assets, Iowans are leading the way with green energy.

3 Reasons Why You Should Do Business in Iowa

A central location is just one of the key advantages companies gain when relocating here.