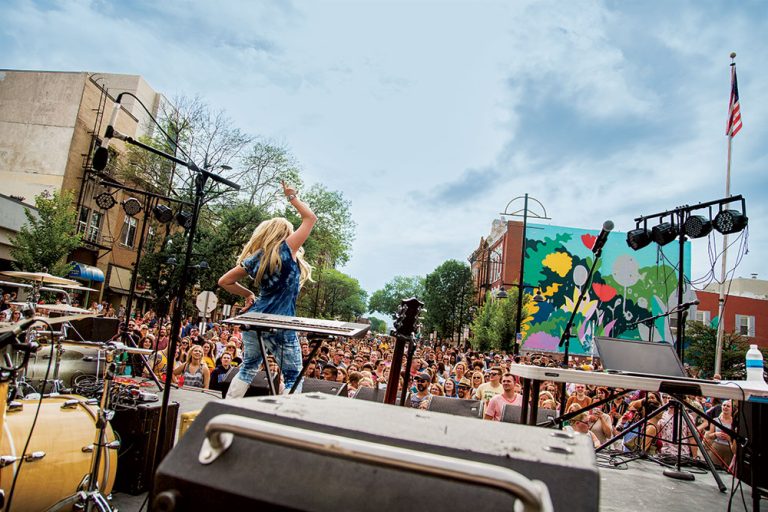 Iowa City’s high quality-of-life is a top factor in making it the second-fastest growing city in the state, but when that gets interesting is drilling down to what that means exactly to those who love it here.

Bobby and Kayla Thompson settled in Iowa City with their three children and opened Thompson & Co. Salon and Parlor downtown in 2015.

“What we love about Iowa City is the community,â€ says Bobby Thompson. “Whether it’s showing the Hawkeye pride on a game day or coming together for a local cause, it’s a very strong community. We are a melting pot of people from all over the place who come together and call this place home.â€

Iowa City is ranked fourth on Livability’s 2018 list of the Best Places to Live, and going with that number, there are four topics that seem to come up most often when people talk about what distinguishes this place among others: books, bikes, brews and block parties.

“We are the most unique community in the state,â€ says Betsy Potter, Iowa City Downtown District director of operations. “The Iowa City area is growing at unmatched numbers, welcoming community members from all over the world. Our culinary and arts and culture scenes rival those of much larger communities while offering a smaller-town feel.â€

A Land for Literature Lovers

Books and literature figure heavily into the arts scene here, and Iowa City was the third among fewer than 30 cities worldwide to be designated a “City of Literatureâ€ by UNESCO – the United Nations Educational, Scientific and Cultural Organization. The city also is home to the University of Iowa, which hosts the Iowa Writers’ Workshop, which offers a prestigious two-year Master of Fine Arts residency program and a summer program.

Downtown’s Iowa Avenue Literary Walk is an outdoor art exhibition featuring bronze-relief panels in the sidewalk inscribed with the words of 49 writers who have ties to the Hawkeye state. The panels are connected by quotations about books and writing that are also stamped into the sidewalk.

Each autumn, visitors from throughout the world come to the Iowa City Book Festival to celebrate books and writing through dozens of panels, author readings and other events. The week-long festival celebrates its 10th year in 2018, just as the city celebrates the 10th year of the UNESCO City of Literature designation.

“I find Iowa City to be a cultural Mecca,â€ says Andre’ Wright, owner-creator of Born Leaders United clothing brand, and a staff member with the Iowa City Area Development Group. “Coupled with it being a university town with a hip live music and arts scene, Iowa City is the destination if you are trying to build a life in Iowa.â€

In Iowa City, even sports events give a nod to the literary world. In 2018, the popular annual RAGBRAI bike race made its first overnight stop here in 42 years with a theme: “Book it to Iowa City,â€ in recognition of the city’s UNESCO City of Literature designation. The more than 12,000 riders and thousands of visitors who descended on the city for the summer event were treated to a block party-style celebration complete with entertainment, games and food from local restaurants.

Other events also highlight Iowa City as a cyclists’ town. It’s home to the three-day Jingle Cross Cyclo-Cross Festival, which in 2018 was chosen for the third time as host to the Telenet UCI Cyclo-Cross World Cup as the second leg of this nine-race global Cyclo-Cross series. It’s the largest Cyclo-Cross event in North America and features some of the world’s best bike racers. Iowa City was voted the Best UCI World Cup event out of the nine World Cup competitions hosted throughout the globe. Thousands of racers and spectators come for the annual event, which also includes entertainment for all ages.

There are thousands of miles of unpaved bike trails throughout the region and state, and Iowa City has several bike shops and popular trails. Now in the spotlight as a destination for cyclists, local craft brew routes are emerging throughout the area.

Speaking of beer, notable breweries in the area include Big Grove Brewery in Iowa City and Solon, Backpocket Brewing and ReUnion Brewery in Coralville, Millstream Brewing in Amana and Kalona Brewing Company in Kalona.

Bike racing fans aren’t the only ones getting in on block party fun. Iowa City’s breakout event in 2017 was its Downtown Block Party, which drew an estimated 30,000 people. In 2018, about 42,000 people attended the downtown event, which features all-ages events and activities. Potter says the Block Party’s most popular events include a locally curated fashion show, dueling pianos, a DJ competition, sand volleyball and a Silent Disco event that involves participants dancing to tunes on wireless headphones.

“Iowa City celebrates a healthy and vibrant night economy, and this event was intended to highlight the arts and culture, culinary and entertainment options,â€ says Potter.

The city hosts many other festivals and events, including Taste of Iowa City, Northside Oktoberfest and a Summer of the Arts program that offers the Friday Night Concert Series, the Iowa Arts Festival, the Iowa Soul Festival, the Iowa City Jazz Festival and a free movie series.

“These premier events shine a light on all the great benefits Iowa City has to offer,â€ says Wright, who lives in Iowa City with his wife, Allison, and their three children. “The whole community gets to be involved. These events add to the everyday experience with making friends, networking, eating great food and learning new things.