Iowa City: The Greatest Small City for the Arts

Is Iowa City a great city for the arts? No. It's the greatest. 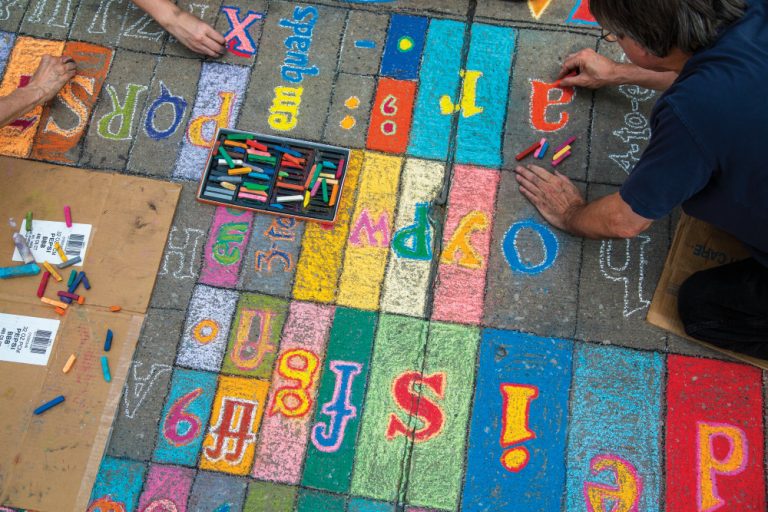 It might hit you when you’re browsing the shelves at Prairie Lights and an employee casually mentions how many of the books were written in the cafe upstairs. Or when you’re soaking in an intimate performance by your favorite band at the historic Englert Theatre. Or seeing an edgy indie movie at FilmScene. Or watching half the city dancing in the street during the annual Downtown Block Party. Or when you look down at the sidewalk and realize you’re standing on a poem carved into the concrete.

But at some point, everyone who visits Iowa City will be struck by the thought, “Wow, this is a really great city for the arts.”

Ahem. Make that “The Greatest.â€

A group of local arts organizations are banding together on a campaign to make Iowa City known as “The Greatest Small City for the Artsâ€ – and they’re gaining momentum fast.

It all started the way many projects in Iowa City do: A big dream fueled by collaboration and creativity to become something much, much bigger. FilmScene, Iowa City’s nonprofit independent theater, was looking to raise funds to move into their new, state-of-the-art, three- screen building and restore their historic theater downtown. As it happens, the city’s beloved Englert Theatre was also in the beginning stages of a capital campaign to fund a renovation.

“We were talking about building a fundraising effort at the same time the Englert was also having those conversations,â€ says Joe Tiefenthaler, FilmScene’s former executive director. In true Iowa City fashion, “We thought, ‘What would it look like if we did the fundraising together?’â€

The answer: A campaign called “Strengthen Grow Evolve,â€ which combines the interests, goals and fundraising power of two of Iowa City’s most iconic arts organizations to update facilities, increase engagement and community outreach, and expand current programming and offerings.

But as the groups met and strategized, they realized their ambitions were grander than they’d originally planned.

Joe remembers a turning point: “One of our board members said, ‘It feels like what we’re trying to do here is something bigger. We’re trying to build the greatest small city for the arts.”

Turns out that was exactly what they were doing.

“Strengthen Grow Evolve is just the first step in building ‘The Greatest Small City for the Arts,’â€ says Katie Roche, development director for Englert Theatre. “Fortifying two of the area’s largest and most influential nonprofit arts organizations is a necessary first step, but how we work together to convene the cultural trust of our community is our most important task.”

The superlative might seem lofty, but anyone who’s been to Iowa City knows it’s a fitting moniker for what is not just a famous haven for writers (and a UNESCO City of Literature), but a place where artists of all kinds have found inspiration and space to create, and residents are enjoying the fruits of their labors.

“The sheer number of opportunities to engage in the arts and culture in this community is amazing,â€ says Andrew Sherburne, FilmScene’s interim executive director. “There’s an element of art in just about everything we do here.”

“Iowa City is a great place to make things. Could be a book. Could be your album. Could be your new business. It’s a good place to incubate. If the thing fails, it’s not like you’ve lost everything. You can go do the next better project.”

“I truly believe art is the thing that gives us energy when times are tough or when we want to celebrate,â€ says Tiefenthaler.

“When we experience live music or a tremendous piece of cinema, we laugh together, we cry together, and those shared experiences make all of us here feel like we’re part of a real community.”