Skip to content
Home > IA > Waterloo > Love Where You Live > Living the Dream: We Opened a Themepark

Living the Dream: We Opened a Themepark 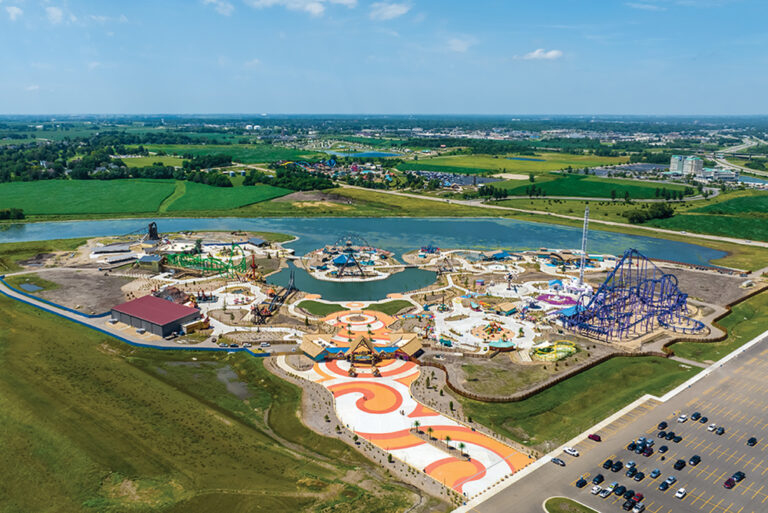 Livability sat down with Eric Bertch, co-owner of Lost Island Themepark, to discuss his family’s vision behind the new 90-acre attraction, which opened in June 2022.

Tell me about your family’s roots in the area.
My parents both grew up in the community outside of Waterloo. They went to school at Don Bosco [a Catholic high school in Gilbertville] and were high school sweethearts there. My father started Bertch Cabinet Manufacturing in his parents’ barn, building furniture before eventually building some industrial buildings on the outskirts of Waterloo. [At its peak,] almost 1,500 people were employed there. The success of the cabinet company is what allowed them to have the capital to reinvest in this community.

Why the move from manufacturing to a theme park?
Lost Island Water Park [which opened in 2001] was the first item that put us on the path to family entertainment. That was hatched by my dad and mother’s father. We were on a family vacation to Wisconsin Dells, and the two of them saw how much fun our family was having. We started on the path of creating this water park as a community amenity, bringing a world-class experience like that to our hometown, so people didn’t need a passport or to spend hundreds of dollars in airfare to have this experience.

What’s special about Lost Island Themepark?
We broke ground in 2019 and opened on June 18, 2022. It’s a theme park, not an amusement park. An amusement park is just focused on the rides, but a theme park is about the overall experience. That’s what sets us apart from competitors; what they don’t have is a completely unique storyline across all attractions. [For the water park,] we added new attractions every other year until 2015. The theme park is planning to follow that same path with six to eight new attractions, festivals and live music.

If you’d like to learn more about the Cedar Valley area, check out the latest edition of Livability: Cedar Valley, Iowa.

Tyson Foods’ pork plant in Waterloo provides a place for you to grow your career and expand your possibilities.