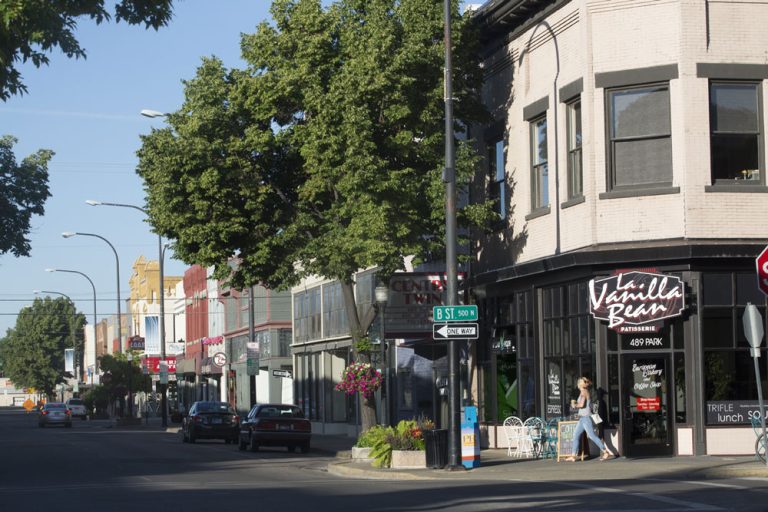 There is always room for improvement, and Idaho Falls takes that saying to heart.

Several key infrastructure projects are underway these days throughout the community. One of the largest is a road upgrade that connects Idaho Falls and Ammon, where the two cities meet near Grand Teton Mall. Hitt Road at the intersection of 17th Street is being enhanced, with construction started in mid-2017.

“Hitt Road at 17th Street is the busiest traffic area in our region, so this construction project is sponsored jointly by the two cities to widen 17th and add left-turn lanes to all approaches,” says Dana Briggs, economic development coordinator for the city of Idaho Falls. “Also, right-turn lanes will be added for the north, south and eastbound approaches at that intersection, and there will be median improvements. The upgrades are vital and will very much improve traffic flow.”

Plans for The Broadway

In the downtown portion of Idaho Falls, a proposed $10 million project called The Broadway is scheduled to be built overlooking the Snake River. That initiative will feature the construction of two buildings – a one-story and a three-story – with a plaza in between that will serve as a community gathering area for concerts, a winter ice rink and more.

“We are expecting a fall 2017 groundbreaking for construction of The Broadway, which will be located at the corner of Broadway and Memorial Drive where many people enter the downtown district,” Briggs says. “The one-story building will feature retail space, while the three-story building will have retail on the first floor, business offices on the second floor and residential on the third floor.”

Check out the best neighborhoods in Idaho Falls

Briggs adds that the residential options at The Broadway will be important, with Idaho Falls looking to develop more choices downtown to accommodate everyone from millennials to retirees.

“Our area’s largest employer – Idaho National Laboratory – hires about 500 interns every year, and downtown rental residences would be ideal for these young people,” she says. “The Broadway is a project that many people are anticipating.”

Briggs points out that another downtown infrastructure project involves the renovation of the Bonneville Hotel, a landmark building constructed in 1927. The hotel today is in need of renovations, and Boise developer The Housing Company is working to secure federal tax credits to help with the estimated $10 million overhaul.

“With tax credits and various other money raised, it looks like The Housing Company will begin tackling the Bonneville Hotel reconstruction beginning in 2018,” Briggs says. “They will keep the historic exterior façade but will completely redo the inside.”

When completed, the Bonneville will feature retail stores and restaurants on the bottom floor, and residential units will be on the upper floors. The residential spaces will include studio, one bedroom and two bedroom units, and there are also plans to include a roof deck at the second level that will be accessible to residents and have a restaurant.

“This is a key project for our continuing downtown development,” Briggs says. “The nostalgic value of the 90-year-old hotel makes it fun for this renovation to be happening in our community.”

“There are already more than 30 businesses on site and also being planned is a shopping center, and all acreage is situated near the Snake River and our city’s 6-mile River Walk trail,” Briggs says. “People can live in apartments and townhomes in Snake River Landing, as well as work in offices and enjoy the restaurant and retail choices, and there is even Stevens-Henager College on site. In addition, the Landing is the future location for our city’s Idaho Falls Events Center, and other entertainment venues are being planned.”