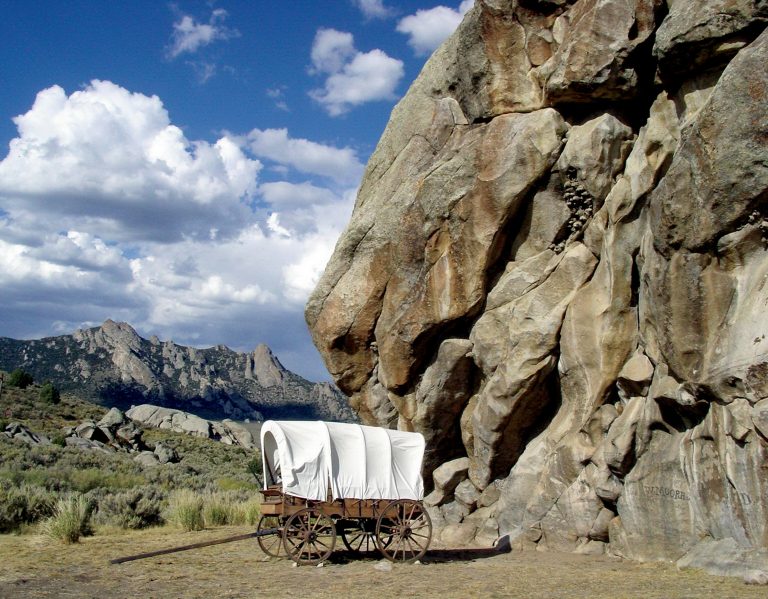 Twin Falls / Courtesy of Register Rock at City of Rocks

Plenty of interesting history lessons await in the Magic Valley, whether they’re front and center at a museum or tucked away amid ancient rocks.

For example, Minidoka National Historic Site was one of 10 internment camps used during World War II to confine Japanese-Americans living along the U.S. West Coast. After the bombing of Pearl Harbor in 1941, the ensuing fear and war hysteria led to the mass incarceration of about 110,000 Japanese-Americans. Another 10,000 children were born at the camps during the war.

“Most of those incarcerated at Minidoka were Japanese-Americans living in Alaska, Washington and Oregon,” says Hanako Wakatsuki, chief of interpretation and education at Minidoka National Historic Site. “About 13,000 people came through Minidoka and the peak population was 9,400, so Minidoka fluctuated between the fifth- and seventh-largest city in Idaho at that time, depending on occupancy.”

Wakatsuki says the Japanese-Americans built their own community at Minidoka, even constructing 14 baseball fields for recreation. They also began to farm an agricultural area and helped to irrigate part of the Magic Valley.

“Today, Minidoka National Historic Site spans about 400 acres and has several original buildings still standing, including a fire station, mess hall, barracks and a warehouse that served as an automotive repair shop,” she says. “There is a 1.6-mile walking trail with exhibits along the path, and a visitor center offers guided tours. It is a very interesting site.”

The entire city of Oakley is on the National Register of Historic Places, thanks in large part to Latter Day Saints settlers sent by Brigham Young in the 1880s to establish “the very Mormon town.” Attractions today in Oakley include the circa-1907 Howell Opera House and an annual Historic Home Tour that draws people here from Boise to Pocatello.

Also in the Magic Valley are many tunnels built to better manage water and drain flooded farmland when area canals were first constructed. Twin Falls today has underground passages with names like Klaar Tunnel and 48 others that form a 21.6-mile system.

Other historical attractions include visible Oregon Trail wagon wheel ruts at Milner Historic Recreation Area 9 miles west of Burley, while Register Rock at City of Rocks National Reserve features many inscribed names of pioneers who passed along the California Trail from 1843-1882. At the historic Rock Creek Station and Stricker Homesite south of Hansen, visitors can tour a circa-1900 Victorian mansion, log store and two dirt cellars carved into basalt bedrock – one of which was used as a jail.

Many more attractions are highlighted at museums throughout the Magic Valley, including at Oakley Valley Historical Museum and the Idaho Farm & Ranch Museum in Jerome. The Twin Falls County Historical Society Museum in Filer is housed in the old Curry Union School, built in 1914 and used to educate elementary school students until 1968.

The brick building is on the National Register of Historic Places, and on the grounds are a blacksmith shop, pioneer house and craft house.

“This museum sits on 2 beautiful acres, and many of our out-of-town visitors are motorists arriving off U.S. 93 and who haven’t been into Twin Falls yet,” says Laurie Warren, Twin Falls County Historical Society Museum administrator. “Our most visited attraction is a big building that has old vehicles stored in it, including ice wagons, a steam tractor and a 1940 fire truck. The fire truck is still used for parades and special occasions.”

Warren says the museum is beginning to receive grant money to enable the board and staff to do more things with the site.

“We are now open from noon-5 p.m. Tuesday through Saturday and have more exhibits planned for the future,” Warren says. “If you get a chance, stop in.”