Get the most bang for your buck in Illinois in one of these 5 spots. 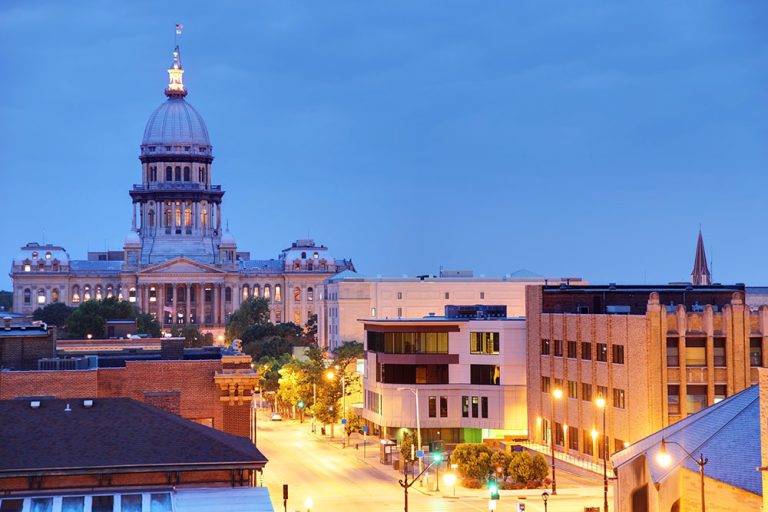 So when we selected the cities to appear on this list, we factored in more than where to get the cheapest mortgages. We included living costs, average annual income, attractions, quality of life and much more. All of which helped us determine the five best, low-cost Illinois cities that you’d love to live in.

Here are the 5 Most Affordable Cities in Illinois:

Ranked among the 10 Most Affordable Cities in the U.S. is Bloomington, where residents have a median household income of $60,836, and the average home price is about $150,000. The citizens of this city of 76,527 have conveniences like multiple college campuses, 44 parks, two hospitals and three interstates, and Bloomington is often linked with Normal, its neighboring city, which joins forces with Bloomington to promote regional economic development.

Beer Nuts are made in Bloomington, and interesting attractions include the Gridley-Light House where the city’s first millionaire, Asahel Gridley, lived in the 1870s. Nearly 40 percent of Bloomington residents are single, the median age is 38, and State Farm Insurance has been the largest employer for years.

The scenic city of DeKalb has a median population age of 32 years old and is home to Northern Illinois University, the city’s largest employer. The average value for houses in DeKalb is very reasonable at just under $150,000, while the median household income in this community is almost $50,000.

For residents that like a little more “upscaleâ€ quality of life, Naperville is among the wealthiest cities in the Midwest and also ranked among the nation’s safest cities. More than 72 percent of adult residents are college educated, and the median income for households is about $112,000, with nearly 92 percent of residents being homeowners.

Naperville, with a population of 142,143, is situated along the Illinois Technology and Research Corridor that features several high-tech companies such as AT&T Bell Laboratories, BP, Calamos, Ineos, Nicor Gas and Western Electric. Also adding to the community’s livability assets are eight college campuses, multiple shopping districts and 130 parks and sports complexes.

Billed as the capital of southern Illinois, the attractive city of Belleville features more than 15 parks and is designated a Tree City USA by the Arbor Day Foundation. About 35 percent of adult residents are college educated, the median household income is $52,233, and the average home price in Belleville is $100,000. With a population of 44,118, the city is also within close proximity to Scott Air Force Base.

Quality-of-life luxuries include three college campuses (most notably, Lindenwood University), a beautiful downtown public square, and the Belleville Philharmonic Society, which is the second oldest orchestra in America, having formed in 1866. The community hosts more than a dozen festivals each year, including Ale Fest and Art on the Square.

The state capital of Illinois is Springfield, which, as we previously mentioned, was the home of Abraham Lincoln from 1837 to1861. Community attractions include Abe’s presidential museum, his home and tomb, as well as beautiful Lake Springfield.

Contributing to Springfield’s quality of life are two interstates and a cultural community that is well represented by impressive venues such as Hoogland Center for the Arts and Springfield Theatre Centre. In addition, Springfield houses the largest amusement park in central Illinois – Knight’s Action Park and Caribbean Adventure.