In battery chemistry, The Joint Center of Energy Storage Research at Argonne National Laboratory is leading the way, aiming for new technologies to hold five times more energy than the existing standard at one-fifth the cost in five years. 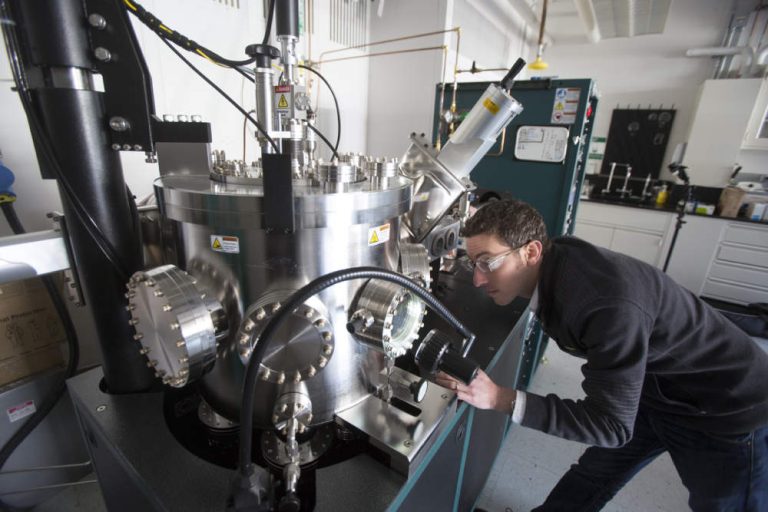 The next big advance in clean energy may well start with manipulation of wee subatomic particles in Illinois, where innovation and investment span wind power, biofuels and new battery technologies.

The Joint Center of Energy Storage Research (JCESR) at Argonne National Laboratory has a bold goal: developing new battery technologies to hold five times more energy than the existing lithium ion standard at one-fifth the cost in five years. Argonne won a $120 million, five-year grant from the U.S. Department of Energy to establish the battery research center in late 2012.

Likewise, Illinois is a U.S. leader in wind power production and related manufacturing, as well as biomass production and research, diversifying the state’s new energy economy and creating supply-chain opportunities across multiple sectors.

In its first year, the JCESR battery hub at Argonne went back to the basics. Using particle-scattering equipment, researchers evaluated how subatomic particles move to open up possibilities for new materials, such as sulfur and magnesium, and new approaches, such as storing energy in liquids.

“We wanted to start the basic science and collect new data so we have enough to see probabilities,” says JCESR Deputy Director Jeff Chamberlain. “We will begin to see which technologies will be the most productive to pursue for both transportation and the grid.

Magnesium is attractive because its ions have two easily accessible electrons; lithium ions have only one. In theory, atoms with more electrons should store more energy, Chamberlain says.

Manipulation of such tiny bits of matter has large implications for U.S. energy and economic security. Though most breakthroughs in lithium ion batteries occurred in the U.S., 90 percent of the manufacturing for the $13 billion industry takes place overseas.

“If and when battery tech improves, it would be really nice for the value chain to be in the U.S.,” Chamberlain says.

From Ag to Alternative Fuels

Battery chemistry isn’t the only clean energy play in Illinois. As a top grain belt state, Illinois is a leader in alternative fuel production and research. It already leads the country in ethanol production – about 678 million gallons from 274 million bushels of corn.

BioFuels Manufacturers of Illinois is building a 60 million gallon per year biodiesel plant in Peoria County that will use multiple soy oil, animal fats and other vegetable oils. The company also is developing Pennycress, an advanced energy crop, to produce vegetable oil for conversion into biodiesel. Other new projects include a $4.5 million biodiesel plant in Lena on Adkins Energy’s existing campus, also home to an existing ethanol plant. The company will use corn oil separated at the ethanol facility as biodiesel feedstock.

Wind is another winner. With installed capacity of nearly 3,600 megawatts, Illinois ranks fourth on that measure and fourth in number of utility-scale turbines. In 2011, Illinois led the nation in number of new turbines installed with 404 and ranked second for most new wind energy capacity installed, with 693 megawatts. Another 832 megawatts came online in 2013.

The state ranks fourth for the number wind-related employment, which topped 13,000 direct and indirect jobs in 2012, and is home to three dozen wind-related manufacturing facilities. Broadwind Energy is among them; the company fabricates specialty weldments for industries that include wind.

A new bachelor’s degree in renewable energy at Western Illinois University with concentrations in wind, biofuel and policy/planning management gives students the foundation to work in this growing sector. In 2013, the program graduated its first four students in 2013 to a construction company, government, an energy company internship and graduate school, says Michele Aurand, the program director.

“Both wind and biofuel are quite popular, but biofuel is becoming more popular as time goes on,” she says.

Across the new energy landscape, Illinois is staking substantial claims. The battery hub at Argonne, for example, has 40 affiliations, including sector-leading companies, and expects to see startups spin off of its research.