How Illinois Is Powering the Future With Battery Technology 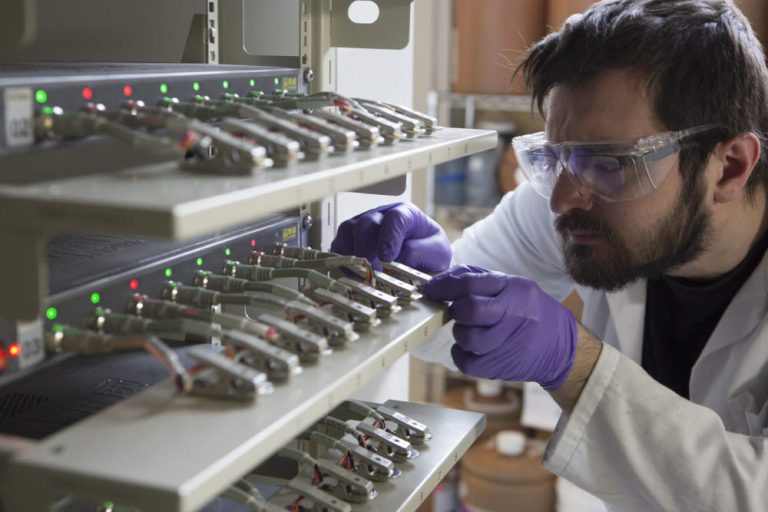 The batteries that make smart phones and similar devices possible are getting smaller, longer lasting and more powerful while the business opportunities they represent are growing larger than eve and Illinois is taking a leadership role in both trends. Companies such as Ampy, maker of the world’s first and smallest wearable motion charger; AllCell Technologies, whose innovative composite material improves battery safety and life; and SiNode Systems, which is developing advanced materials for the next generation of lithium-ion batteries, are putting Illinois on the fast track to commercializing the latest innovations. Illinois’ leadership position is strengthened by its unique resources, including two major federal laboratories – Fermi and Argonne – and by research being conducted at universities across the state.

That combination has created an ecosystem where innovation thrives, says Ethan Krupp, director of marketing and operations for Evanston-based Ampy.

“It’s a very welcoming and supportive place to start a company. Further, we’ve been able to collaborate, mentor and be mentored by other companies in the Chicago scene,” he says.

Other vital resources include the University of Chicago, 1871, the entrepreneurial hub for digital startups that is the flagship project of the Chicagoland Entrepreneurial Center, and the Chicago-based Clean Energy Trust (CET), a nonprofit that helps launch, fund, and grow early stage clean energy companies. The CET presents the Clean Energy Challenge, a business plan competition for clean energy startups. CET has helped launch companies such as AllCell Technologies and Ampy. The company created the Ampy Move, the world’s first and smallest wearable motion charger. Ampy Move can charge any smart phone or a USB powered device. “An hour of exercise gets you up to five hours of standby smart phone battery life and an hour of normal use. Think of it as a battery pack that charges itself from your motion,” says Krupp.

For AllCell, Illinois offers advantages that can’t be matched elsewhere, says Greg Albright, vice president of business development. “Illinois has a vibrant tech scene and a strong manufacturing base. Since we make large battery systems, we need complex software and engineering and suppliers that can form sheet metal, weld custom equipment, etc.,” he says. Other advantages include ongoing support from the state of Illinois through grant programs for upgrading facilities and participating in trade missions and a location in Chicago that provides global reach and quick access to customers and suppliers.

The selection of Argonne National Laboratory to host the Joint Center of Energy Storage Research, “the most advanced battery research group in the world,” increases the value of an Illinois location, says Albright. AllCell designs and manufactures lithium-ion battery packs for electric transportation and stationary applications, such as electric bikes, scooters and robots and to help power commercial buildings. AllCell’s technology incorporates a composite material the company calls “PCC”. This material keeps the batteries cool, which improves their safety and life. SiNode Systems is developing advanced materials for the energy storage market and is working to commercialize advanced materials that enable higher energy density and longer lasting, faster charging lithium-ion batteries.

“As consumers increasingly adopt mobile and wearable devices (the company) will provide the value-added materials to power the needs of the on-the-go consumer,” says Samir Mayekar, the company’s co-founder and CEO.

At Argonne National Laboratory, where lithium-ion battery technology was born, research is taking place to develop batteries that are smaller, lighter and longer lasting, says George Crabtree, director of the Joint Center for Energy Storage Research (JCESR). Lithium-ion batteries enabled the personal electronics revolution that changed the way society works. Now there are two more energy storage revolutions waiting to happen – inexpensive electric cars that are energy and environmentally friendly, and storage on the grid that decouples generation from demand and improves reliability, flexibility and resilience. JCESR, a consortium of 14 partner institutions and six funded collaborator organizations led by Argonne National Laboratory, has assembled the team and the tools to pursue the challenge of developing the next generation beyond lithium-ion batteries, says Crabtree.

“JCESR significantly strengthens the state’s research and development base, grows its innovation ecosystem and creates a platform for spinning out new companies,” says Crabtree.