Learn how a statewide network of incubators, institutions and innovators is driving the growth of tech startups in Illinois. 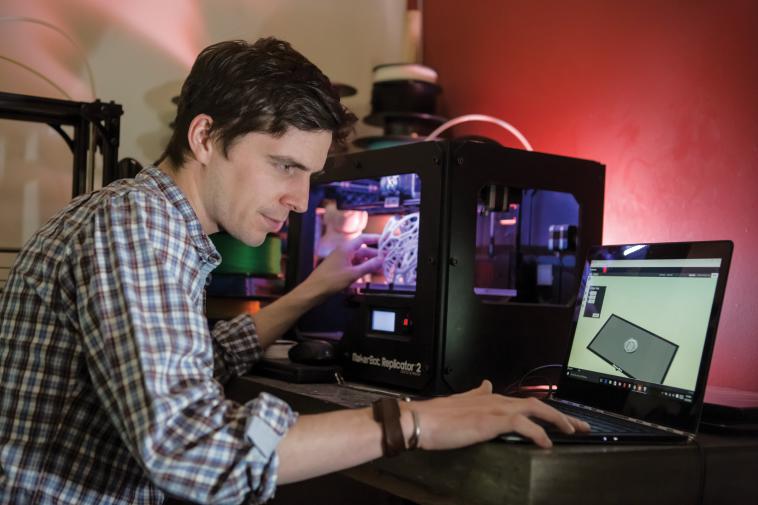 Inside a former screw manufacturing factory in Chicago’s West Loop neighborhood, engineers of all backgrounds are designing, making and testing inventions of the future. Entrepreneurs work in small teams throughout the 8,000-square-foot space, but interact often to share ideas, get feedback and help each other work through issues. “It is a very collaborative community,” says Bill Fienup, co-founder of Catalyze Chicago, a nonprofit incubator that provides resources, equipment and expertise for entrepreneurs developing physical products.

That is exactly the dynamic Fienup hoped to find when he left his engineering job at a product design and development company to make his own products. After a few months of working alone out of his apartment, he realized he needed more space, tools and support to get his ideas off the ground. He and a few others decided to create their own product development workspace with everything they needed: state-of-the-art tools including 3D printers, CNC and woodworking equipment, and a laser cutter, industry mentors and resources for networking with suppliers and investors.

“Our goal is to make it easy,” Fienup says.

Innovation is also sparked by access to a wealth of research assets that Illinois can offer.

The state hosts two federal laboratories – the Argonne National Laboratory in Lemont and Fermilab outside Batavia.

Housed at the National Center for Supercomputing Applications at the University of Illinois in Champaign-Urbana, the Blue Waters supercomputer applies data power at peak performance of more than 13 quadrillion calculations per second.

The center unites UI faculty, staff and students with collaborators from around the globe to research and make breakthroughs across the spectrum of scientific disciplines and help companies tackle data and computing challenges.

EIGERlab, a Rockford-based business incubator, recently became affiliated with Northern Illinois University (NIU). Part of the community for more than 10 years, the incubator provides new and early-stage companies with design engineering and rapid prototyping services and business expertise to help them develop, commercialize and market products and technologies. NIU’s affiliation with EIGERlab has allowed the incubator to boost its access to university resources and expertise and broaden its reach throughout northern Illinois.

“We are expanding our network and joining forces with entrepreneurship and innovation centers across the state and beyond,” says Rena Cotsones, NIU’s associate vice president for engagement and innovation partnerships.

EIGERlab is also teaming up with Roscoe-based 3D Platform to test and refine its 3D printers and develop materials to train students and businesses to use the technology. Over the years, the incubator has assisted hundreds of startups, including SockTABs, a past winner of EIGERlab’s Fast Pitch Competition that recently landed $50,000 in funding on ABC’s “Shark Tank.”

Participating in 1871’s Impact Engine accelerator helped Guard Llama founder Joe Parisi develop the idea for his security device – a Bluetooth-powered key fob that sends distress calls to emergency dispatchers when activated – and working with Catalyze Chicago helped bring his product to life. In about a year, Parisi was able to raise thousands of dollars from investors and develop a database of more than 2,000 customers – thanks to the support he has found in the state.

“As an entrepreneur, it makes all the difference because there is so much to learn in a short period of time,” Parisi says.