Learn what role a network of universities and medical centers in Illinois plays in the state's bioscience and biotechnology industry. 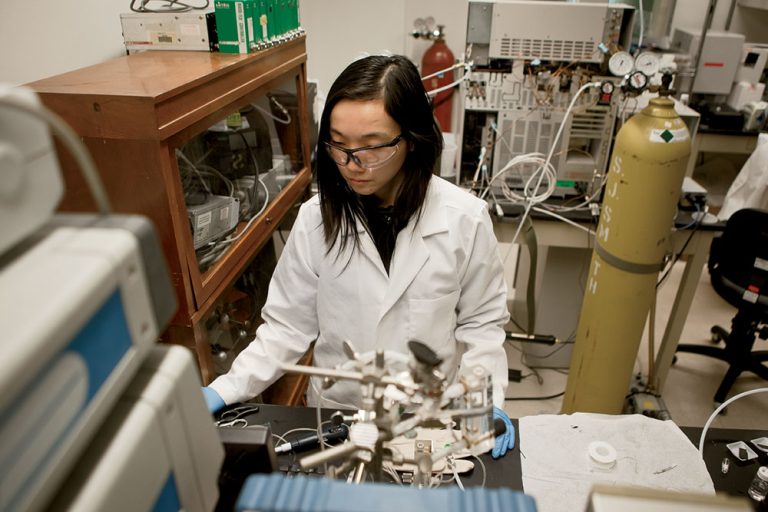 Illinois has a robust life sciences and biotech industry that numbers more than 3,500 companies and more than 80,000 direct jobs across a spectrum of sectors including pharmaceuticals, medical devices, human health and nutrition. The state is also a leader in bioscience research and development. Company-paid research in Illinois topped $11.1 billion in 2014, according to the national Science Foundation, fifth among states. Relative newcomers, such as pharmaceutical companies Vetter Pharma in Des Plains and Fresenius Kabi, join the ranks of the state’s key bioscience players like Abbott Laboratories, Astellas and Baxter Healthcare that have global reach and impact.

Abbott, based in Abbott Park, employs more than 94,000 people around the world who advance innovation in everything from pharmaceuticals to  nutrition to vascular and diabetes care in more than 150 countries.

A robust network of resources supports the biosciences and biotechnology industries, including technology parks, incubator space and specialty business accelerators, such as Chicago-based MATTER, a health care startup incubator. “We really are the crossroads of the United States and the world, so we have great assets — the most important being the concentration of academic medical research centers that we have,” says Warren Ribley, president and CEO of the Illinois Biotechnology Innovation Organization (iBio), an advocacy and education organization that promotes the biotechnology industry in Illinois.

iBio’s members include a number of major agricultural, bio-industrial, pharmaceutical and medical technology companies in the state. The organization recently changed its name to reflect the innovative research and product developments of its members. “Innovation is really at the core of what our companies are doing through their research and development of new therapeutic products, new devices and new diagnostic advances,” Ribley says. iBio works with startups and early-stage companies to help them gain access to capital, technical assistance, help in navigating the regulatory process and other business resources. iBio’s PROPEL Center offers new companies office and laboratory space, educational programs, networking and mentorship.

Another reason the state’s biotechnology sector continues to grow is the unfettered access to more than 200 hospitals, universities and nonprofit research institutions. Through its business incubator EnterpriseWorks, the University of Illinois at Urbana-Champaign has produced several innovative biotechnology startups, including PSYONIC, a company that uses 3D printing to develop advanced prosthetic hands.

“Illinois is ripe for science and biotech innovation because of the sheer amount of world-class resources available to students and business throughout the state,” says Aadeel Akhtar, PSYONIC CEO and co-founder. “With top universities in engineering and biomedical sciences, including the University of Illinois at Urbana-Champaign and Northwestern University, as well as top hospitals, such as the Rehabilitation Institute of Chicago, we’ve been able to rapidly prototype, test and iterate on our products.”

Akhtar says resources, such as EnterpriseWorks, the iVenture Accelerator program and the Technology Entrepreneurship Center at the University of Illinois, have been instrumental in helping the company develop its business model, acquire funding and provide access to mentors in design, engineering and business development.

Photonicare, a startup working on the development of a handheld imaging tool to more accurately diagnose middle ear infections, is also housed in the EnterpriseWorks incubator. “Having a large concentration of great hospitals and hospital systems so close by makes it really easy to collaborate. For instance, we have Carle Foundation Hospital here in Champaign and OSF Saint Francis Medical Center right next door in Peoria,” says Ryan Shelton, Photonicare CEO and co-founder.

Shelton says the lower cost of living and doing business also influenced his decision to start his business in Champaign. “The relative cost of living in Illinois and the Midwest, in general, is really meaningful from that perspective,” he says. “While we do have to spend a lot of money on clinical trials, clinical studies and hardware, we’re able to do this at a low cost of living and with lower operating expenses.” The state’s investment in a highly skilled workforce has also contributed to growth in the bioscience and biotechnology industries.

iBio’s EDUCATE Center, for example, works with schools to deliver industry-led science and math programs for teachers and students, and Photonicare has partnered with local high schools in an effort to engage engineering, math and science students. “We even have some touch points with grade schools,” Shelton says. “It’s been easy to integrate into the entire community. We definitely try to connect in as many places as possible because that can lead to future talent and recruitment.”