Illinois' sophisticated technology ecosystem makes the state a destination for the next generation of tech entrepreneurs. 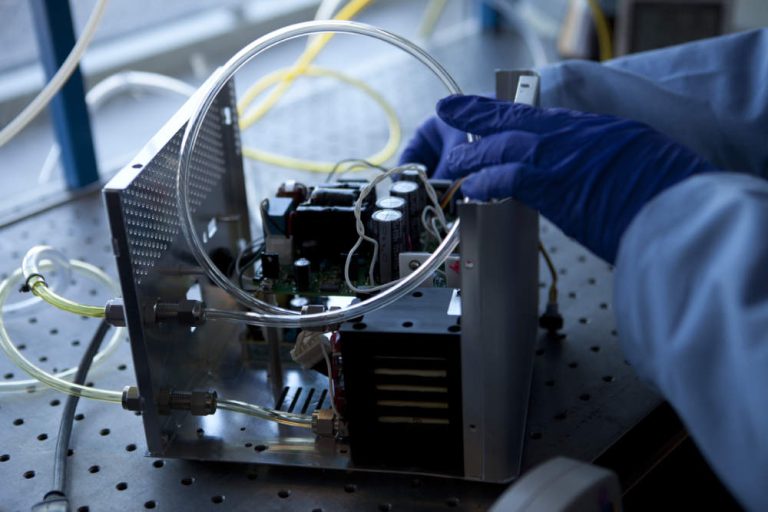 As the birthplace of technologies that include the cell phone, medical ultrasounds and the first web browser, Illinois has a long history of bringing the future to life. That tradition continues today, thanks to a sophisticated technology ecosystem that makes the state a destination for the next generation of tech entrepreneurs. Their breakthroughs are creating the jobs of the future and enhancing the quality of life for people around the globe, says Gary Eden, a professor of electrical engineering at University of Illinois at Urbana-Champaign and co-founder of EP Purification. The company has developed a clean-tech generator that produces ozone, which has uses as a powerful disinfectant and a variety of other applications.

“In our view, the future of the economy of Illinois and the well-being of its citizens are critically dependent on the introduction of new technologies,” Eden says. While attending a meeting of the National Academy of Engineering, Eden heard a startling statistic.

“A government estimate indicates that, over the last 50 years, new technology companies are responsible for fully half of the growth in the nation’s GDP. This, of course, is enormous and translates to a higher living standard for us all,” he says. “In our view, new technologies will provide the jobs of tomorrow.” EP Purification plans to expand its production capacity in Champaign-Urbana. Its ozone generators have been delivered to commercial laundries in Champaign and internationally to Singapore and South Korea for use in water treatment, food preservation and aquaculture, Eden says. The Illinois Department of Commerce & Economic Opportunity has sponsored the company’s participation in international exhibitions. As a result, “we are being swamped with orders for our ozone systems,” Eden says. “We are, frankly, overwhelmed by the response to our technology.”

Increasing the number of university-based tech startups is part of the state’s new strategic focus on making Illinois a top location for entrepreneurs. So is increasing state and industry collaboration with research institutions, supporting clean-tech companies, offering more support to second-stage small businesses and promoting exports by small and midsize companies. An example of that commitment is 1871, Chicago’s largest tech innovation hub, which in 2014 received a pledge of $2.5 million from the State of Illinois for a major expansion to create workspace for digital entrepreneurs. 1871’s goal is to help build businesses to the point of self-sufficiency. Previously, the state contributed $2.3 million to help launch 1871. Venture capitalist J.B. Pritzker provided early funding, and the incubator also received support from companies such as CDW, Google and Comcast, among others.

“For the second time now, the state has stepped up and expressed confidence that we can continue to grow, create jobs and focus on these areas. We’re very excited,” says 1871 CEO Howard Tullman. Another example of the state’s commitment is MATTER, a not-for-profit bio hub that is driving entrepreneurship in the rapidly growing medical and biotech fields. The state has invested $4 million in MATTER as part of Gov. Pat Quinn’s agenda to create jobs and grow Illinois’ economy. Both MATTER and 1871 are located in Chicago’s Merchandise Mart.

“MATTER will enable a community of life-science entrepreneurs to come together and realize their dream of starting a company. MATTER will also be an economic boon to our city and state, leveraging the innovation from our world-leading teaching hospitals,” says Tim Walbert, Horizon Pharma Inc. chairman, president and CEO and a member of the Illinois Innovation Council.

Illinois has 20 incubators and tech parks such as 1871 and MATTER, along with public-private partnerships like the Illinois Science & Technology Coalition that provide grants, all intended to foster innovation and economic growth. The state also has 144 research centers and 71 federal labs, including Argonne National Laboratory and Fermi National Accelerator Laboratory, both leading research centers for advanced materials, biotech, and chemical and energy technology. One new 1871-based company has captured the public’s imagination in a big way. Gramovox, which makes a Bluetooth-enabled speaker resembling a 1920s-era gramophone, is working to build inventory, boost online marketing and scale up production to meet consumer demand. After exceeding its Kickstarter funding goal, Gramovox was invited to the Grammy Awards, where glowing reviews from celebrities helped spread the word on social media.