The trail makes it a cinch to explore the city by walking or cycling. 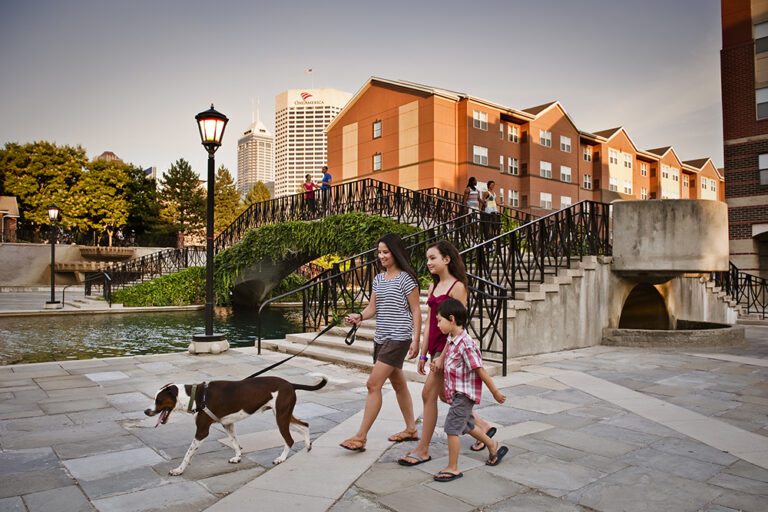 The city of Indianapolis is paved with miles of bike paths, trails and greenways that are interconnected with one another, but one in particular is a unique and special Indy attraction: the Indianapolis Cultural Trail. The trail is an urban network that winds its way through the city’s six cultural districts over 8 miles, and there’s no better way to explore Indy than by walking or cycling the trail.

“Each of the cultural districts have their own identities and were largely disconnected except by driving, but the idea blossomed to beautifully connect them and resulted in a collaborative effort,” says Lauren Day, a consultant for the Indianapolis Cultural Trail. “The trail officially opened in 2013 but the project was more than a decade in the making. The trail is a pedestrian, bicycle and ADA-accessible way to promote cultural experiences and economic development.”

The trail connects many Indianapolis landmarks, including the Madam Walker Legacy Center, the Indianapolis Zoo and White River Gardens, and the Lucas Oil Stadium, making them easy to get to without the hassle of driving or parking. Each of the six cultural districts is known for something different: Indiana Avenue was the home of a thriving jazz scene for more than a century; free spirited Mass Ave is full of public art, galleries and eclectic shops and restaurants; Market East is home to the City Market and City and County Building; the Wholesale District is a historic area known for its landmarks, cultural venues, and restaurants; White River State Park and The Canal are known for their natural landscape; and Fountain Square is a funky area known for its live music, art and independent shops and restaurants.

Created with a partnership of public funds from the USDOT and private philanthropic donations (in particular from Gene and Marilyn Glick, who donated $15 million to the project), the trail is the brainchild of Brian Payne, who wanted to connect the neighborhoods to encourage visitors and residents alike to explore Indianapolis and help foster a thriving community. Payne is the president and CEO of the Central Indiana Community Foundation (CICF), the fundraising arm behind the Cultural Trail and many other local projects. While the foundation manages the financial aspects of the project, the nonprofit Indianapolis Cultural Trail, Inc. manages the upkeep, maintenance and expansion of the trail.

The trail itself is beautiful (it’s been hailed as a model of linear park design) and includes areas planted with flowers, natural landscapes, public art installations, monuments and cultural displays combined with built-in access to different parts of the city. It often plays host to events like live music performances and offers various activities for people of all ages, like bocce ball and splash pads. It connects to cultural institutions and sports and entertainment venues alike.

“There is intentionally designed landscaping and a public art component throughout the trail, including the work of student, local and international artists,” says Day. “You can access it year-round and sometimes it’s the safest way to get around town that’s accessible to anyone.”

Another great feature is the Indianapolis Cultural Trail’s adaptation of the Pacers Bikeshare Program, which functions like a library, only with 525 bikes to check out and return at 50 stations peppered throughout the city.

“It’s the perfect solution to the logistical hurdle of transportation and parking,” says Ben Snyder, Senior Director of Marketing and Communications at the CICF, and who is also an almost daily user of the trail and the bike share program to commute around town. “The Cultural Trail connects all these destinations in a way that’s not only accessible but is more common sense than navigating city streets.”

In the years since the debut of the trail, the access it has granted to different areas of the city has increased revenue, jobs and property values. Trail users are also spurred to participate in a range of activities they may not have been as likely to do before, from dining in a new restaurant to attending a sporting event, to exploring a museum or simply taking a bike ride. Best of all, people like that the Indianapolis Cultural Trail offers a safe, accessible and aesthetically pleasing place to explore the many facets of the city.

“I love that it seamlessly connects neighborhoods that are all thriving in their own way and you can really experience downtown in a unique way,” says Snyder. “It’s not just convenient, but beautiful — you have the feeling of being in a park, surrounded by nature.”