How a New Path Changed a City 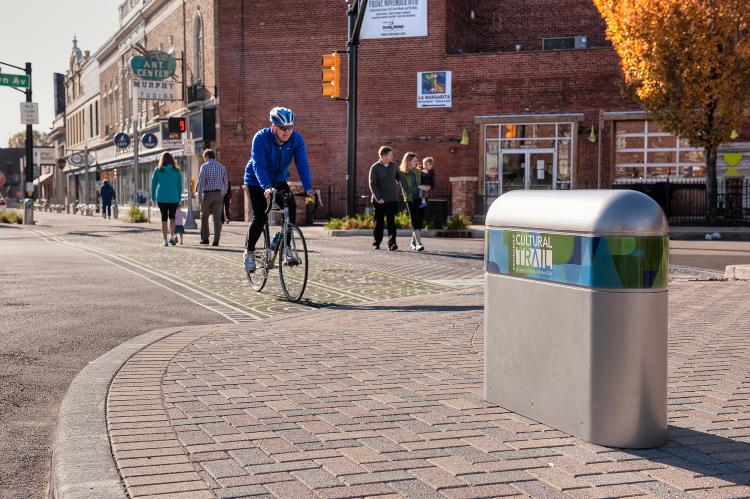 The new, 8-mile Indianapolis Cultural Trail is already an Indy icon, included in the New York Times “52 Places to Go in 2014″ feature. Divided into eight branches that meander through the city’s significant cultural and entertainment areas, it is graced with extensive landscaping, public art, attractive signage and even decorative crosswalks, making a walk or bike ride not just something good for your health, but good for your outlook on life, too. It also helped land Indianapolis on our list of the Top 10 Best Downtowns for 2014.

“It’s a lively, safe, fun space to be, and it’s so well built into the city landscape that people have adopted it as part of the rhythm of the city,” says Kären Haley, executive director of the Indianapolis Cultural Trail. “It makes people really proud to live in our city.” ​

On any given day, you’ll find residents strolling, hiking, jogging and biking their way through the heart of their city.

How the Trail Came to Be

The idea for the trail grew from a 1999 city initiative to promote Indy’s many cultural offerings. Cultural Development Commissioner Brian Payne, who often took his young son on walks along the city’s rail trail, the Monon Trail, realized that a downtown trail connecting the city’s six cultural districts could be a great way to bring them the attention they needed.

Groundbreaking began in 2007, and in May 2013, the last of the trail’s 8 miles were completed. The $63 million trail received federal transportation funds and private funding, including a $15 million initial gift from local philanthropists Eugene and Marilyn Glick, for whom the trail is named. As soon as it opened, the trail was a hit, exceeding even the rosiest expectations.

“Tourists, people who live downtown, people coming in from the suburbs, all love it,” Haley says. “Businesses have embraced it, and are building patios and sidewalk areas to take advantage of the trail traffic. People who live, work and play on it on a regular basis have seen first-hand how much it has helped our city.”

Brian Sullivan, who works downtown near the trail, lives right on it and frequently bikes and walks there, says the social aspect of the trail is also very appealing.

“It creates a lot more social interaction,” says Sullivan, who serves on the trail’s board. “You go out of your way to take the trail because it’s a much more attractive way to get from A to B, and you’re a lot more likely to encounter other human beings. It’s very pleasant.”

Bikers sometimes outnumber pedestrians on the trail, and soon there will be even more two-wheelers gliding by, when the trail opens its bike share program in spring 2014. Some 250 bikes, with distinctive Indianapolis decoration, will be able to be rented inexpensively for short period at stops along the trail.

“Since the Cultural Trail has some of the best bicycle trails in the world, having a bike share program was a likely fit,” Haley says. “People are excited – they see it as the missing piece of the trail.”