Skip to content
Home > IN > Kokomo > Affordable Places to Live > The Cost of Living Diaries: How Much Does It Really Cost to Move to Seattle?

The Cost of Living Diaries: How Much Does It Really Cost to Move to Seattle?

How much does it cost to live in Seattle? We asked someone who recently moved there to give us ALL the details. 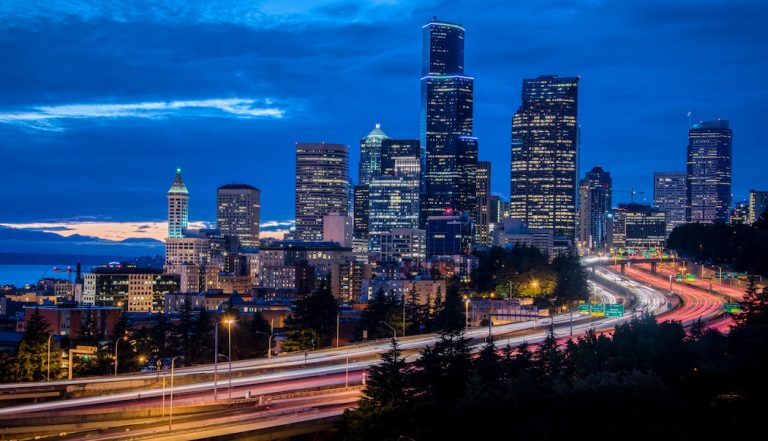 Are you thinking of moving to Seattle? Not sure how to swing moving to one of the most expensive cities in America? Read on for one woman’s story of relocating from a small city in Indiana to the suburbs of Seattle.

Job in Indiana: Was working full-remote as a Web Content Strategist for a mid-size health insurance company in Illinois.

Job in Seattle: When I moved in June 2017, I was still working full-remote for that company. I started working as a Content Writer for Microsoft in spring 2018, and I’m also still working part-time for my previous company running their social media for the extra money.

Rent/mortgage in Kokomo, Indiana: $680 for a 2-bedroom apartment, over 1,000 sq. ft., which included pet fees, split evenly with my partner.

Rent/mortgage in Issaquah, WA (suburb of Seattle): $1,900 for a 1-bedroom apartment, just over 700 sq. ft., which includes parking and pet fees, split evenly with my partner.

Our first year also included a free month’s rent as part of an initiative to fill their new apartment building, essentially eliminating a deposit on a brand new apartment. It also made it the cheapest apartment we looked at. (We’d set a budget of $1,600-1,700 baseline rent, before things like pets and parking costs.)

My significant other Matt is in the military reserves, and he got orders to switch to a unit here. We knew we’d live in the Seattle-area for our tech-related careers instead of right by his base.

Matt describes military moves as a rubberband. Months and months of build-up internally, and then SNAP, you have to move in two weeks.

So we literally flew out, picked an apartment in a weekend, packed up our apartment, drove to Illinois and packed up what we’d been storing with family there. Then we drove cross-country for three and a half days, unpacked, and bought and assembled IKEA furniture in less than two weeks.

The worst part of that type of move is that no matter what, you incur higher costs because it’s “last minute.” So we had more expensive flights, and we had to buy all of our moving boxes because we didn’t really have a “planning to move” window where we could collect them, etc.

That being said, both of us have lived in Chicago, I’ve lived in NYC, and we did our research. We knew the cost of living change we were signing up for. Luckily, he also had a buffer of savings to help make it possible, even though we were splitting costs in the long run.

What was it like looking for housing in Seattle?

Because we essentially only had one full day to find a place, we hired an agency to find and book us appointments, and then they picked us up (saving us a car rental), and took us everywhere. It also helped us look at suburbs without us having to be experts in the different neighborhoods before we arrived. For us, it was ideal.

We very specifically chose to live in the suburbs to save money, because we didn’t have jobs here yet, and some of the major tech companies are in the suburbs. We knew worst case scenario, we’d have a commute in the future.

In terms of quality, the rental market has been expanding in Seattle so quickly that I’ve never had an easier time looking at nice apartments. But in terms of price, it’s high for the amount of space. However, we decided that a gorgeous but small space that was within budget wouldn’t be a problem, and we still love it.

Paying for parking in the Seattle area is common. We pay $85 per month for our spot in the parking garage, and frequently spend around $10 to park when we venture into Seattle.

Produce is comparable in cost to the Midwest, but of a much higher quality because they grow so many things out here! We are also able to use Amazon Fresh, their grocery service, and many things are actually cheaper through them than at the grocery store nearby, and it gets delivered.

Eating and drinks out are much more expensive, but the options are so much greater than in Indiana that it’s made going out genuinely fun and different again. We do eat at home more than ever before, but honestly it’s because there’s fewer fast food options near us, and we have an amazing kitchen in our apartment, so it’s been good for us.

Flights to places you actually want to go for vacation, like California and Hawaii, are also much cheaper from Seattle.

This move really opened the door to better jobs for us. Between those and my extra work for my old company, we’ve significantly raised our incomes since we moved. So in the beginning, we really had to buy that furniture from IKEA. Now, we’ve been trying to make sure we’re buying higher quality versions of the things we need, so we can take them with us to our next place.

We’ve also started to save for a house, which is very expensive here, but we would like to step toward that in the not-so-far future. We’ve also been able to treat ourselves a bit more often, with date nights out every few weeks, and I’ve been able to significantly pay down debt. Since we’re both very career-focused at the moment, it’s been nice to make our home life a little more comfortable and start saving for the future.

What do you love about your new city?

Washington is phenomenally beautiful. We live between mountains, and even when it’s rainy, there’s pretty mist rolling over them, and there are lots of lakes nearby. It’s green year-round. Fall is beautifully colored and lasts more than a week (unlike the Midwest), and cherry-blossoms bloom everywhere in the Spring. The weather usually sits in a perfect warm range, and it only snowed twice last year, one of which was for Christmas.

There’s also so much more to do and see. I love live music, so I’ve been seeing shows every month or two. We live right across the street from all kinds of things, including the best Thai food in the area, a grocery store, and a little shopping center filled with individual-owned stores and restaurants. Plus top-tier restaurants, national parks, professional sports teams and more are just a short drive away.

What do you miss about the Midwest?

Besides friends and family, what we miss most is the pizza; the Midwest crunchy thin crust or deep dish are nonexistent. We also miss thunderstorms, visiting Chicago, and everything being 15 minutes away or less.   ,,,

We fell in love with Washington. We knew this move was a step in the direction we wanted to go, but we thought we might move on to California in a few years. But after living here, we think this is where we’d like to settle down. We love our jobs and the market for them, the environment, the style of houses and easy access to an awesome city.

What advice would you give to someone who’s interested in moving to a more expensive city?

Ask yourself honestly how much space you really need. Will being able to get out of the house more, into the outdoors and the city, make up for things like a spare bedroom or office?

Don’t forget to explore the suburbs which can help you save and offer more picturesque neighborhoods and convenience. Start following community boards and groups and join Nextdoor. You can find great deals on things like furniture and free or cheap events, live music, and more all over the city.